JavaScript Prototype Chains, Scope Chains, and Performance: What You Need to Know

Diego Castorina
Diego has been a senior freelance engineer for the likes of Italian telecom powerhouse Italtel. He also cofounded a web-based CRM business.
SHARE

JavaScript: More than meets the eye

But in truth, JavaScript is much less simplistic and more nuanced than most developers initially realize. Even for developers with more experience, some of JavaScript’s most salient features continue to be misunderstood and lead to confusion. One such feature is the way that data (property and variable) lookups are performed and the JavaScript performance ramifications to be aware of.

In JavaScript, data lookups are governed by two things: prototypal inheritance and scope chain. As a developer, clearly understanding these two mechanisms is essential, since doing so can improve the structure, and often the performance, of your code.

Property lookups through the prototype chain

When accessing a property in a prototype-based language like JavaScript, a dynamic lookup takes places that involves different layers within the object’s prototypal tree.

In JavaScript, every function is an object. When a function is invoked with the new operator, a new object is created. For example:

In the above example, p1 and p2 are two different objects, each created using the Person function as a constructor. They are independent instances of Person, as demonstrated by this code snippet:

Since JavaScript functions are objects, they can have properties. A particularly important property that each function has is called prototype. 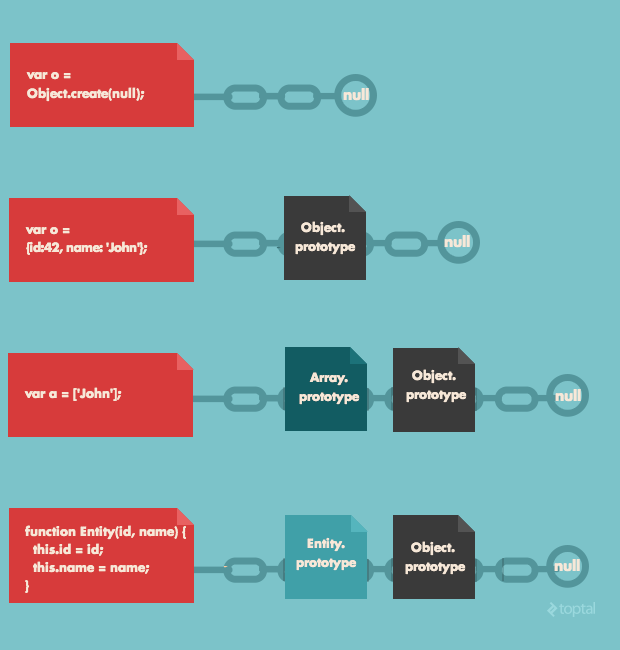 Each function’s prototype can be extended to define its own custom methods and properties.

When you instantiate an object (by invoking the function using the new operator), it inherits all the properties in the prototype of that function. Keep in mind, though, that those instances will not have direct access to the prototype object but only to its properties. For example:

There’s an important and somewhat subtle point here: Even if p1 was created before the getFullName method was defined, it will still have access to it because its prototype is the Person prototype.

Since the p1 instance of the Person object doesn’t itself have direct access to the prototype object, if we want overwrite getFullName in p1, we would do so as follows: 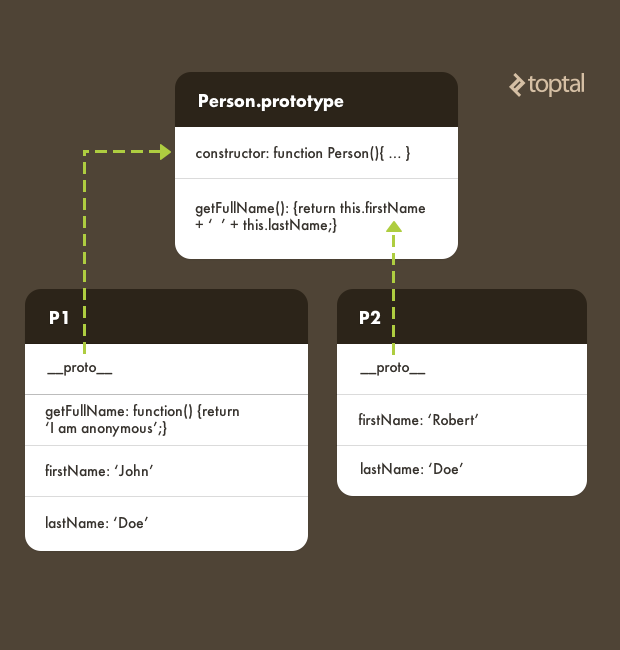 Another important thing to be aware of is that it’s also possible to dynamically change an object’s prototype. For example:

When using prototypal inheritance, remember to define properties in the prototype after having either inherited from the parent class or specified an alternate prototype. 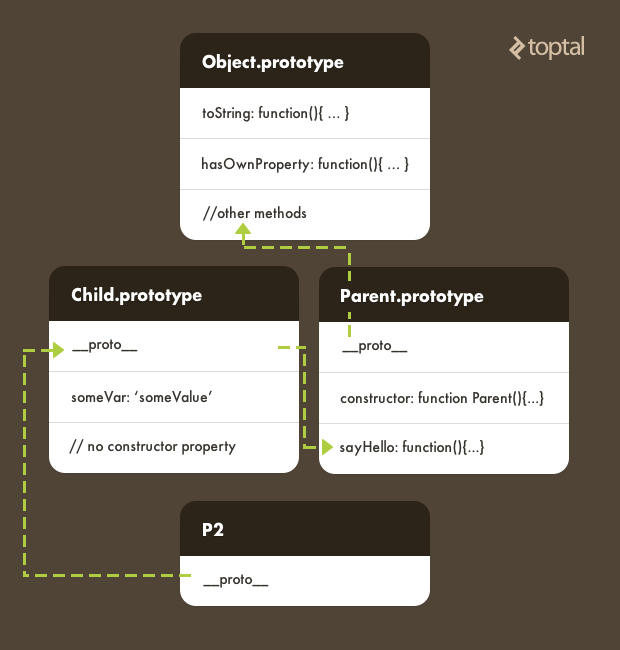 To summarize, property lookups through the JavaScript prototype chain work as follows:

Understanding how prototypal inheritance and property lookups work is important in general for developers but is also essential because of its (sometimes significant) JavaScript performance ramifications. As mentioned in the documentation for V8 (Google’s open source, high performance JavaScript engine), most JavaScript engines use a dictionary-like data structure to store object properties. Each property access therefore requires a dynamic look-up in that data structure to resolve the property. This approach makes accessing properties in JavaScript typically much slower than accessing instance variables in programming languages like Java and Smalltalk.

Variable lookups through the scope chain

Another lookup mechanism in JavaScript is based on scope.

To understand how this works, it’s necessary to introduce the concept of execution context.

In JavaScript, there are two types of execution contexts:

Within each execution context is a special object called a scope chain which is used to resolve variables. A scope chain is essentially a stack of currently accessible scopes, from the most immediate context to the global context. (To be a bit more precise, the object at the top of the stack is called an Activation Object which contains references to the local variables for the function being executed, the named function arguments, and two “special” objects: this and arguments.) For example: 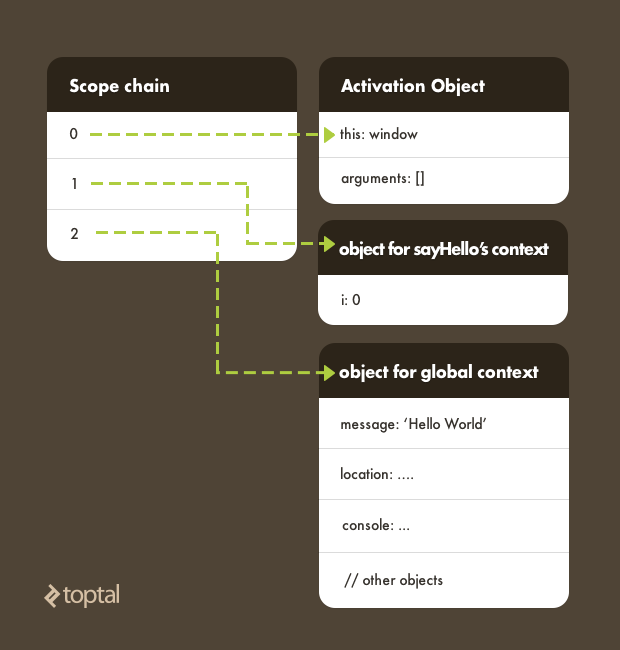 Note in the above diagram how this points to the window object by default and also how the global context contains examples of other objects such as console and location.

It is important to also note that a new scope is added to the scope chain when a try-catch block or a with block is encountered. In either of these cases, a new object is created and placed at top of the scope chain:

To fully understand how scope-based variable lookups occur, it is important to keep in mind that in JavaScript there are currently no block-level scopes. For example:

In most other languages, the code above would lead to an error because the “life” (i.e., scope) of the variable i would be restricted to the for block. In JavaScript, though, this is not the case. Rather, i is added to the activation object at the top of the scope chain and it will stay there until that object is removed from the scope, which happens when the corresponding execution context is removed from the stack. This behavior is known as variable hoisting.

It is worth noting, though, that support for block-level scopes is making its way into JavaScript through the new let keyword. The let keyword is already available in JavaScript 1.7 and is slated to become an officially supported JavaScript keyword as of ECMAScript 6.

The way that property and variable lookups, using prototype chain and scope chain respectively, work in JavaScript is one of the language’s key features, yet it is one of the trickiest and most subtle to understand.

The lookup operations we’ve described in this example, whether based on the prototype chain or the scope chain, are repeated every time a property or variable is accessed. When this lookup occurs within loops or other intensive operations, it can have significant JavaScript performance ramifications, especially in light of the single-threaded nature of the language which prevents multiple operations from happening concurrently.

In this example, we have a long inheritance tree and three nested loops. Inside the deepest loop, the counter variable is incremented with the value of delta. But delta is located almost at the top of the inheritance tree! This means that each time child.delta is accessed, the full tree needs to be navigated from bottom to top. This can have a really negative impact on performance.

Understanding this, we can easily improve performance of the above nestedFn function by using a local delta variable to cache the value in child.delta (and thereby avoid the need for repetitive traversal of the entire inheritance tree) as follows:

Of course, this particular technique is only viable in a scenario where it is known that the value of child.delta won’t change while the for loops are executing; otherwise, the local copy would need to be updated with the current value.

OK, let’s run both versions of the nestedFn method and see if there is any appreciable performance difference between the two.

We’ll start by running the first example in a node.js REPL:

So that takes about 8 seconds to run. That’s a long time.

Now let’s see what happens when we run the optimized version:

This time it took just one second. Much faster!

Note that use of local variables to avoid expensive lookups is a technique that can be applied both for property lookup (via the prototype chain) and for variable lookups (via the scope chain).

Moreover, this type of “caching” of values (i.e., in variables in the local scope) can also be beneficial when using some of the most common JavaScript libraries. Take jQuery, for example. jQuery supports the notion of “selectors”, which are basically a mechanism for retrieving one or more matching elements in the DOM. The ease with which one can specify selectors in jQuery can cause one to forget how costly (from a performance standpoint) each selector lookup can be. Accordingly, storing selector lookup results in a local variable can be extremely beneficial to performance. For example:

Especially on a web page with a large number of elements, the second approach in the code sample above can potentially result in significantly better performance than the first.

Data lookup in JavaScript is quite different than it is in most other languages, and it is highly nuanced. It is therefore essential to fully and properly understand these concepts in order to truly master the language. Data lookup and other common JavaScript mistakes should be avoided whenever possible. This understanding is likely to yield cleaner, more robust code that achieves improved JavaScript performance.

Related: As a JS Developer, This Is What Keeps Me Up at Night / Making Sense of ES6 Class Confusion

Originally from Italy, Diego spent several years working in The Netherlands before moving to Prague, in the Czech Republic. There he has been working as a senior freelance engineer in addition to working on his own company: a web-based CRM for small businesses.