How to Simplify Concurrency with Reactive Modelling on Android

Concurrency and asynchronicity are inherent to mobile programming.

Dealing with concurrency through imperative-style programming, which is what programming on Android generally involves, can be the cause of many problems. Using Reactive Programming with RxJava, you can avoid potential concurrency problems by providing a cleaner and less error-prone solution.

Aside from simplifying concurrent, asynchronous tasks, RxJava also provides the ability to perform functional style operations that transform, combine, and aggregate emissions from an Observable until we achieve our desired result. 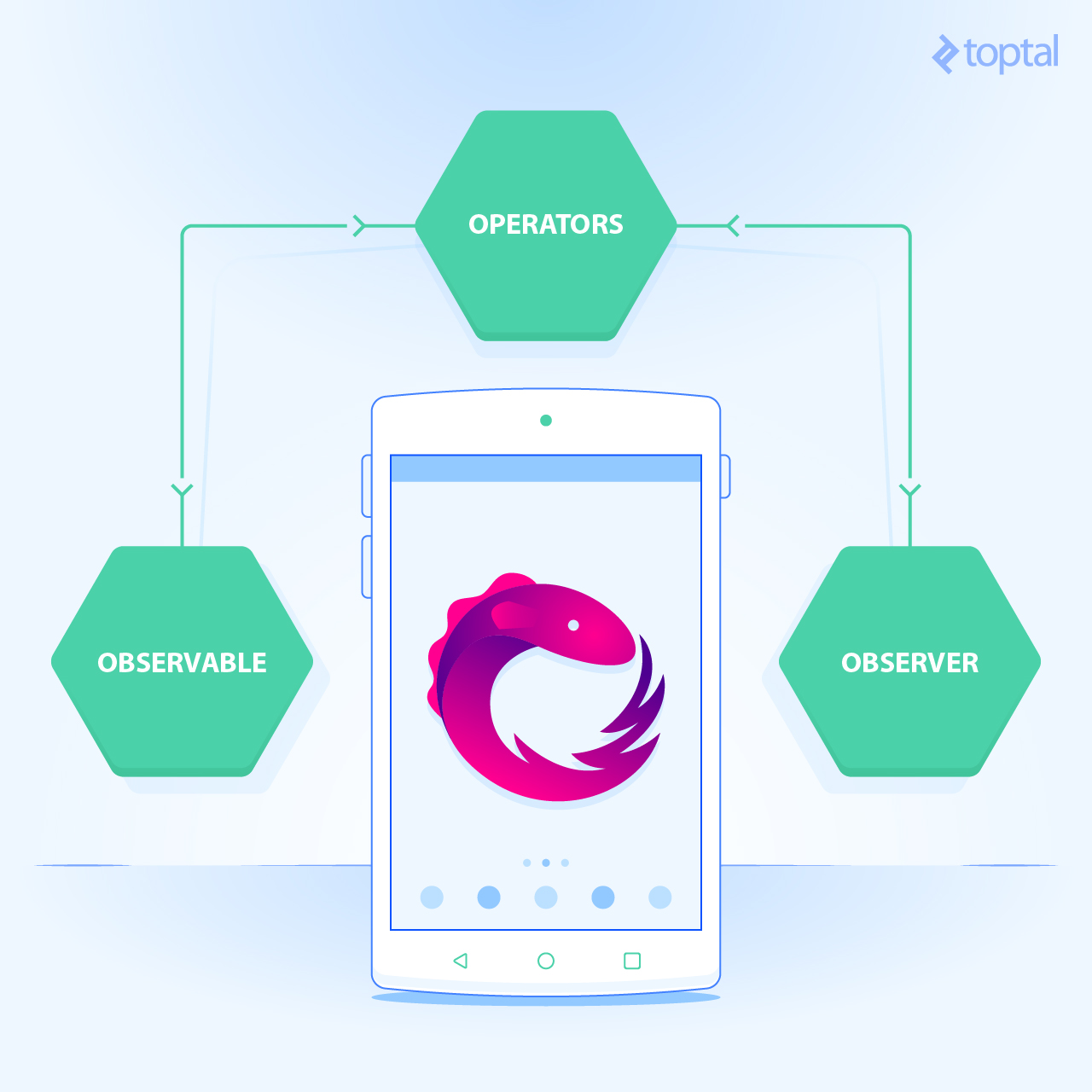 By combining RxJava’s reactive paradigm and functional style operations, we can model a wide range of concurrency constructs in a reactive way, even in Android’s non-reactive world. In this article, you will learn how you can do exactly that. You will also learn how to adopt RxJava into an existing project incrementally.

If you are new to RxJava, I recommend reading the post here which talks about some of the fundamentals of RxJava.

Bridging Non-Reactive into the Reactive World

One of the challenges of adding RxJava as one of the libraries to your project is that it fundamentally changes the way that you reason about your code.

RxJava requires you to think about data as being pushed rather than being pulled. While the concept itself is simple, changing a full codebase that is based on a pull paradigm can be a bit daunting. Although consistency is always ideal, you might not always have the privilege to make this transition throughout your entire code base all at once, so more of an incremental approach may be needed.

This function gets a list of User objects from the cache, filters each one based on whether or not the user has a blog, sorts them by the user’s name, and finally returns them to the caller. Looking at this snippet, we notice that many of these operations can take advantage of RxJava operators; e.g., filter() and sorted().

Rewriting this snippet then gives us:

The first line of the function converts the List<User> returned by UserCache.getAllUsers() to an Observable<User> via fromIterable(). This is the first step into making our code reactive. Now that we are operating on an Observable, this enables us to perform any Observable operator in the RxJava toolkit – filter() and sorted() in this case.

There are a few other points to note about this change.

Second, RxJava is designed with laziness in mind. That is, no long operations should be performed when there are no subscribers to the Observable. With this modification, that assumption is no longer true since UserCache.getAllUsers() is invoked even before there are any subscribers.

To address the first issue from our change, we can make use of any of the blocking operators available to an Observable such as blockingFirst() and blockingNext(). Essentially, both of these operators will block until an item is emitted downstream: blockingFirst() will return the first element emitted and finish, whereas blockingNext() will return an Iterable which allows you to perform a for-each loop on the underlying data (each iteration through the loop will block).

A side-effect of using a blocking operation that is important to be aware of, though, is that exceptions are thrown on the calling thread rather than being passed to an observer’s onError() method.

Using a blocking operator to change the method signature back to a List<User>, our snippet would now look like this:

Before calling a blocking operator (i.e. blockingGet()) we first need to chain the aggregate operator toList() so that the stream is modified from an Observable<User> to a Single<List<User>> (a Single is a special type of Observable that only emits a single value in onSuccess(), or an error via onError()).

Afterwards, we can call the blocking operator blockingGet() which unwraps the Single and returns a List<User>.

Although RxJava supports this, as much as possible this should be avoided as this is not idiomatic reactive programming. When absolutely necessary though, blocking operators are a nice initial way of stepping out of the reactive world.

As mentioned earlier, RxJava was designed with laziness in mind. That is, long-running operations should be delayed as long as possible (i.e., until a subscribe is invoked on an Observable). To make our solution lazy, we make use of the defer() operator. 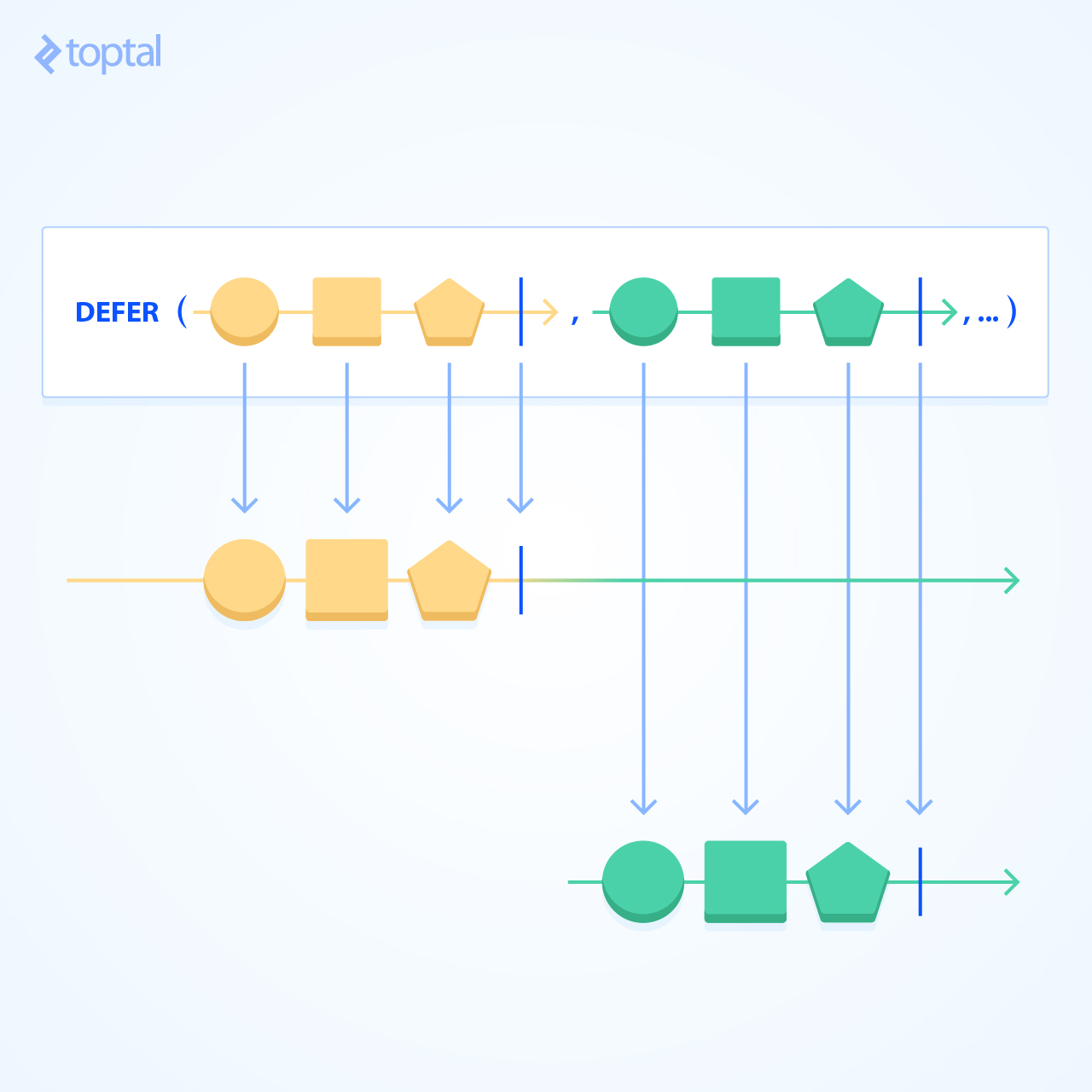 defer() takes in an ObservableSource factory which creates an Observable for each new observer that subscribes. In our case, we want to return Observable.fromIterable(UserCache.getAllUser()) whenever an observer subscribes.

Now that the long running operation is wrapped in a defer(), we have full control as to what thread this should run in simply by specifying the appropriate Scheduler in subscribeOn(). With this change, our code is fully reactive and subscription should only occur at the moment the data is needed.

Single using fromCallable() on a list would now return an Observable<List<User>>, we need to flatten this list using flatMap().

From the previous examples, we have seen that we can wrap any object in an Observable and jump between non-reactive and reactive states using blocking operations and defer()/fromCallable(). Using these constructs, we can start converting areas of an Android app to be reactive.

A good place to initially think of using RxJava is whenever you have a process that takes a while to perform, such as network calls (check out previous post for examples), disk reads and writes, etc. The following example illustrates a simple function that will write text to the file system:

When calling this function, we need to make sure that it is done on a separate thread since this operation is blocking. Imposing such a restriction on the caller complicates things for the developer which increases the likelihood of bugs and can potentially slow down development.

Adding a comment to the function will of course help avoid errors by the caller, but that is still far from bulletproof.

Using RxJava, however, we can easily wrap this into an Observable and specify the Scheduler that it should run on. This way, the caller doesn’t need to be concerned at all with invoking the function in a separate thread; the function will take care of this itself.

Using fromCallable(), writing the text to file is deferred up until subscription time.

Since exceptions are first-class objects in RxJava, one other benefit of our change is that the we no longer need to wrap the operation in a try/catch block. The exception will simply be propagated downstream rather than being swallowed. This allows the caller to handle the exception a he/she sees fit (e.g. show an error to the user depending on what exception was thrown, etc.).

To complete the operation, we use the fromAction() operation of a Completable since the return value is no longer of interest to us. If needed, like an Observable, a Completable also supports the fromCallable() and defer() functions.

How might we convert areas in our app, though, that receive continuous updates or events (such as location updates, view click events, sensor events, and so on)?

We will look at two ways to do this, using create() and using Subjects.

create() allows us to explicitly invoke an observer’s onNext() | onComplete() | onError() method as we receive updates from our data source. To use create(), we pass in an ObservableOnSubscribe which receives an ObservableEmitter whenever an observer subscribes. Using the received emitter, we can then perform all the necessary set-up calls to start receiving updates and then invoke the appropriate Emitter event.

The function inside the create() call requests location updates and passes in a callback that gets invoked when the device’s location changes. As we can see here, we essentially replace the callback-style interface and instead emit the received location in the created Observable stream (for the sake of educational purposes, I skipped some of the details with constructing a location request, if you want to delve deeper into the details you can read it here).

One other thing to note about create() is that, whenever subscribe() is called, a new emitter is provided. In other words, create() returns a cold Observable. This means that, in the function above, we would potentially be requesting location updates multiple times, which is not what we want.

To work around this, we want to change the the function to return a hot Observable with the help of Subjects.

In this new implementation, the subtype PublishSubject is used which emits events as they arrive starting from the time of subscription. Accordingly, if a subscription is performed at a point when location updates have already been emitted, past emissions will not be received by the observer, only subsequent ones. If this behavior is not desired, there are a couple of other Subject subtypes in the RxJava toolkit that can be used.

In addition, we also created a separate connect() function which starts the request to receive location updates. The observeLocation() can still do the connect() call, but we refactored it out of the function for clarity/simplicity.

We’ve looked at a number of mechanisms and techniques:

Hopefully, the examples provided in this article inspired some ideas regarding different areas in your app that can be converted to be reactive. We’ve covered a lot and if you have any questions, suggestions, or if anything is not clear, feel free to leave a comment below!

If you are interested in learning more about RxJava, I am working on an in-depth book that explains how to view problems the reactive way using Android examples. If you’d like to receive updates on it, please subscribe here.

Christopher is a mobile engineer with over seven years of experience creating native Android and iOS applications. He has a strong product sense and an eye for design. His portfolio includes a social network with millions of users, to real-time messaging and more. He also is a strong advocate of RxJava and is currently writing a book called "Reactive Programming on Android with RxJava" (https://leanpub.com/reactiveandroid).

Adib Faramarzi
You should also handle the unsubscription in the LocationManager example (when using observable create)
Chris Arriola
Yes, that is something you want to include as well. I left it out for brevity since the purpose of the example was to show how you can use Observable#create() to wrap an async operation. To unsubscribe when there are no longer any subscribers you'd want to do (also need to set the LocationListener to a variable, say `locationListener`): ``` emitter.setDisposable(Disposables.fromAction(() -> { LocationServices.FusedLocationApi.removeLocationUpdates(googleApiClient, locationListener); })); ```
comments powered by Disqus

Are you an Android developer?