A Guide to npm: The Node.js Package Manager

Martin Gouws
Martin is a young and talented JavaScript developer and software engineer who has his roots in enterprise Java.
SHARE

JavaScript is easily the most used language when it comes to the development of websites and web applications. The multitude of resources are astounding, and even more so, the number of libraries available.

At first, these libraries are few and easy to maintain; however, soon enough dependency hell sets in and a more mature solution is required. 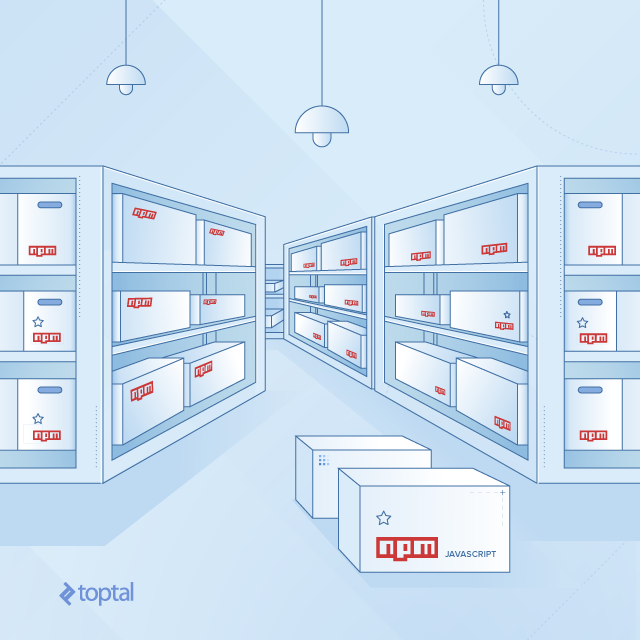 Enter the Node Package Manager (npm) – a JavaScript package manager most notably used in conjunction with Node.js, although it can be used independently as well. It gives you exceptional control over your project’s dependencies and provides a great way to contribute to the open-source world.

You can get started by simply running npm install <package name> and injecting it into your JavaScript file.

Want to install a package globally (like Mocha, or Angular-CLI)? Just add a -g like so: npm install -g angular-cli mocha.

Admittedly, most use cases stop at an npm install, and there isn’t a need for anything else. However, npm has loads of additional features, which I’ll walk you through, highlighting those I consider essential, really useful, or just plain awesome.

The CLI is where users spend most of their time interacting with npm, and its help interface is actually helpful.

Querying help (npm help) spews out an entire array of options, and running npm help-search <searchText> gives you a list of search results direct from the npm markdown.

Here are the core commands that stand out.

Note that most of these commands can take subcommands and/or configurations, and this list is by no means an end-all discussion on the CLI.

Configuration is a major part of npm, and there are multiple ways configuration variables can be set.

Configuration via CLI and Environmental Variables

First, configuration can be set via the CLI from the terminal.

Typically it would look something like this: npm <command> --<configuration option> [<optional value>].

If the value is not specified, the option will be set to true by default.

For example, let’s say that you are working on a scoped (private) npm package, and you decide to publish it as a public package.

This is easily done by appending --access=public to your publish command. If we did not specify the property to be public, the default would be restricted (private).

Configuration appended to other commands like this does not persist everywhere, so it can become tiresome to set an array of configurations via the CLI.

In those cases, it may be better to set configuration using environmental variables.

Any environmental variable set with the npm_config_ prefix will be used to configure npm.

For example: export npm_config_registry=localhost:4321 would set the registry configuration option globally, and when npm is executed it will use the npm registry located at localhost on port 4321.

Configuration via the npmrc file

You can also set configuration options using the special .npmrc file, which can be set at different levels depending on your requirements:

Configuration settings in the .npmrc file can be modified and persisted using the CLI by running a command in this format: npm config set <key> <value>.

For example, you can run npm config set access public to make the publishing configuration of a scoped (private) package persistently public.

By default, this command would persist the configuration locally (the user level configuration as described above), but you can add -g to persist it globally.

When persisted configuration needs to happen on the project level, or on the built-in level, the .npmrc file must be modified using a text editor.

Finally, configuration can be set from the package.json file. However, this is seldom used (and should only be used if explicitly required), because a project level .npmrc file is the conventionally prefered place to set package configuration.

You can also use npm to update itself.

Simply run npm install -g [email protected], and npm will be updated to the latest stable release. It is important to note that each version of Node.js ships with a specific version of npm, and in my experience, you shouldn’t mess with that pairing too much.

At the end of the day, my recommendation is to stick with the pairing as they are intended.

When using npm as a standalone tool, make sure you understand the implications of using whatever version you choose. There is a great tool for managing different Node.js versions (and in turn npm versions) on the same system called nvm.

The package.json file is the crucial element that links everything together.

It’s a requirement for publishing a package to the npm registry, and it’s where the management part of dependencies comes to life.

It has two required fields, namely “name” and “version,” and together these properties should be a unique identifier.

The name field should adhere to certain rules, as defined by the npm documentation on naming, and the version field is subject to the semver specificiations. 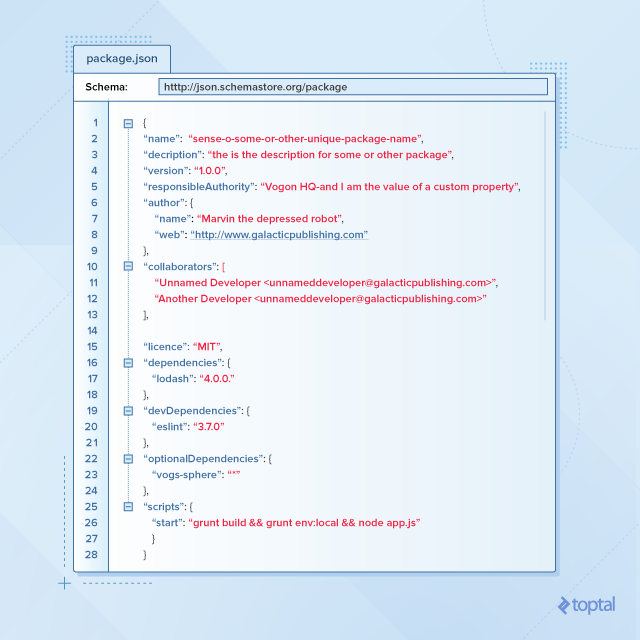 Over and above that, you can have a list of dependencies a mile long, and define a specific version to be used for each of them, using the semver versions and range operators. Here’s a list of other notable properties.

“main” defines the entry point to your application, which defaults to index.js. Depending on convention or your framework, it might be app.js or main.js. You can, of course, make it anything you want.

This is an underrated property.

First, it can be used to do things on prepublish.

Second, it provides a place where you can alias an array of frequently used commands, ranging from build tasks (defined in gulp or grunt), triggering the installation of other dependencies (with something like bower), starting a development server with webpack, or running a set of bash commands.

This property is a list of packages needed by your application, along with the compatible semver number. It is a notable property because it can be modified from the terminal when you install local packages.

This is done by adding --save (or the shorthand -S) at the end of the npm install command.

When you do this, the newly install package(s) gets added to the list of dependencies in your package.json file.

Similarly a dependency can also be removed by adding --save when running the npm uninstall command.

It is important to be aware of the semver versioning patterns of each of the dependencies and what they mean.

A broken package install can prove to be quite difficult to resolve, especially when the minified version of the package is used.

Separate from the dependencies property, the “devDependencies” property allows you to define dependencies that are only used during the development phase and are not required for the production build (like ESLint, grunt-contrib packages, and Protractor). Just as with dependencies, this property can be modified from the terminal by adding --save-dev (or the shorthand -D) to the end of the npm install command or the npm uninstall command. The same caution applies to versioning as mentioned under dependencies.

This is where you can specify your package’s executable file(s), like the path to a CLI utility. This property tells npm to create local or global symlinks to your executables when your package is installed.

As discussed earlier, this is where you define configuration settings though your package.json file.

When set to true, npm will refuse to publish the package.

This should not be confused with the access configuration setting.

This is a handy setting when you have a project that utilizes npm along with its package.json but it is not intended to be published to the npm registry, either scoped or public.

If your intention changes, simply change the setting to false, and you will be able to publish your package.

The package.json file also accepts custom properties, as long as the name is not already defined or reserved.

Developing Your Own npm Package

The npm ecosystem is filled with packages, written by thousands of different developers around the world. Each solves some sort of problem, providing an abstraction, or presenting an implementation of something.

Chances are that, at some point, you too will want to develop your own package to share.

First, you need to author a package.json file with the minimum required properties of “name” and “version”, and then the “main” property to specify the entry point, for example index.js.

Write your code in that index.js file, login with your npm user account, or create a new user from the terminal, and you are ready to publish it to the npm registry.

Packages can be public or private.

Public packages are free to publish and are available for everyone to utilize.

Private packages, called scoped packages, can only be published if you paid private modules user, and they can be identified by the distinct @username/ that is prepended to the package name.

Scoped packages can also be published publically by calling the publish command with --access=public.

Furthermore, if you spend some more time expanding and improving your package’s code base, and it is time for a new version to be published, you simply alter the version (as per the semver rules and convention) of the package in the package.json file and type npm publish.

You can also use the command line interface and call npm version <update_type>, where update_type is either patch, minor, or major, as described by semver, and this then automatically increments the version number in the package.json file.

Again, the npm documentation for this is excellent, and it would be futile to just repeat their words.

What can be said about organizations in the npm context is that it is extremely fine grained, and when managed correctly, large teams and individuals, working on scoped or public packages under one name, can be very well managed and restricted.

While it is complex to master, it’s very rewarding.

The Power of npm

Ultimately the documentation that npm provides is extensive and should be consulted for specifics, but this article provides a useful overview of both basic and more advanced, involved functionality, conveying the awesomeness of npm.

As with all things, strong opinions exist and many faults can be found. But if you have never tried npm (or node, for that matter), dive in, and explore it for yourself. Chances are you’ll enjoy it more than you think.

Martin is a young and talented JavaScript developer and software engineer who has his roots in enterprise Java. He has a mature understanding of the full SDLC and has helped build many applications from scratch for clients such as Anglo American. He has worked in corporate as well as startup environments, and transparent communication is always prevalent in his work ethic. He is also an advocate of the Agile development mindset.