Demir Selmanovic
Demir is a developer and project manager with over 15 years of professional experience in a wide range of software development roles.
SHARE

In an inspiring keynote, Facebook founder Mark Zuckerberg shared his vision of the future of sharing at the traditional Facebook developers gathering, which was held in San Francisco on March 25th and 26th. This field started with text over images, and now videos are taking the mainstage. The future is inevitably related to sharing videos, and what would be better than sharing real-time streamed VR directly to your friends and family?

Facebook has invested a lot in VR technology; they purchased Oculus Rift, and are working extensively on projects related to it. Today, we are happy to inform our community that Toptal has taken its place as a strategic partner in this effort to connect the world. Our vision of a distributed and office-less company with developers spread all over the globe has proven to be an amazing match to Facebook’s attempts to connect people worldwide. 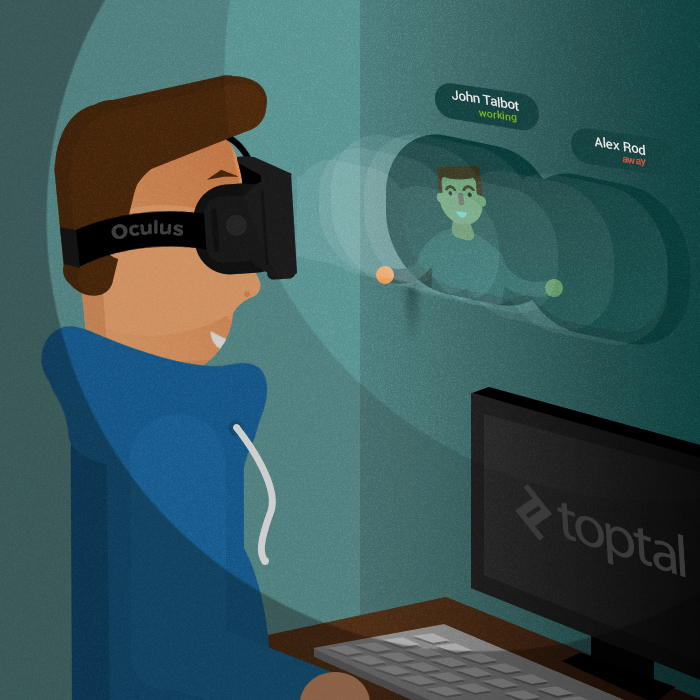 Over the past 4 months, Toptal has conducted a real-life test of creating a global virtual office, in which we included our 100 top developers. We asked our developers to spend a few hours each day working in the VR office, together with the rest of their team, and compare the experience with the way they worked before. The results were eye-opening, and helped to identify several weaknesses in Toptal’s approach to remote working.

There and Back Again

One of the most revealing things was the fact that remote workers were not as effective as we had previously believed. Toptal CEO Taso Du Val commented, saying this experiment was one of the most important breakthroughs in his career.

“Toptal has been promoting a remote work culture for years, supporting the digital nomad lifestyle of its developers all over the world. However, the results we got from this trial showed that we have been wrong. People seem to be much more effective and happier when working in an office, and we are now considering the best options for building our first Toptal office.”

The experiment with a VR office helped identify some interesting sociological aspects of remote developers. According to Kenan Salihbegovic, the Head of Community at Toptal, “Developers started communicating in code snippets and they rarely, if ever, interacted with people outside of chat rooms. We are spending a great deal of effort sponsoring conferences and meetups in order to overcome this problem. However, developers seem to ignore these events and very few of them ever show up.”

How Did We Make It Happen?

We still believe that developers do not have to be in the same physical location, but after the revelation that working in an office surrounded by people is more productive, we decided to take it to the next level. If we were wrong about how people work, what if we were also wrong about how people get to work? This question led to another great experiment. We asked our developers to simulate 1 hour commuting up and down 101 (a well known street in San Francisco) in our virtual bus. The results were amazing! It proved that well motivated developers who travel together come up with great ideas and creative solutions while driving to work. This showed another reason why having a physical workplace to commute to can be useful, if done properly.

Of course, this was a big step for everyone involved in the experiment, and it had many obstacles. Toptal COO Breanden Beneschott managed the entire project, and shared some interesting insight:

“A lot of people have been puking during the first few days, and it’s been a tough transition working while using Oculus VR all the time, but ultimately we feel that everyone else has been right all along. You really need an office to be productive.”

Without trying to hide enthusiasm, he continued:

“Thankfully, the transition has allowed us to really specialize and focus much better than when we were remote. As COO before, I was constantly focused on growth and building things. Now I can focus on making the best possible virtual seating arrangements and optimal virtual lighting.”

Thanks to our strategic partnership with Autodesk, we received access to the best 3D artists in the world. They were very happy to take part in creating our 3D office building down to smallest details.”

Our developers worked together with the Facebook team to create the next generation of Oculus software. Our own Gergely Kalman used his experience in high-performance video streaming to deliver the software development environment directly to VR via the Oculus interface. 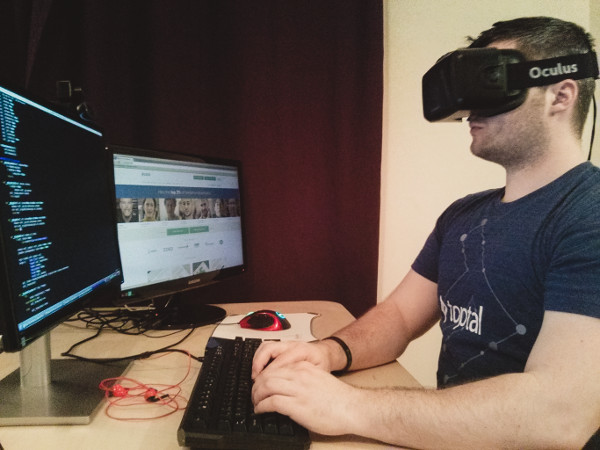 The Toptal product development team, with CTO Alexander Danilenko, took this experiment even further. They decided to use VR during all of their work hours. During the trial, they implemented some of the most important changes on the platform in the past 2 years. According to Alexander, “we have delivered more code in the 4 months in VR than we have been able to do in 12 months. The next step shall be installing.”

Some teams were less successful than others. Our Content team, led by Demir Selmanovic, was one of the last to fully embrace the benefits of a VR office. Due to their frequent contacts with the development community, it was difficult to switch back and forth between the VR office and the “real” world. Demir shared his view with the Facebook account manager, who was not very happy about it - “Oculus Rift and VR in general should be forbidden, as they are distracting us from the real world. If I could, I would ask our authors to mail their articles written by hand”, Demir told him. However, we are certain that everything will be much simpler when all of our developers join our Oculus project and meetings start taking place in VR rooms.

Truly, the future is bright, and VR technology is here to stay. Toptal has decided to get on board and once again pioneer uncharted territories, while still delivering amazing software and services to our clients. Our world-class developers, the top 3% worldwide, once again proved that they are up to the task.

We are proud to lead the way at the frontier. Toptal was one of the first to go all-in when remote working became “the way to work”, and we are happy to lead the way back to the office.

It is true that we will have to impose some constraints on our developers and introduce fixed office hours - but we believe that this is a good thing now. Our research showed that too many distractions, traveling, and enjoying the nomad lifestyle is distracting and inefficient. To quote Breanden once again, “I was wrong when I was writing about the traveling engineer life. Being remote and encouraging people to travel and pursue their lifelong dreams now might be bad, because the human brain can only handle so much distraction.”

Our research shows that over 90% of our engineers do not really travel. They mostly work from home, and giving them the option to virtually drive to work together, collaborate in their offices, and even take a lunch break together is just a great bonus.

In the long run, Toptal will have its own office building, and we plan to bring in as many of our developers as possible to work in the Toptalplex. Until that dream comes true, we will provide the Oculus Rift to all Toptal developers by the end of this year, and make VR a standard way of collaboration in our company. If anyone is interested in early access, please send us an e-mail at oculus(at)toptal.com, and we will try to prioritize accordingly.

To all of you members of the Toptal network, we wish you a happy April 1st, the international day of jokes. May the force be with you, live long and prosper.

Demir is a developer and project manager with over 15 years of professional experience in a wide range of software development roles. He excels as a solo developer, team member, team leader, or manager of multiple distributed teams. He works closely with clients to define ideas and deliver products.

John Ginsberg
Very clever :)
Mohammed Ibrahimali
Bravo..
Bret Stancil
This is hysterical. "Now I can focus on making the best possible virtual seating arrangements and optimal virtual lighting." Finally, a noble use for Breanden's time.
acc soleh
I really liked your article about Toptal and Facebook - Creating a Global Virtual Office. Thanks Demir <a href="http://ipapa.co.id/search/virtual-office-jakarta">virtual office jakarta</a>
Angelina Heyne
Really interesting! Thanks... One can also learn about <a href="http://www.vos.net.au/services/social-media/">Social Media Virtual Assistant</a>
comments powered by Disqus