George Vashakidze
George is an extremely motivated and hardworking mobile developer with extensive experience working with iOS and Android.
SHARE

A couple of years ago I was working on an app called “BOG mBank - Mobile Banking” with my iOS/Android team. There is a basic feature in the app where you can use the mobile banking functionality to top up your own cell phone postpaid balance or any contact’s cell phone balance.

While developing this module, we noticed that it was much easier to find a particular contact in the Android version of the app than in iOS one. Why? The key reason behind this is T9 search, which is missing from Apple devices.

Let’s explain what T9 is all about, and why it probably didn’t become a part of iOS, and how iOS developers can implement it if necessary.

T9 is a predictive text technology for mobile phones, specifically those that contain a physical 3x4 numeric keypad.

T9 was originally developed by Tegic Communications, and the name stands for Text on 9 keys.

You can guess why T9 probably never made it to iOS. During the smartphone revolution, T9 input became obsolete, as modern smartphones phones relied on full keyboards, courtesy of their touchscreen displays. Since Apple never had any phones with physical keyboards and wasn’t in the phone business during the heyday of T9, it’s understandable this technology was omitted from iOS.

T9 is still used on certain inexpensive phones without a touchscreen (so-called feature phones). However, despite the fact that most Android phones never featured physical keyboards, modern Android devices feature support for T9 input, which can be used to dial contacts by spelling the name of the contact one is trying to call.

An Example of T9 Predictive Input in Action

On a phone with a numeric keypad, each time a key (1-9) is pressed (when in a text field), the algorithm returns a guess for what letters are most likely for the keys pressed to that point.

This is an example of a letter changing while entering words.

Programmatic Use of T9 in iOS

So, let’s dive into this feature and write an easy example of T9 input for iOS. First of all, we need to create a new project.

The prerequisites needed for our project are basic: Xcode and Xcode build tools installed on your Mac.

To create a new project, open your Xcode application on your Mac and select “Create a new Xcode project,” then name your project, and choose the type of application to be created. Simply select “Single View App” and press Next.

On the next screen, as you can see there will be some info that you need to provide.

Note: If you do not have a developer account, you can run this on Simulator as well.

Press the Next button, and we are ready to start.

As you already know, when you create a new app, you already have MainViewController class and Main.Storyboard. For testing purposes, of course, we can use this controller.

Before we start designing something, let’s first create all the necessary classes and files to make sure we have everything set up and running to move to the UI part of the job.

Somewhere inside your project, simply create a new file called “PhoneContactsStore.swift” In my case, it looks like this. 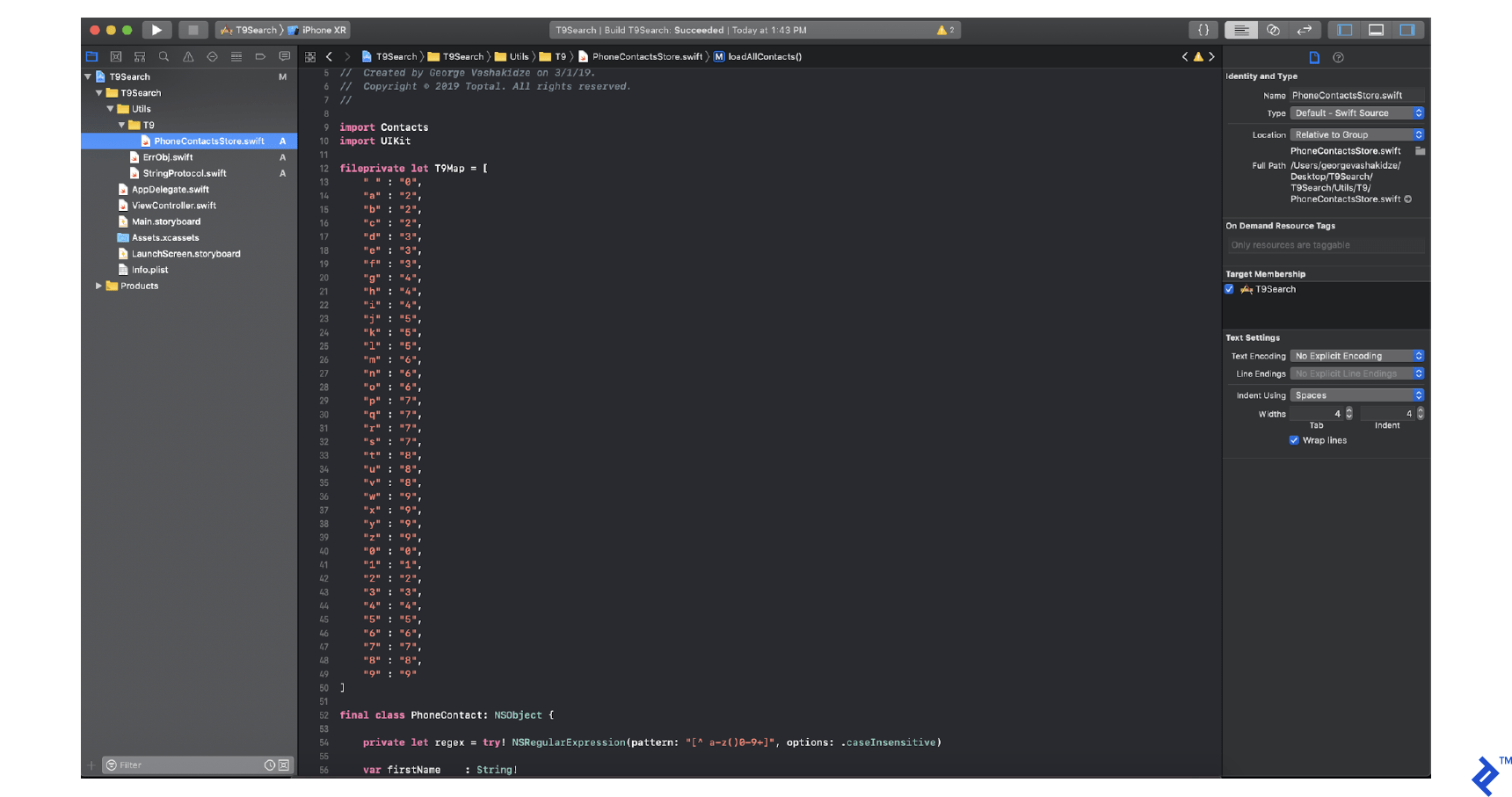 Our first order of business is to create a map with all variations of numeric keyboard inputs.

That’s it. We’ve implemented the complete map with all variations. Now, let’s proceed to create our first class called “PhoneContact.” 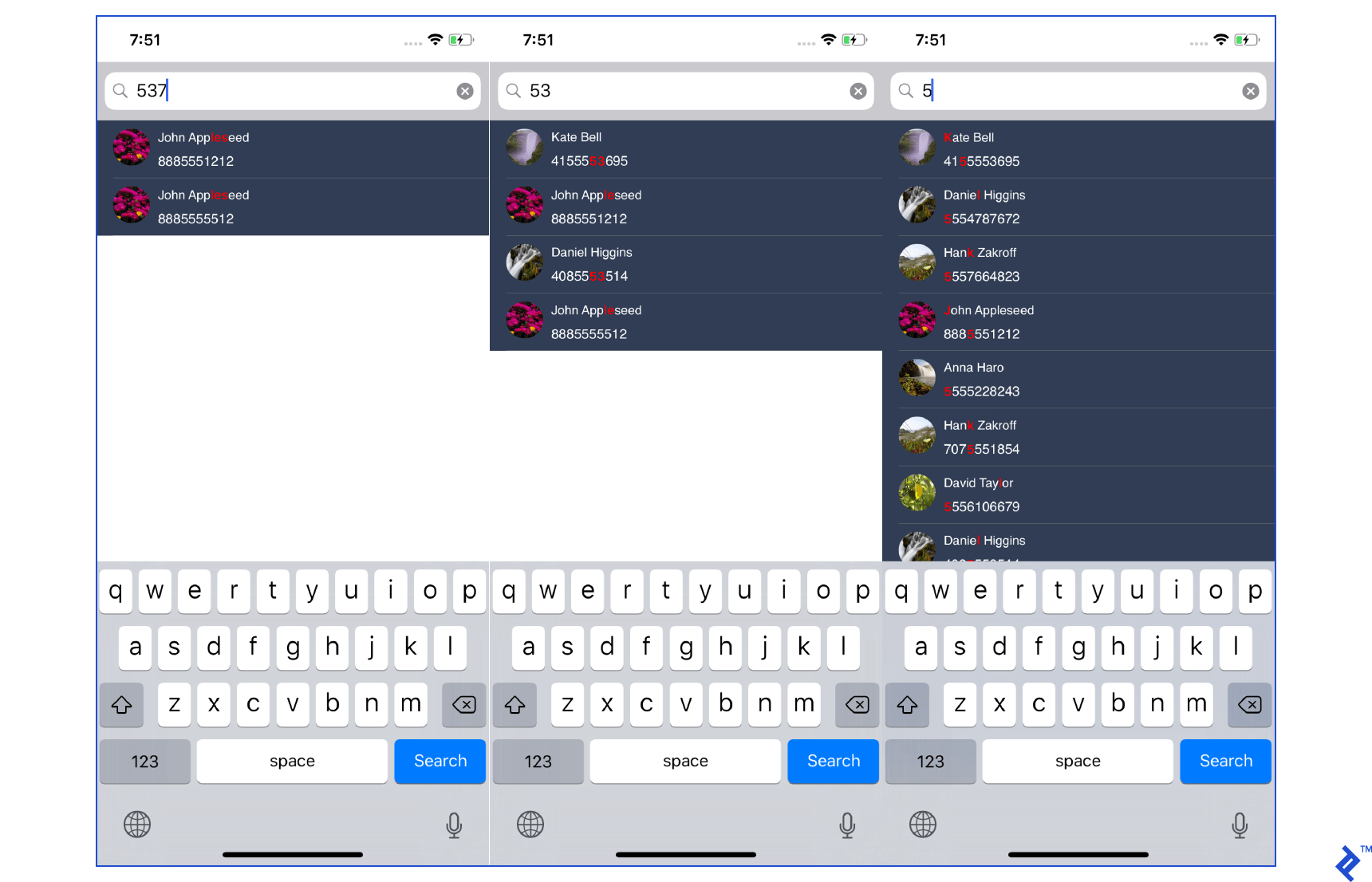 Basically, the user has default properties that need to be displayed:

Make sure you have overridden hash and isEqual to specify your custom logic for list filtering.

Also, we need to have the replace method to avoid having anything except numbers in the string.

Now we need one more method called calculateT9, to find contacts related to fullname or phonenumber.

After implementing the PhoneContact object, we need to store our contacts somewhere in the memory. For this purpose, I am going to create a new class called PhoneContactStore.

We will have two local properties:

I am using Set to make sure there is no duplication during filling out this data source.

As you can see, this is a Singleton class, which means we keep it in memory until the app is running. For more information about Singletons or design patterns, you could read here.

We are now very close to having T9 search finalized.

Putting It All Together

After we have authorized to access contacts, we can write the method to get the list from the system.

We have already loaded the contact list into the memory, which means we can now write a simple method:

Now we can use T9 search inside UIViewController.

And here is the last part of our brief tutorial, UITableView implementation:

This concludes our T9 search tutorial, and hopefully you found it straightforward and easy to implement in iOS.

But why should you? And why didn’t Apple include T9 support in iOS to begin with? As we pointed out in the introduction, T9 is hardly a killer feature on today’s phones - it’s more of an afterthought, a throwback to the days of “dumb” phones with mechanical number pads.

However, there are still a few valid reasons why you should implement T9 search in certain scenarios, either for the sake of consistency, or to improve accessibility and user experience. On a more cheerful note, if you’re the nostalgic kind, playing around with T9 input could bring back fond memories of your school days.

Lastly, you can find the complete code for T9 implementation in iOS at my GitHub repo.

What is predictive text?

Predictive text is an input technology where one key or button represents many letters, such as on numeric keypads used on older mobile phones. It is also used to improve accessibility in certain scenarios.

Why is T9 called that?

T9 stands for Text on 9 keys, as it relies on a 9-digit numeric keypad for text input.

How do I use T9 on my keyboard?

Here’s a quick example. For "HELLO," you would only need to press 4-3-5-5-6. These are the numbers containing the letters that spell "HELLO."

George is an extremely motivated and hardworking mobile developer with over six years of experience working with iOS and Android. He is a very results-driven individual and always strives to bring about the maximum amount of customer satisfaction. George is quick to pick up new technologies and can effortlessly adapt to new development environments.

Dudu Vashakidze
Hi Phil. Yes, I've tried <b>Trie</b>, this is just simple implementation. looks easy for all to understand. Anyway, thanks for your reply
Phil Pirozhkov
Have you considered using Trie?
comments powered by Disqus