The Salesforce Release Train: A Practical Approach to Release Management

Ajinkya Deshmukh
Ajinkya is a senior Salesforce developer and architect. He is skilled at advanced Apex programming, Visualforce, and Lightning development.
SHARE

Release management, as the name suggests, is the process of managing, planning, scheduling and controlling a software build through different stages and environments; including testing and deploying software releases (Humble & Farley, 2011).

It is a pretty big topic in itself and can only be perfected over time by trying different iterations with the development teams and matching business needs or feature releases. We will try to cover the industry practices of metadata management, CI building, and sandbox management for managing an organization’s release train.

But what is a release train?

A release train is an incremental and predictable feature delivery technique. It requires the developer to set up a formal process to take any changes made in the development environment and deploy them to production. 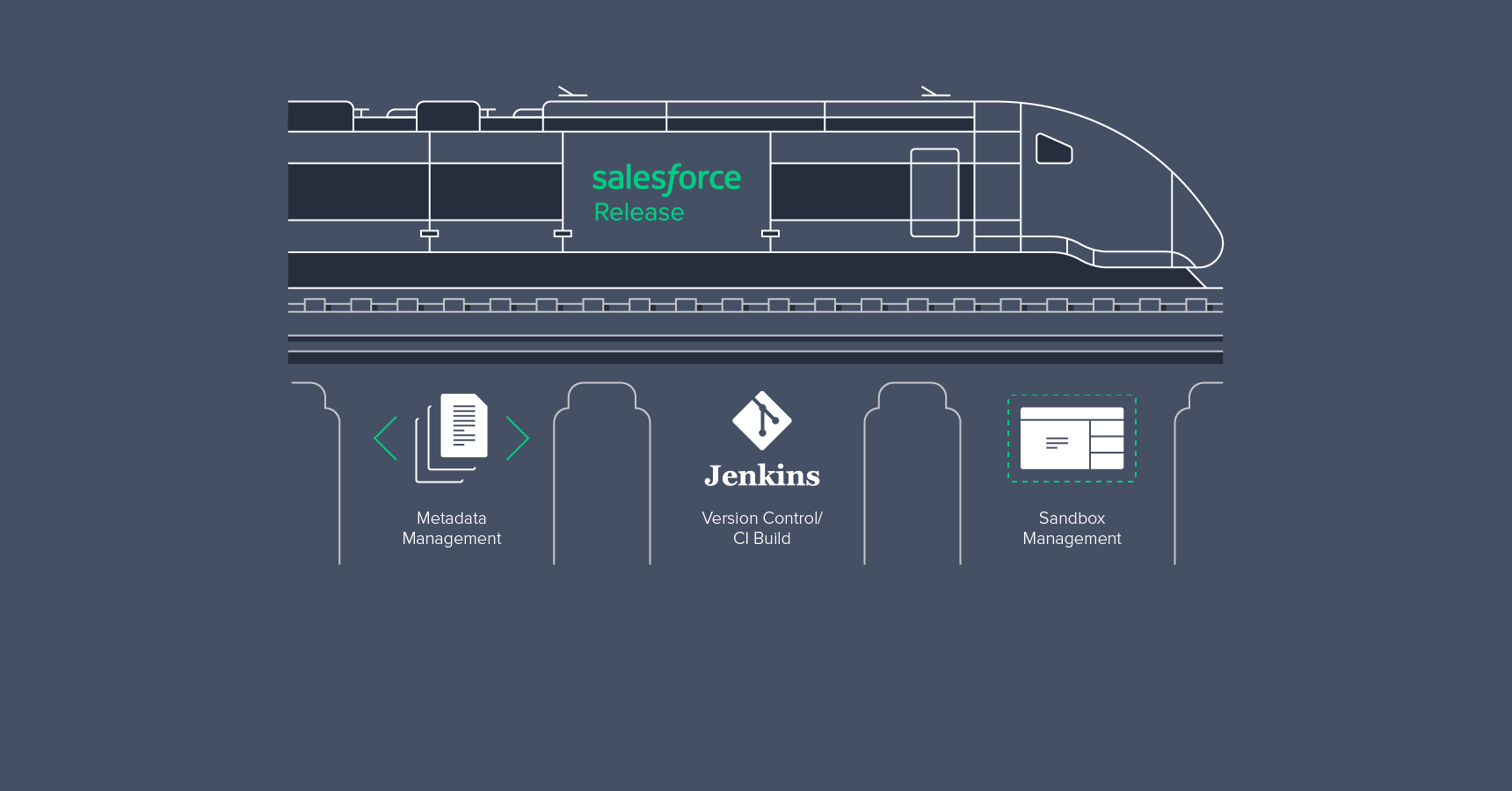 A release train can broadly be divided into three segments:

Metadata is data that provides information about other data. Salesforce provides a rich and powerful metadata model via its Metadata API. Your application metadata describes and encompasses a set of methods that provide programmatic access to the source code and configuration of your organization.

The Metadata API is the best way to manage the customizations in Salesforce. It supports create, read, update, and delete methods. You can use Change Sets, the Force.com IDE, and the Ant Migration Tool to migrate metadata from one org to another, since they all provide migrations via the API.

Each tool has its own advantages, and there are several things to consider when picking one:

The Metadata API is great at serving its purpose when developing and migrating changes on the Force.com platform. But there is a slight catch - not all of the Salesforce metadata is supported by the Metadata API. The official documentation provides a list of unsupported components.

If your organization is making changes that are not supported by the Metadata API, you have to make sure to replicate those changes manually in the destination org. The best way track these changes is a spreadsheet. If you have to resort to this approach, it’s always advisable for a single person to make these changes and track them.

This would be a good general list of columns that one could use for tracking these changes in a spreadsheet:

Migrating changes to production should be a smooth process, since it’s just a repeat of applying changes in the testing and staging environment. Still, there is always a chance of things going south, and then you need a fallback plan. It’s very important to keep backup of your org’s metadata, and that’s what version control and the CI build are for.

Version control is an absolute must for any organization. It allows developers to work in a collaborative, efficient, and safe way. Managing multi-developer, multi-sandbox code development and migration is a challenge in Salesforce. Salesforce also has its own schedule for releases and maintenance. These updates deliver new features, but they could introduce a change in the Metadata API which may break your CI build. So, apart from situations where developers are overwriting each other’s changes, version control helps you in building a rollback strategy. Having a rollback strategy is a must when your application runs on Force.com.

The following flow diagram depicts a practical structure for Version Control and CI. We’ll try to give you a quick description on what the diagram represents. 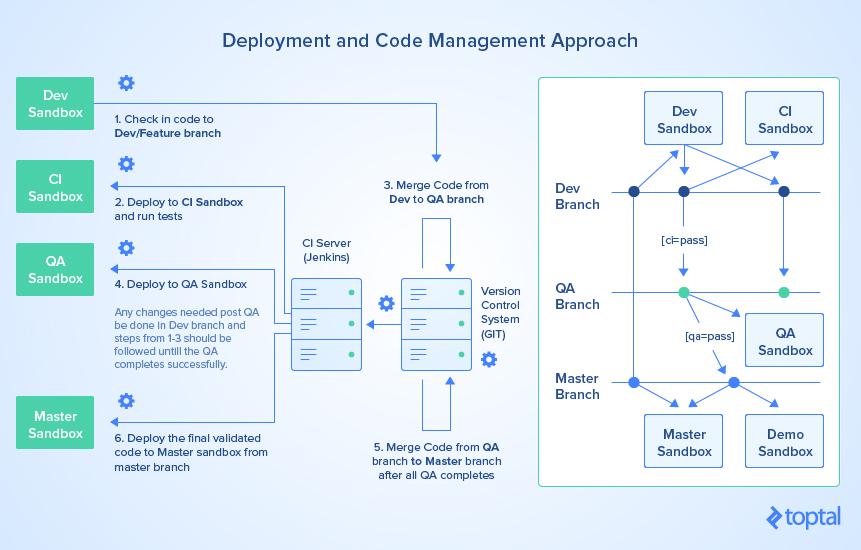 One can choose to add more branches depending on the organization’s needs. But the above structure just works fine for the medium to enterprise level development structures.

To get most out of the DevOps process of your organization, it’s very important to set up the sandbox structure. Before we dive much deeper into it, let’s discuss the different types of sandboxes Salesforce offers us.

A sandbox is an almost exact copy of one’s production metadata. Sandboxes are typically used for development, testing, staging, and training purposes. There are four types of sandboxes, and one should give a due consideration while choosing a sandbox. Full Copy sandboxes could cost a lot of money!

Below is the table for the limits enforced by Salesforce for different sandboxes.

We can see that price isn’t the only difference between sandboxes.

The developer sandbox has a one-day refresh period, which makes it suitable for development, but can only accommodate 200 MB of data, and no production data. As a polar opposite, full copy sandboxes have an exact copy of the production data; even the record IDs are the same. That could make it great for testing and staging, but the refresh period of 29 days makes it difficult to get the latest production metadata and data in the full copy sandbox.

The table below acts as a rule of thumb for selecting sandboxes:

Table 3: Use Cases for Sandbox Selection

Below is the typical org structure which is adopted for medium-sized projects. For enterprise level clients, the org structure becomes more complex but broadly follows the model below. 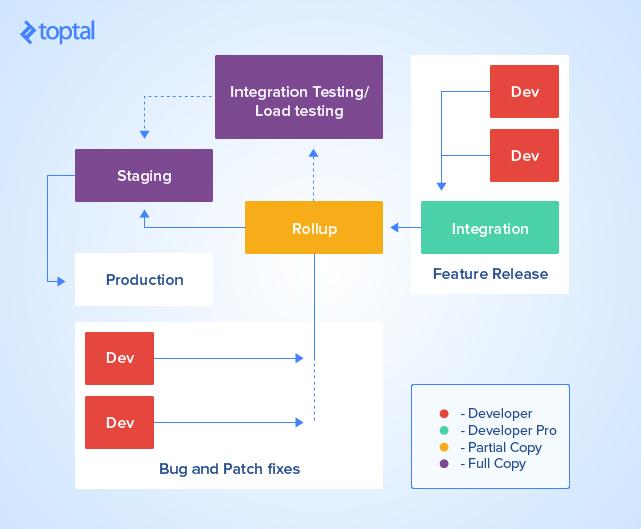 If your organization has any integrations with the third-party system that needs integration testing and load testing to be performed, one needs to have a stable set of data that doesn’t change from release to release. So, it’s better to have a full copy or partial copy sandbox for it.

This process helps us make sure that the changes go through multiple rounds of testing and pairs of eyes. It comes with a heavy downside of requiring a lot of time to develop, test, and deploy changes.

Very often, there is an urgent need to perform bug fixes or patches. To handle these quickly, one should keep a developer sandbox, which would push small patches directly to the rollup sandbox.

As mentioned previously, a sandbox is an almost exact replica of production metadata, but not completely. There is an official list of components/features which are disabled in a sandbox.

Another thing to consider while refreshing a sandbox is that it only copies the production metadata and data. There is no way to copy the metadata from one sandbox to another, or even to create an empty sandbox without any metadata configurations (like free developer orgs). This sometimes becomes a challenge in real life situations. Salesforce has plans to address this issue, and this feature may soon become generally available.

Additionally, if you have some sensitive data in production, which you feel that your development or testing team should not have access to, you can create sandbox templates for fully and partially copied sandboxes.

What to Consider When You Deploy

We have covered the industry practices of application lifecycle management in the Salesforce ecosystem. Metadata and sandbox management play a very important role in creating the deployment packages and payloads. For large and complex Salesforce applications, version control helps in making sure that the metadata changes are tracked while also helping in the creation of a rollback strategy.

We’ll leave you with some extra points that would be good to keep in mind during your next deployment:

Hopefully, this overview will help you during your next Salesforce release.

Ajinkya is a lead Salesforce developer/architect and has worked on Salesforce Sales, Service, Community, and App Cloud. He is extremely knowledgeable about advanced Apex programming, enterprise design patterns, rest integrations, visualforce and lightning development. He has managed many complex projects and led and facilitated onsite and offsite teams.

John Bowen
Ajinkya, great article. BTW, did you get around to the CI using Jenkins example?
Flor Montanari
Thank you Ajinkya
Ajinkya Deshmukh
It was my pleasure!
Ajinkya Deshmukh
Hi Flor, Let me see if I can take couple screenshots or video for you. I'll update you in a while on that.
Ajinkya Deshmukh
Thanks! Yes, we all know the pain :)
Ajinkya Deshmukh
You are welcome Venessa!
Vanessa Wright
Thanks for sharing Ajinkya!
Andrew Schwartz
It was a great read. Every salesforce developer knows the pain of managing the metadata.
Flor Montanari
Would be great to see an example of CI using Jenkins
JanBask Training
Thanks for sharing a knowledgeable article with us.
comments powered by Disqus