Andrej Gajdos
With a Master's degree in Service Science, Management, and Engineering, Andrej works on projects of all sizes for clients around the world.
SHARE

Sharing related information among isolated systems has become increasingly important to organizations, as it allows them to improve the quality and availability of data. There are many situations where it is useful to have a data set that is available and consistent in more than one directory server. That’s why knowing the common methods for performing SQL Server data synchronization is important.

Data availability and consistency can be achieved by data replication and data synchronization processes. Data replication is the process of creating one or more redundant copies of a database for the purpose of fault tolerance or accessibility improvement. Data synchronization is the process of establishing data consistency between two or more databases, and the subsequent continuous updates to maintain said consistency. 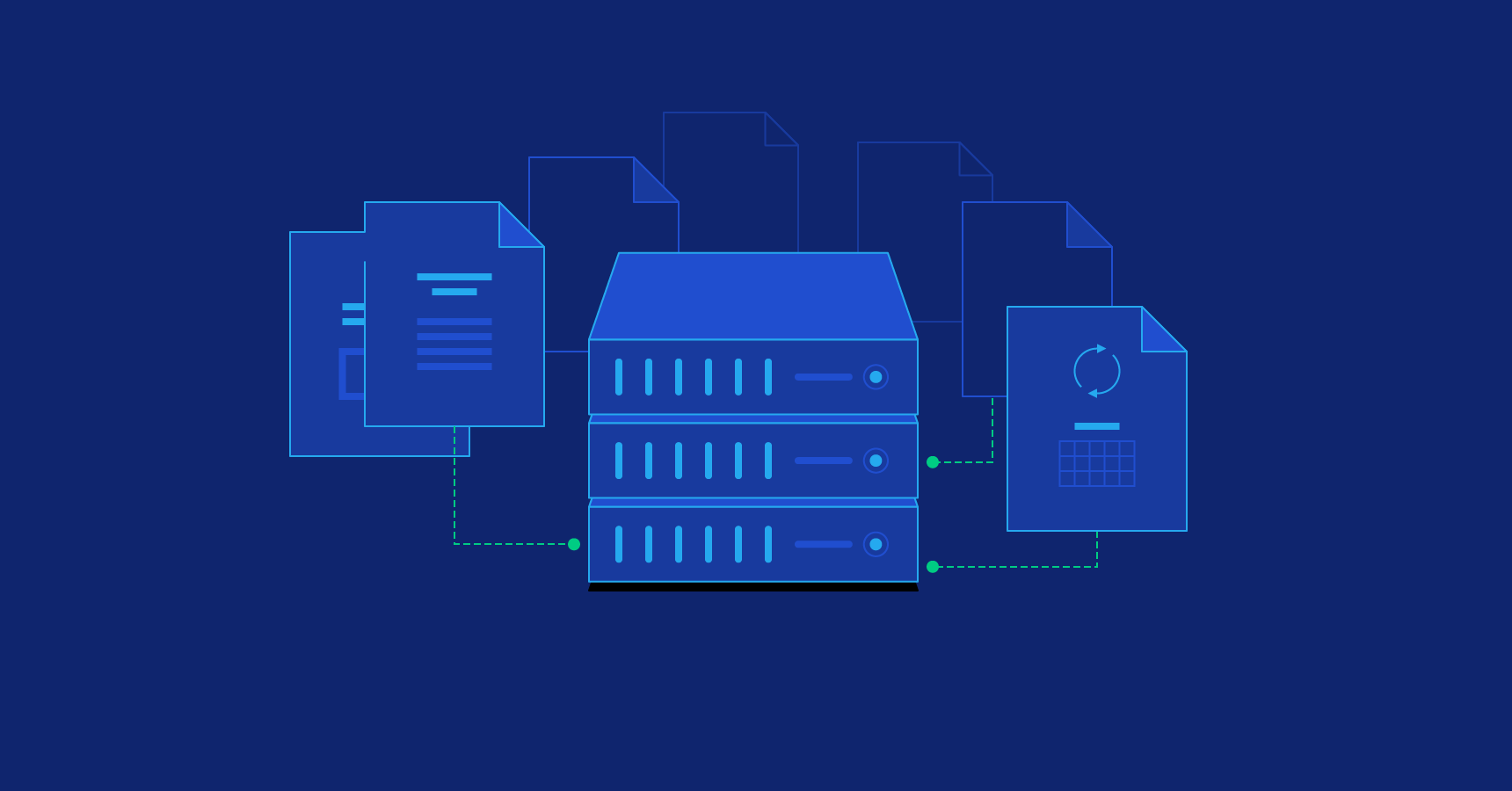 Based on the structure of the source and destination (e.g., databases, tables) we can differentiate use cases when structures are similar or different.

Source and Destination Have Different Structures

If the structures are different, synchronization is more complicated. This is also a more frequently recurring task. A common case is importing from one database into another. The most common case is when a piece of software needs to import data from another piece of software which is maintained by another company. Usually, imports need to run automatically on a scheduled basis.

The method used depends on personal preferences and complexity of the problem you need to solve.

Regardless of how similar the structures are, we can choose four different ways for solving data synchronization:

Source and Destination Have the Same or Very Similar Structures

The most straightforward and tedious solution is to manually write SQL scripts for synchronization.

We’ll do synchronization between the table Source, with columns ID and Value, and the table Target, with the same columns.

If tables have the same primary key, and the target table doesn’t have an auto-incrementing (identity) primary key, you can execute the following synchronization script.

In this method, we can use a tool to compare between source and target data. The comparison process generates SQL scripts that apply the differences from the source database into the target database.

There are a number of programs for data comparison and synchronization. These programs mostly use the same approach. The user selects the source and the target database, but other alternatives could be a DB backup, a folder with SQL scripts, or even a connection to a source control system.

Below are the most popular tools that use the data compare approach:

In the first step, the data is read, or just checksums of larger data from the source and from the target are read. Then the comparison process is executed.

We need to set up the following configuration options that are necessary for data synchronization:

By default, the primary key or a UNIQUE constraint is used. If there is no primary key, you can choose a combination of columns. The Sync key is used to pair rows of the source with rows of the target.

By default, tables are paired by name. You can change this, and pair them according to your own needs. In the dbForge Data Compare software, you can choose SQL query to be the source or destination.

After confirming, the tool compares source and target data. The whole process consists of downloading all of the source and target data and comparing them based on specified criteria. By default, values from equally named tables and columns are compared. All tools support mapping column and table names. Also, there is the possibility to exclude IDENTITY (autoincrement) columns or to do some transformations before comparing values (round float types, ignore character case, treat NULL as an empty string, etc.) Data download is optimized. If the data volume is large, only checksums are downloaded. This optimization is helpful in most cases, but time requirements for performing operations increase with the volume of data.

In the next step, there is a SQL script with generated migrations. This script can be saved or run directly. To be safe, we can even make a database backup before running this script. ApexSQL Data Diff tool can create an executable program which runs the script on a selected database. This script contains data which needs to be changed, not the logic how to change it. This means that the script cannot be run automatically to provide a recurring import. That is the biggest disadvantage of this approach.

Below you can see the typical UI of these tools. 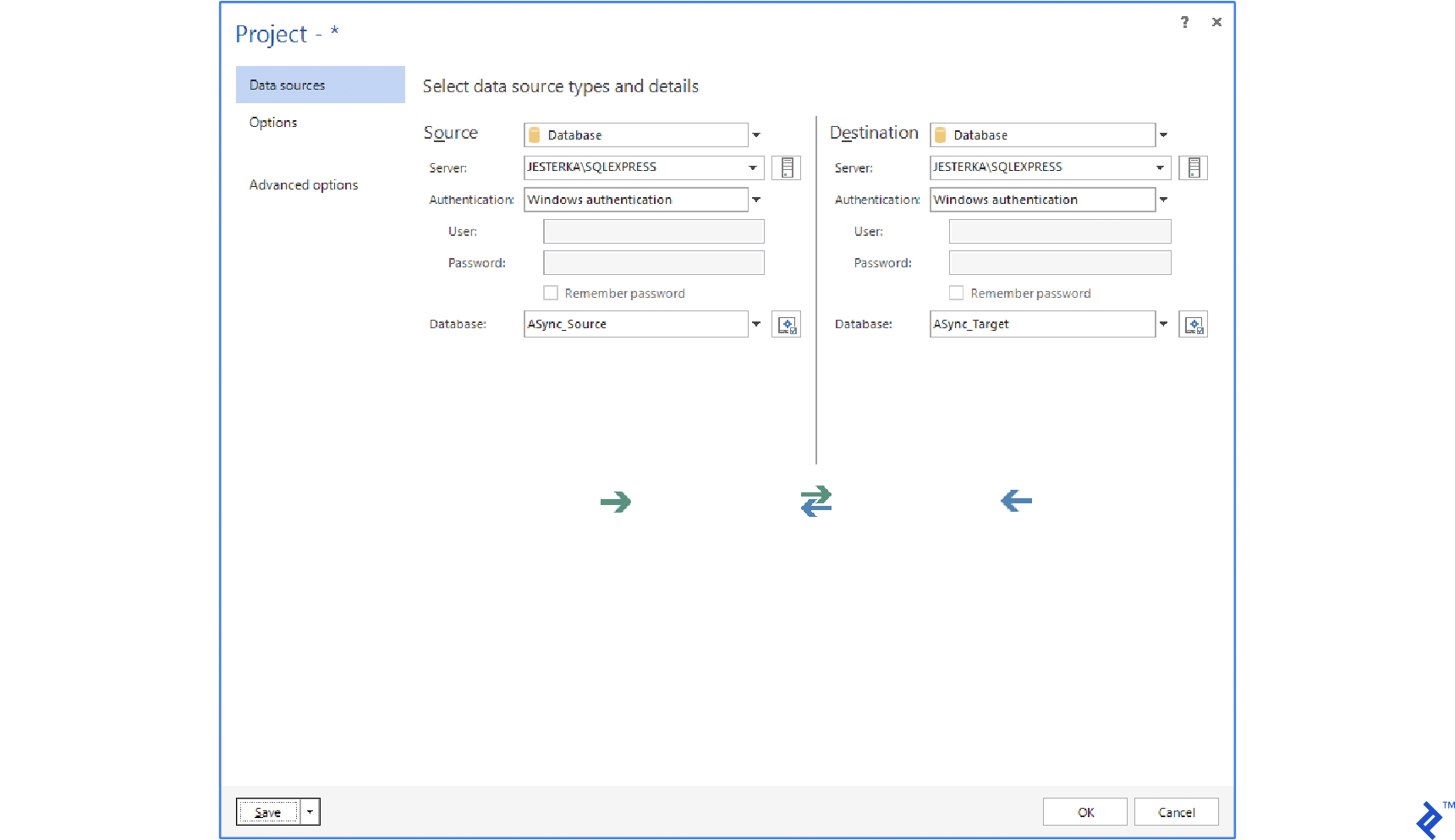 Synchronization by automatically generated SQL is only provided by SQL Database Studio.

SQL Database Studio provides a similar interface to the data compare method. We need to select the source and target (databases or tables). Then we need to set up options (sync keys, pairing and mapping). There is a graphical query builder feature for setting up all parameters. 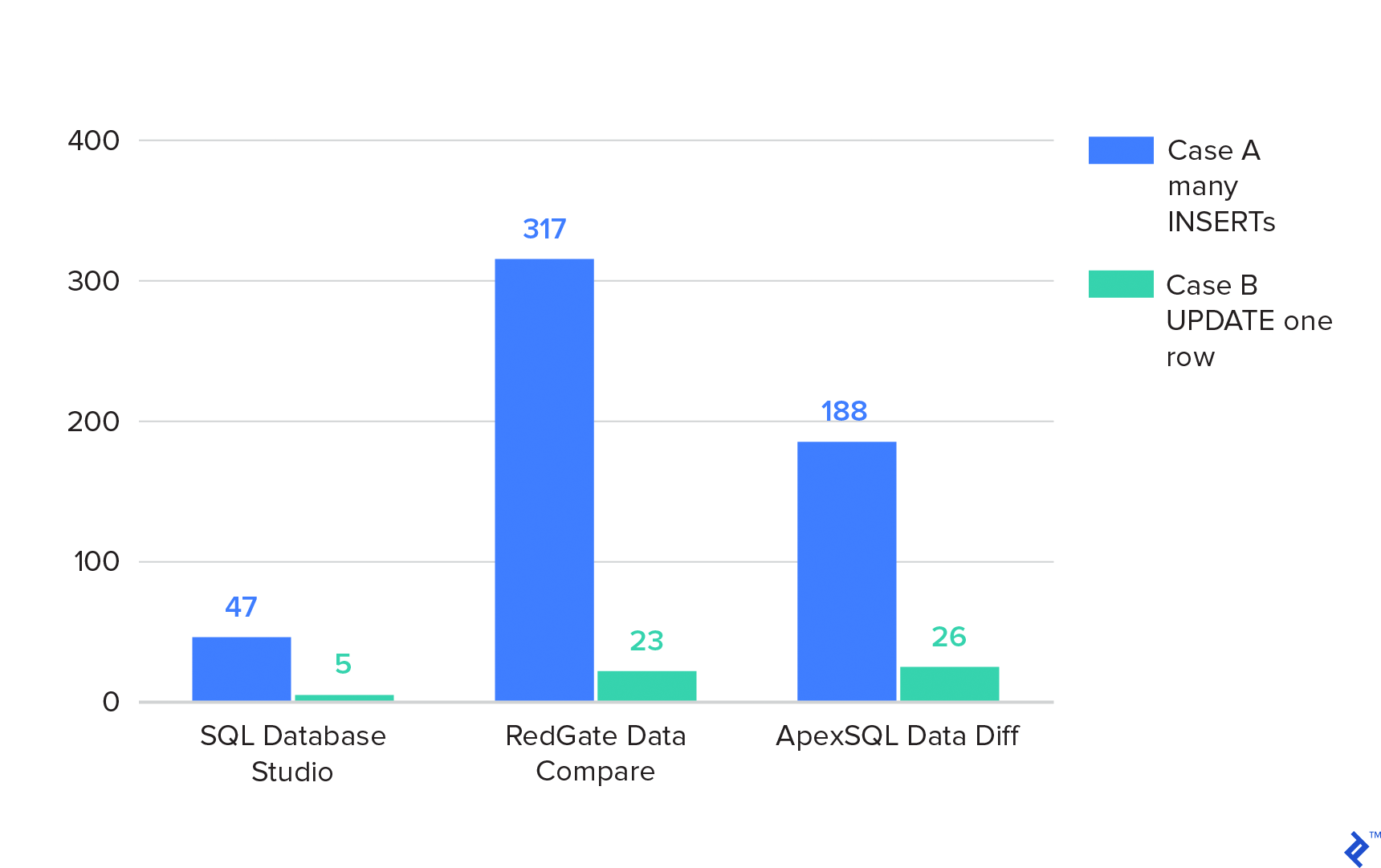 The same test, but databases are on different SQL servers, which are not connected over a linked server. 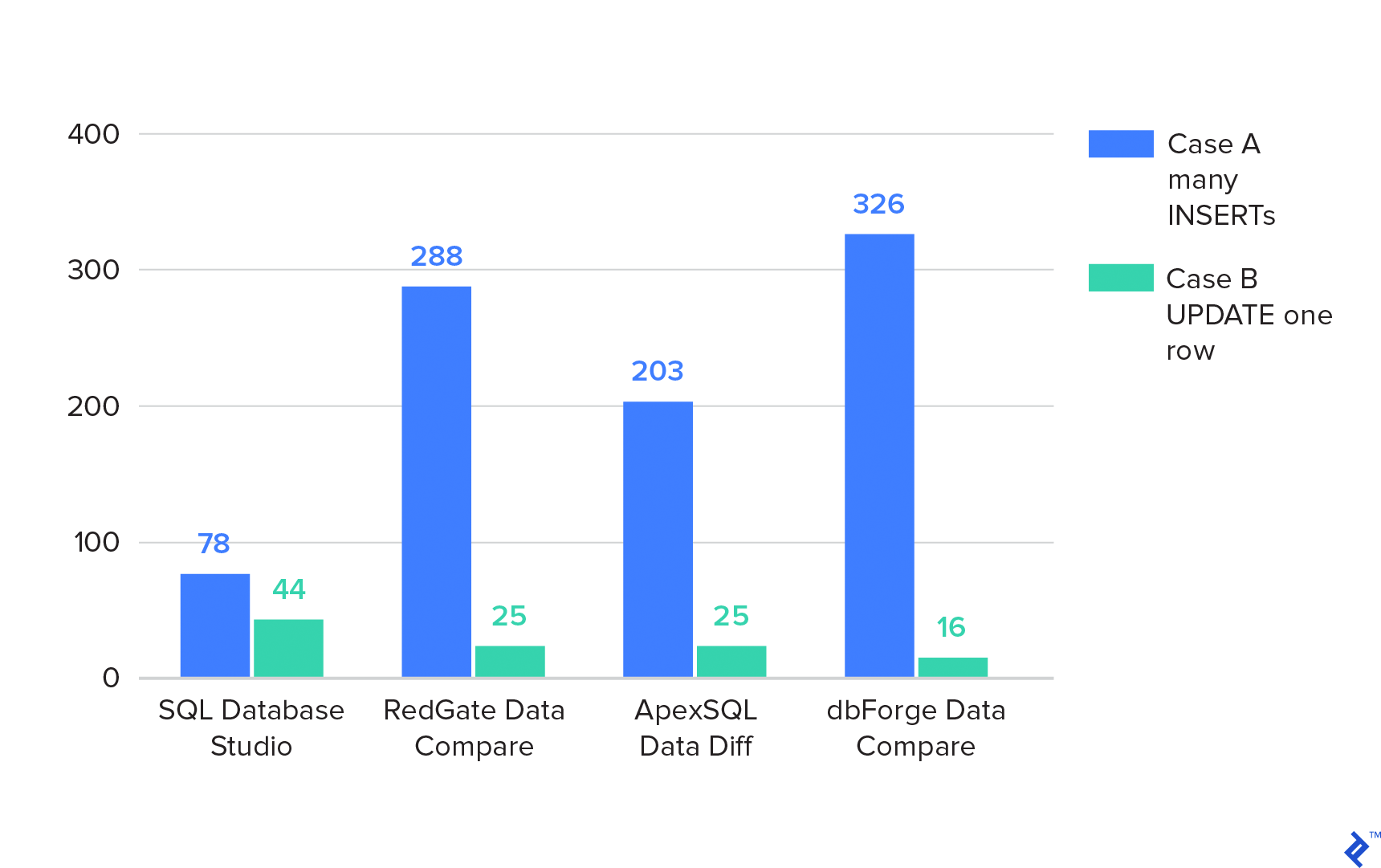 Source and destination have a different structure

There are also situations when one wide table has to be synchronized into many small related tables.

This example consists of one wide table SourceData which needs to be synchronized into small tables Continent, Country, and City. The scheme is given below.

Data in SourceData could be like the one in the image below.

This script is more complicated. It is because records in the tables Country and Continent have to be found. This script inserts missing records into City and fills ContryId correctly.

The UPDATE and DELETE scripts could also be written the same way if needed.

This kind of synchronization (wide table into many related tables) cannot be done with the data compare method, because it is focused on different use cases. Since the data compare method produces a SQL script with data to be inserted, it has no straightforward ability to look up references in related tables. For that reason, applications using this method can’t be used (dbForge Data Compare for SQL Server, RedGate SQL Data Compare, Apex SQL Data Diff).

Editor looks like the well-known Query builder and works in a very similar way. Each table needs to have a defined synchronization key, but there are also defined relations between tables. In the picture above there is mapping for synchronization as well. In the column list (lower part of image) there are the columns of the table City (for other tables it is similar).

After the synchronization, this is what the tables look like:

In the example above, there was one wide table as a source. There is also a common scenario when source data is stored in several related tables. Relations in SQL Database Studio are not defined using foreign keys, but column names. This way it is also possible to import from CSV or Excel files (the file is loaded into a temporary table, and synchronization is run from that table). It’s good practice to have unique column names. If this is not possible, you can define aliases to those columns.

Data synchronization consists of a sequence of INSERT, UPDATE, or DELETE commands. There are multiple ways to create sequences of these commands. In this article, we looked at three options for creating synchronization SQL scripts. The first option is to create everything manually. It is feasible (but takes too much time), it requires complex understanding of SQL, and it’s difficult to create and maintain. The second option is to use commercial tools. We looked at the following tools:

The first three tools work very similarly. They compare data, let the user analyze differences, and can synchronize selected differences (even automatically or from command line). They are beneficial for these usage scenarios:

Each tool is loved for one reason or the other: dbForge has great UI and a lot of options, ApexSQL performs better than the rest, and RedGate is the most popular one.

Which tools are available for database synchronization?

You can use tools such as RedGate Data Compare, ApexSQL Data Diff, and dbForge Data Compare, which use the data compare method. You can use SQL Database Studio, which automatically generates reusable SQL scripts.

How to compare database data?

Comparison based on data can be done automatically using third-party tools, which come at a price. Alternatively, you can write comparative SQL scripts that show you differences, but that is much more time consuming and less reusable.

How to synchronize databases in SQL Server?

Andrej is a technology consultant and software engineer with over six years of experience delivering software. He has worked for clients all around the world in many different industries. He has delivered solutions for startups, digital agencies, and big companies, such as Apple. A background in computer science and his ability as a full-stack developer allow him to create everything from small business websites to custom web applications.

Jon Hickam
Great overview, thanks! IMHO I would start any data synchronization project by answering a few basic questions. 1) For each given data element, what is the system of record? In other words what is the source (or worse-case scenario sources) of that element in the data ecosystem? 2) For each given data element, is it only going to be new values created (INSERT)? Are changes (UPDATE) and/or removals (DELETE) expected? The strategy for insert-only data scenarios is much more simple then one where there are deletes. 3) How 'fresh' does the data need to be in the replicated environments? real-time? within a few minutes? nightly? 4) What are the unique identifiers for each key data element? Hopefully you can find a good natural key. Often times answering those questions is harder then actually implementing the data synchronization! But once that foundation in place then it is possible to make a well-informed decision about what the optimal technical solution is for a given client.
comments powered by Disqus