Ondřej Dostál
For the past five years, Ondřej has worked as a designer, specializing in helping companies with their UX and UI designs, mostly mobile.
SHARE
Read the Spanish

When designing a product, there are many ways to improve the user experience, including defining personas, well-structured information architecture, and thoughtfully written content. But after this high-level structure is set, creating delight for a user comes in the smaller interaction design details.

These details, known as microinteractions, are individual moments in the product designed to accomplish a single task while enhancing the natural product flow. Swiping up to refresh data, liking content, or changing a setting are all microinteractions. They can also include simple UI animations—for example, the way a menu slides in when tapped, or a card glides off the screen when swiped.

Often microinteractions aren’t even consciously noticed by the user, but their subtle details make the product more enjoyable and easier to use, and therefore improve its user experience.

Microinteractions and UI animation are so crucial they can make or break a design—or as Charles Eames, of furniture design and architecture fame, said:

The details are not the details. They make the design.

Some key benefits of incorporating microinteractions into a product are:

Now that we’ve established some definition and context around what microinteractions do, and given an example of how they improve the user experience, let’s discuss the best practices for creating microinteractions.

Identify and Understand the User’s Problem

The first rule in any user experience design is to uncover and understand user problems—it’s no different for microinteractions. The best way to understand what the user needs is to conduct surveys or interviews, or observe behavior through user research. Toptal designer Ivan Annikov goes into more depth about understanding user needs in his article, “Going Guerrilla: Affordable UX Research Tips And Alternatives.”

The goal is to bridge the gap between the user and a product in ways that feel intuitive and natural, so avoid strange animations that take too long to load or may distract the user. Instead, create designs that seamlessly flow with the product. Subtlety is key in microinteractions. Don’t leave the user puzzled and thinking, “What was that?”

Even experienced designers rarely get designs completely right on the first try. That’s why using a process of user testing and iterative design is a simple way to reduce usability flaws before the product launch.

During the user testing phase, microinteractions are tested and analyzed for usability and revised during the next design phase. This process is repeated until usability issues and pain points are corrected.

According to Dan Saffer, a Sr. Staff Product Designer at Twitter and the author of “Microinteractions: Designing with Details,” there are four parts of a microinteraction.

This microinteraction takes the first line of a document and suggests that piece of text as the name for the document, making the name creation process more intuitive.

The process of designing a microinteraction is the same as for any design task: identifying the user pain point and fixing it. While keeping the previous best practices in mind, let’s start to identify the problem.

An easy and intuitive way to keep documents organized is to simply name them descriptively. In most text editors, the “Name your document” field remains blank, even though there is a strong chance the file name will eventually correlate with the document’s content. This is a process worth addressing with a microinteraction.

Google Docs handles this in two ways, depending on the user’s choices: 1) Users can click into the name field and change the document name right away before typing any content, and change “Untitled document” to the name of their choice, or 2) Once a user types the first line of text, Google autopopulates that as the document name. The user can keep this as is, or change it.

There could be a few possible triggers to name the document, using the File > Save as menu function, or hitting cmd+s on a Mac (ctrl+s on Windows) on the keyboard as in desktop applications. But none of these take advantage of the interactive nature of the web, and they don’t particularly enhance the user flow.

Instead, Google Docs’ main trigger is to simply click the document name field. The hover state on the field displays a “Rename” tooltip. The secondary trigger is File > Rename, which highlights the name input field.

Rules define what happens after clicking the trigger. In this case, the first line of text will appear as the document name. But what if the user doesn’t want to have the first line of text as the name? When the user clicks the name input field, all of the text is selected and will be deleted with any keystroke, making it easy for the user to create a new name.

Google Docs highlights the document name, which will allow the user to instantly start creating a new one.

Changing the color of the input field border is a common interaction pattern, and it’s what Google Docs uses here to give the user immediate feedback.

Changing the border color lets the user know what they're changing.

The user successfully created the document name and the trigger remains in place with one key difference: The document has now been named.

At this point, the user may only want to only change a few letters or add a date to the name, rather than changing the whole name they previously defined. In this case, in contrast to the previous rule, the rule to highlight the entire document name is disabled.

Google Docs doesn't highlight the name after it has been set.

After defining the problem and focusing on all four parts of a microinteraction, the result is a more natural, user-friendly experience. The Google Docs file naming solution helps the user stay organized with properly named files and simplifies the process of naming documents.

Apple iOS Reminders help users stay organized and eliminate several steps by allowing them to tap, hold, and drag a list item to change its place in the list order.

Changing list item order is as simple as drag and drop.

“Liking” content by clicking a thumbs up button or icon has become a common UX design pattern in many apps and websites. Facebook built on this interaction by adding multiple options beyond “liking” through a subtle microinteraction.

In most browsers, it’s possible to override the default text selection color. IKEA uses this interaction pattern to add a subtle branding detail by highlighting text in its iconic yellow and blue colors.

IKEA highlights text in its yellow and blue brand colors.

Google Hangouts assumes that one of the times a user may want to share their location is when someone texts “Where are you?”

When the user views this message, a “Share your location” button shows up as a contextual option. They can then tap that button to auto-send a map of their location to the other user. 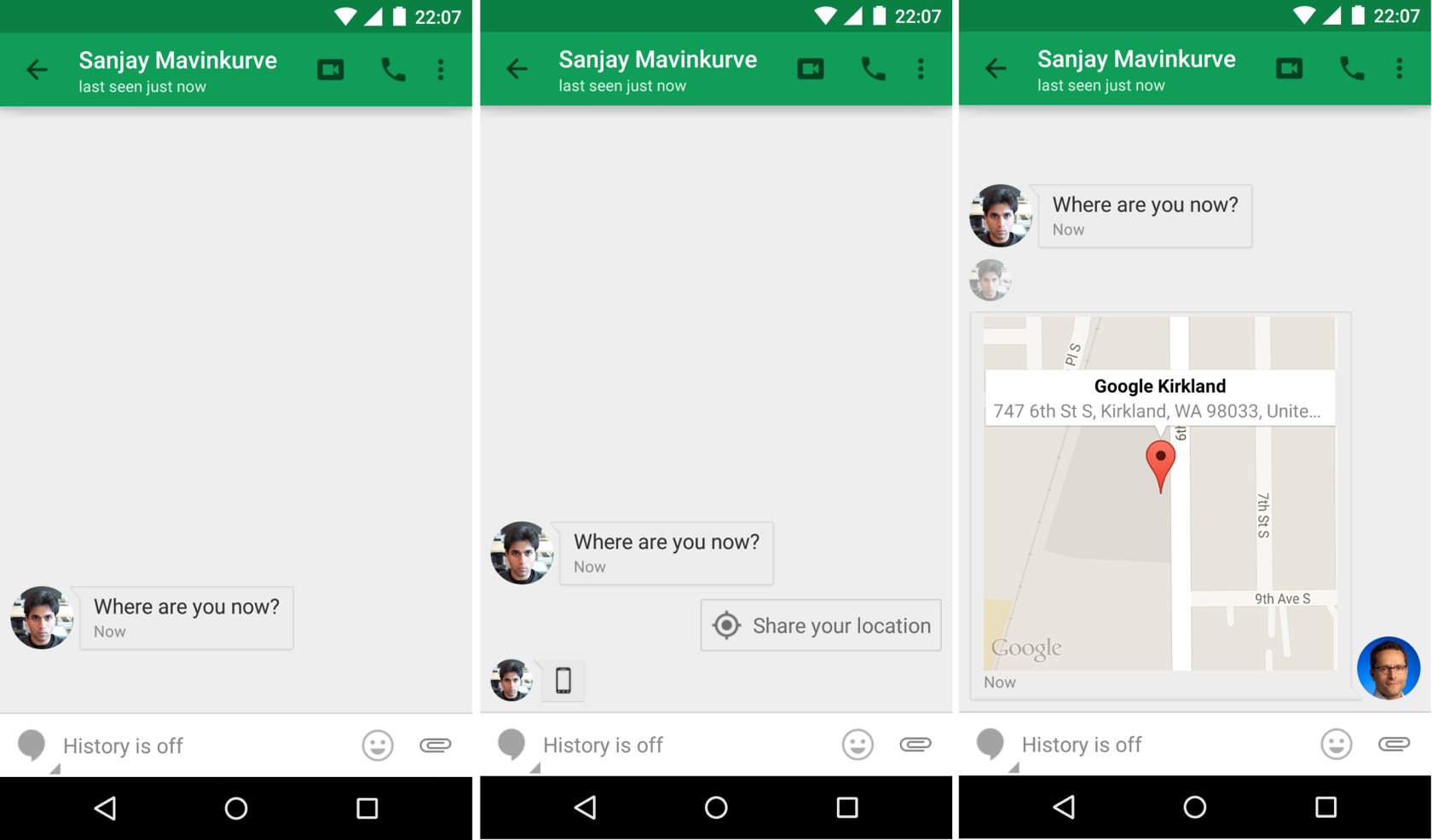 Sharing your location with only one tap (from TechCrunch).

Microinteractions can be used to answer simple yes or no questions in an app. Tinder does this by having the user swipe left or right (no/yes) depending on whether they like or don’t like their possible match.

A UI microinteraction in motion: Swipe left for no, right for yes on Tinder.

The Google Inbox app not only intelligently groups mail with bundles, it’s also designed to allow search by voice, or choose from the most recent contacts with a single tap.

The Google's Inbox app lets users search for emails from their most recent contacts with a thoughtful microinteraction.

SeatGeek simplifies the form-filling process by automatically filling in the information from a user’s contacts with a tap of an “Add from Contacts” button.

When a user's friend is already in their contacts, they can add them easily to an app with a simple tap.

Microinteractions are a key part of improving the user experience, and there are many resources available to learn more about them, a few of which are listed below.

For the past five years, Ondřej has been working as a designer and starting three years ago, he began specializing in helping companies with their UX and UI designs, mostly mobile. At heart, Ondřej is a perfectionist and minimalist with a passion for food, exercise, music, and of course, design.

Ondřej Dostál
I'm glad you liked the article!
Oliver D
Very good article. Thank you for taking the time to providing proper context and samples.
黄彩云
Hello,I learned a lot from your article about the Microinteractions .The article is very good. Can I translate your article into Chinese and share it with my friends? I will attach the original author and the original link.
comments powered by Disqus