Wojciech Dobry
Wojciech is a product designer and web designer with eight years of experience. He’s passionate about typography and sound design.
SHARE
Read the Spanish

What Are Buttons and Do We Really Need Them?

Since the dawn of graphical user interfaces, we’ve been using buttons. Consider that Xerox PARC’s original GUI is 44 years old, yet our user interfaces still look remarkably like it. I recently traced the history of button styles by creating the Dribbble Timeline. Though buttons evolved in sync with current trends and alongside technology, their origin is undoubtedly inspired by real objects of the past.

For more than a decade, we have been creating devices without a physical interface—that don’t depend on human touch but can be activated by voice or gesture. Why do we persist in creating shapes with which to interact that are based on the familiar objects that surround us? The shape of a digital button is still modeled on tools and mechanisms we developed in the 19th century!

We have created completely new, smart electronic devices—we can handle them in almost any way we choose, but out of laziness or force of habit, we continue to force our users to click on a tricky little area just a few pixels wide.

“Button-less” UI – Where Everything Interacts

A “button-less utopia,” is a concept where any attempt to hold on to over 130 years of the way things have always been done is completely shattered. The future is now—we must move on and divest ourselves of our predecessors’ outmoded solutions.

Is it possible for us to imagine an interface completely free of buttons? Something so intuitive, that just by looking at it, you will know how to act? It no longer needs to be only in our imaginations—these interfaces already exist.

Can we, once and for all, eliminate the venerated button? Microphones, cameras, touch screens, vibration, accelerometers, gyros, GPS, extended reality, virtual reality—the list goes on—and all this handled from your smartphone or PC. There is no longer any reason to continue forcing your users to press that one tiny rectangle.

Have you read Type Design where interfaces are devoid of any graphic element, and where the only thing that matters is content? Many of you asked: “What about buttons?” We don’t need them any longer—let’s eliminate them completely.

Here are a couple of interesting ideas:

Facebook just asked, “What’s your mood?” No need to press a button to answer—use your voice—just tell it you feel great and head for the beach. Then drag the text that Facebook recognizes from your response to where you want it to appear.

Like an article on Medium? A while back on Medium, you could simply “recommend” an article. Today we click “claps.” So “clap.” What if there was no need to click this odd little button, just literally clap?

What about some more complex actions? Such as a checkout in an online store. Drag-and-drop an item into the shopping cart, swipe to proceed to checkout, then confirm it with your fingerprint. Easy peasy.

Let’s start with the surfaces we currently touch to perform an action. Given that the vast majority of modern day graphical user interfaces are touch screen displays—often handled with our thumbs—it stands to reason that such interfaces will be with us for a long time. And we will definitely have that irresistible urge to tap—touch is our most important sensation after all. Touching the surface gives us a sense of real action, of control. How would it be, that instead of clicking on a particular point, we taught our users to interact with the entire surface?

Have you ever seen a button that allows you to browse an Instagram Story and return to the previous Story? Probably not, because all you need do is touch the left edge of the screen to make it happen.

Users have come to expect new ways of interacting with our digital products, and it often does not involve a button. Cards are responsive on all of their surfaces; by clicking on any word, we expect to find its definition; by touching pictures, we expect some action. Users are already accustomed to the fact that entire areas respond to touch.

We understand gestures very well because they are natural to us and reflected in our physical actions. Currently, almost every application uses them to speed up navigation; we can double tap a photo instead of pressing it like a button; we can swipe to browse the gallery; or pinch to zoom any content.

We make gestures not only on flat touchscreens—gestures are also performed in AR and VR spaces, where we can navigate with our entire body.

Siri, Cortana, Alexa, and Google Assistant are all up and running. Many argue that voice interfaces are the future—it’s hard to disagree as their potential uses are beyond number. We can control vehicles, smart buildings, and machines simply by talking to them—just like we talk to a real person. With artificial intelligence and machine learning, machines are now able to understand our language more and more accurately. We are no longer confined to pronouncing carefully scripted “magical spells”; we can speak in full sentences.

By using speech, we can move freely in the world of money transfers. Currently, Siri allows you to transfer money via PayPal to another person using only one quick request: “Siri, send $200 to XYZ using PayPal.” No buttons—the only confirmation and security check required is Touch ID. 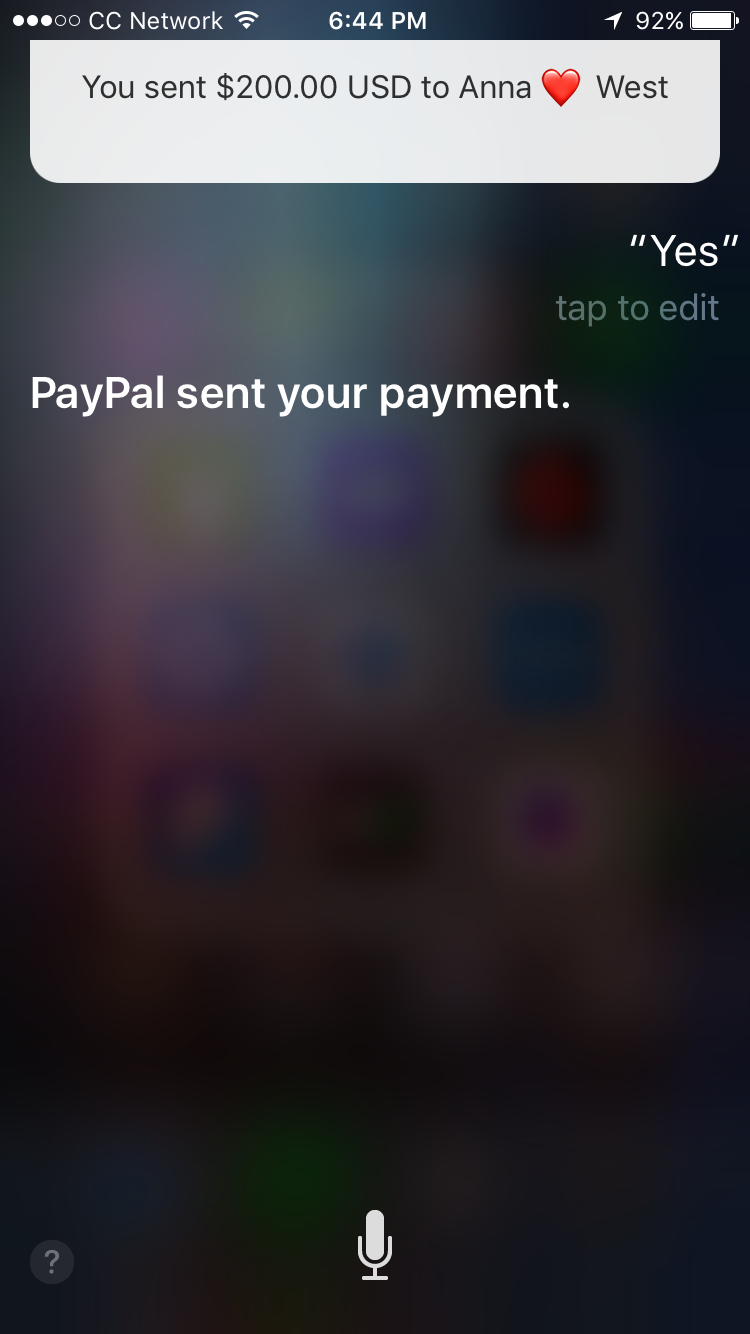 Smile to pay? It’s here! Alibaba and KFC jointly launched a system that allows you to pay by simply smiling at the camera—no buttons to press. The system works on facial recognition and is now available in China.

This is just one of the potential uses. Our devices are already equipped with a whole host of sensors and can monitor your entire body. Nothing is preventing you from using one finger to perform any action on your smartphone.

Another example of a physical action that will hasten the demise of buttons is simply being close to the device. Let’s look at the iWatch, for example—just pair it with your laptop and stand by to unlock your MacBook. Wearable devices can be used to confirm our identity as well as intelligently predict our needs based on location and sensor data. Thanks to them, we can already avoid using buttons on many interfaces.

Let’s not forget about the technologies that have been widely available for several years. One is the gyroscope—available in almost every smartphone but rarely used in interfaces. Above, you can see experimental interfaces created by Patryk Adaś.

With so many different options available to us, it’s now possible to forget about using typical rectangular buttons for users to interact with. With today’s technology, we have the ability to create completely new interfaces that can:

The time has come—technology is overtaking us. We, designers, MUST pursue it… and be sure to catch up!