The 6 Most Recession-Proof Industries

Listen to the audio version of this article

For what seems like an endless Groundhog Day-like existence, we have heard on the news that a recession is imminent. Analysts will point to an obscure chart that shows it’s coming; someone will then retort with a “correlation does not imply causation” kickback. We hear about this so much because it breeds fear; recessions can be catastrophic for businesses and consumers.

Some types of businesses don’t have as much fear about recessions though, because they actually perform resiliently–if not strongly–during them. What are these recession-proof industries, and what characteristics have contributed to this luxury?

What are Recession-Proof Companies?

All companies strive for growth and strong earnings, no matter what conditions their underlying economies are under. Yet some fail, due to being naive about their true customer loyalty, product/service positioning, and/or a failure to comprehend the contagion that can seep in from elsewhere. Three-quarters of companies experience a revenue decline during a recession, yet 14% actually experience revenue and profitability growth.

Institutional investors class recession-proof stocks as “defensive”: businesses that have been proven to be resilient to economic shocks, the caveat being that their performance is not as stratospheric as others during better times. Goldman Sachs’ basket of defensive companies have returned 11% over the past year to September 2019, during which the S&P 500’s return has just been 1.9%.

To be recession-proof though, a business must either be providing something that is a high enough priority that even the most frugal consumer will still buy, or conversely, is one that sees demand rise due to the tough conditions that the economy is under.

The following chart tracks the growth of a variety of sectors during the 2008/09 recession, where it’s clear to see that a number of industries mentioned performed strongly due to their recession-proof characteristics.

Performance of Company Types During the Great Recession (2008-09) 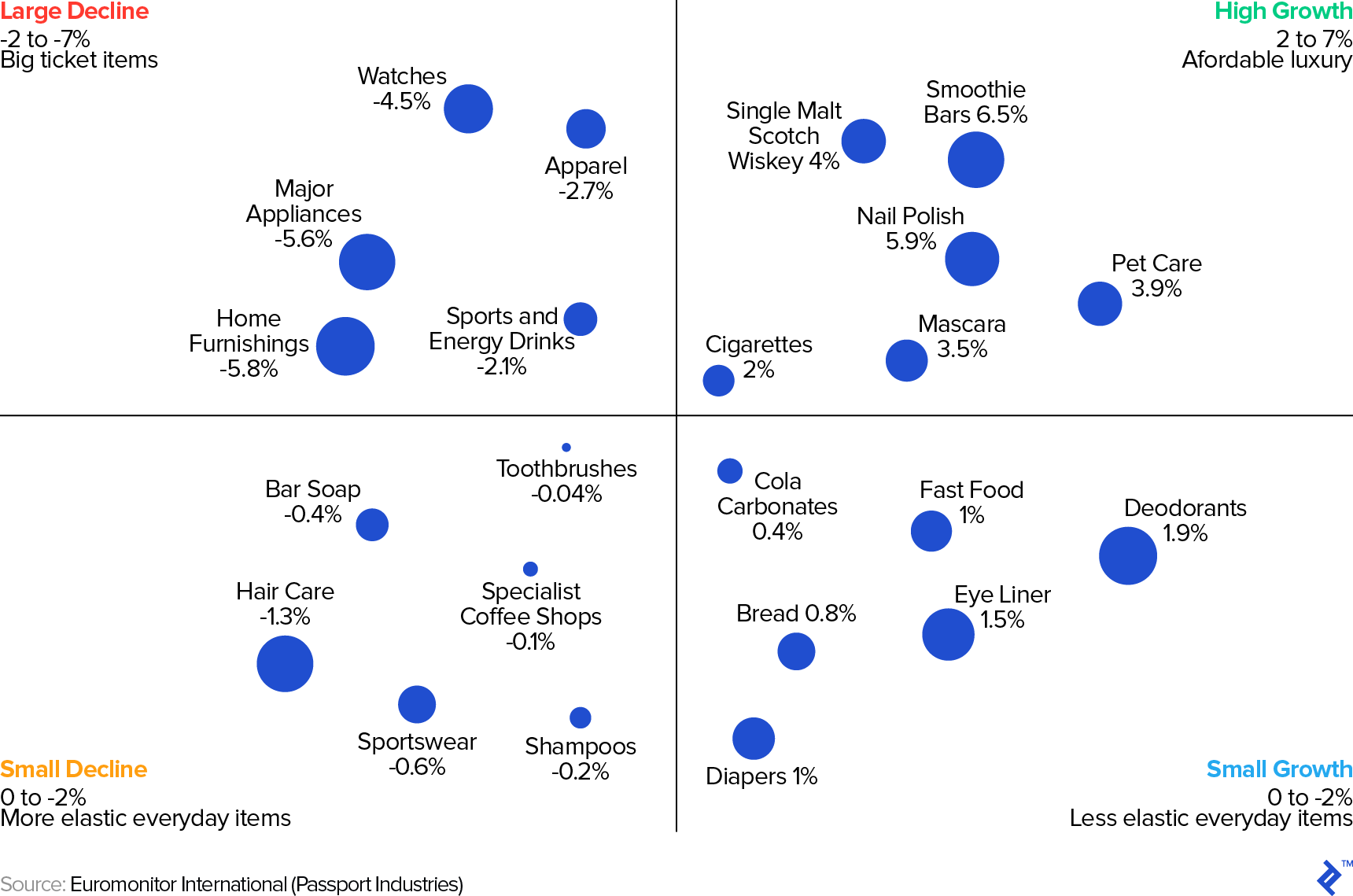 Below are some examples of Industries that have Recession-proof tendencies. Pay specific attention, not to the product/service, but the behavior around it which establishes its “defense.”

The term “staples” is key here, as it’s referring to the basic, everyday items that we need for nutritional sustenance and personal hygiene. So think bread over caviar and soap over fake tan.

An adult man and woman require 2,500 and 2,000 calories respectively, per day, to maintain their weight. This doesn’t change during a recession, and companies that provide the basic staples of a diet will not be massively disrupted by it. Faced with a TAM ceiling of population * calories, over the years, food companies have reduced the nutritional content of their food in order to encourage more snacking, to counteract this ceiling.

When you look at consumer goods conglomerates, say a Proctor & Gamble or Unilever, their portfolio is stacked with household staples and brands that cater to various tiers of budgets. Such a strategy ensures that they have malleability to cope with demand spikes, whereby during a recession their performance may oscillate between consumer preferences, but still maintain overall sales levels.

The same concept applies to companies selling hygiene products for the self, or house, in addition to pet supply businesses.

Luxury goods, despite the high price tag, are surprisingly resilient to recessions. For heritage brands with generations of experience and brand cache, a recession can actually lead to more consumers switching to it due to their tastes becoming more discerning. A large component of the price of a luxury good is the intangible promise of quality, prestige, and long-lasting value. Luxury watches, for example, are promoted as heirlooms to be passed down through generations.

Inflation does not necessarily go in tandem with recessions, but during such times of inflation, luxury goods demand rises as the good holds value and will not depreciate. Argentina is blighted by inflation; you see businesses spend every dollar on quality inventory to build up huge runways as an inflation edge. That’s because they are buying goods that do not lose value.

The best way to describe what bonds this section together within an economic concept would be to group activities that are addictive. Addiction is inelastic, and as such, alcohol, nicotine, and gambling are pastimes that can weather economic storms. You could also class sugar and caffeine into this bracket too. There is also the more abstract point, that said activities can be “escapes”, which during hard times can be a necessary relief for worried consumers. During the 2008 US recession, alcohol sales rose by 9%.

Creating addiction is a taboo subject, yet many businesses seek to create such a euphoria about their offerings with users in the hope of creating inelasticity. Internet businesses have ramped up consumer intelligence and behavior monitoring to very elaborate levels. You could look products like social media, the infinite scroll, and in-app purchases in games, as a means of creating addictive loyalty.

Businesses that focus on healthcare provision are generally stable concerns that will not be affected by recessions. This is due to the simple fact that health is a mortal matter that must be tended to and will take a spending priority over everything else.

Many sub-sections can apply to this sector, resident care being one such example. Going forward, the aging demographics of the wealthy baby-boomer generation hitting retirement offers signs that healthcare spending will stay steady.

Southwest Airlines has been profitable for 45 years in a row. The effect of low-cost air carriers was to completely disrupt the concept of air travel, expanding its market reach to lower-income groups that before could not use air travel; in the 50 years to 2013 the cost of an airfare had reduced 50% in real terms.

Budget travel, which also includes long distance bus transport, staycations, and public transit is a resilient sector. It performs strongly during upturns due to its necessity (those relatives can’t visit themselves) and value, which breeds loyalty and increased frequency from frugal travel-hungry flyers. During downturns, its popularity also rises due to its price benefits.

The operational management of budget airlines is key to their success, as they operate on razor-thin margins and thus, have efficient and streamlined business processes. For example, the Republic of Ireland’s Ryanair has a fleet of 419 airplanes, of which all but one are the Boeing 737-800. By operating with just one plane model it ensures parts, repairs, maintenance crews, and all their necessity procedures are as uncomplicated as possible.

The infrastructure piping commodities into our lives is not the most glamorous of business areas but is one that can weather any kind of storm due to the necessity of its provisions. Gas, water, electricity, and telephony needs do not change during a recession. These industries are also ones that gain a cloak of recession-proof protection from their linkage to government regulation, which can either provide subsidies or limit outside competition.

The Future of Recession-Proof Industries

Defensive stocks have been falling as a percentage of the overall stock market constituents. As recent as the early 1990s they numbered around 40% of the entire S&P 500, this number has fallen to below 16% in 2018.

There are many reasons that can be suggested for this change:

Going forward, it’s likely that the blend of industries mentioned in this article may change. When you look at demographic, travel, dietary, environmental attitudes, and personal health trends over the past decades, it’s feasible to opine that new recession-proof industries will emerge as entrepreneurs capitalize upon their prospects.

What industries are recession-proof?

What industries are hit hardest by recession?

Goods or services with an elastic demand that either have many substitutes are are not seen as necessities suffer most during recessions.

What constitutes a recession?

In most nations, a recession is officially declared when economic growth is negative for two consecutive quarters. In other nations, such as the US, it is declared by a panel judgment.

Alex is a London-based CFA charterholder who has had a global career. He enjoys freelancing to keep abreast of industry trends and to reinforce his experience from venture capital, consulting and bond/currency trading. With a technical skill set and an engaging communicative touch, he is proficient in valuations and market analysis. His breadth of work has ranged from projects with the Bank of England to helping a jewelry entrepreneur fundraise.

How to Approach Financial Data Visualization

Unwrapping the Mysteries of Brand Valuation

Consultant Toolbox: Frameworks for Solving Anything

How to Recreate the Resources of a Bloomberg Terminal for Free