Ahmet Shapiro-Erciyas
Ahmet has more than five years of Java experience. He led the internal AngularJS training at Target and has developed iOS apps with 8k+ downloads.
SHARE

You have started using Angular for all of your favorite projects. You know what Angular has to offer, and how you can leverage it to build amazing web apps. But, there are certain things about Angular, and knowing them can make you better at using Angular for your projects.

Data flow being at the center of almost all things Angular, change detection is something worth knowing about, as it will help you trace bugs much more easily and give you an opportunity to further optimize your apps when working with a complex data set.

In this article, you will learn how Angular detects changes in its data structures and how you can make them immutable to make the most out of Angular’s change detection strategies.

When you change any of your models, Angular detects the changes and immediately updates the views. This is change detection in Angular. The purpose of this mechanism is to make sure the underlying views are always in sync with their corresponding models. This core feature of Angular is what makes the framework tick and is partly the reason why Angular is a neat choice for developing modern web apps.

A model in Angular can change as a result of any of the following scenarios:

Whenever change detection is triggered, Angular walks down this tree of change detectors to determine if any of them have reported changes.

The change detection cycle is always performed once for every detected change and starts from the root change detector and goes all the way down in a sequential fashion. This sequential design choice is nice because it updates the model in a predictable way since we know component data can only come from its parent. 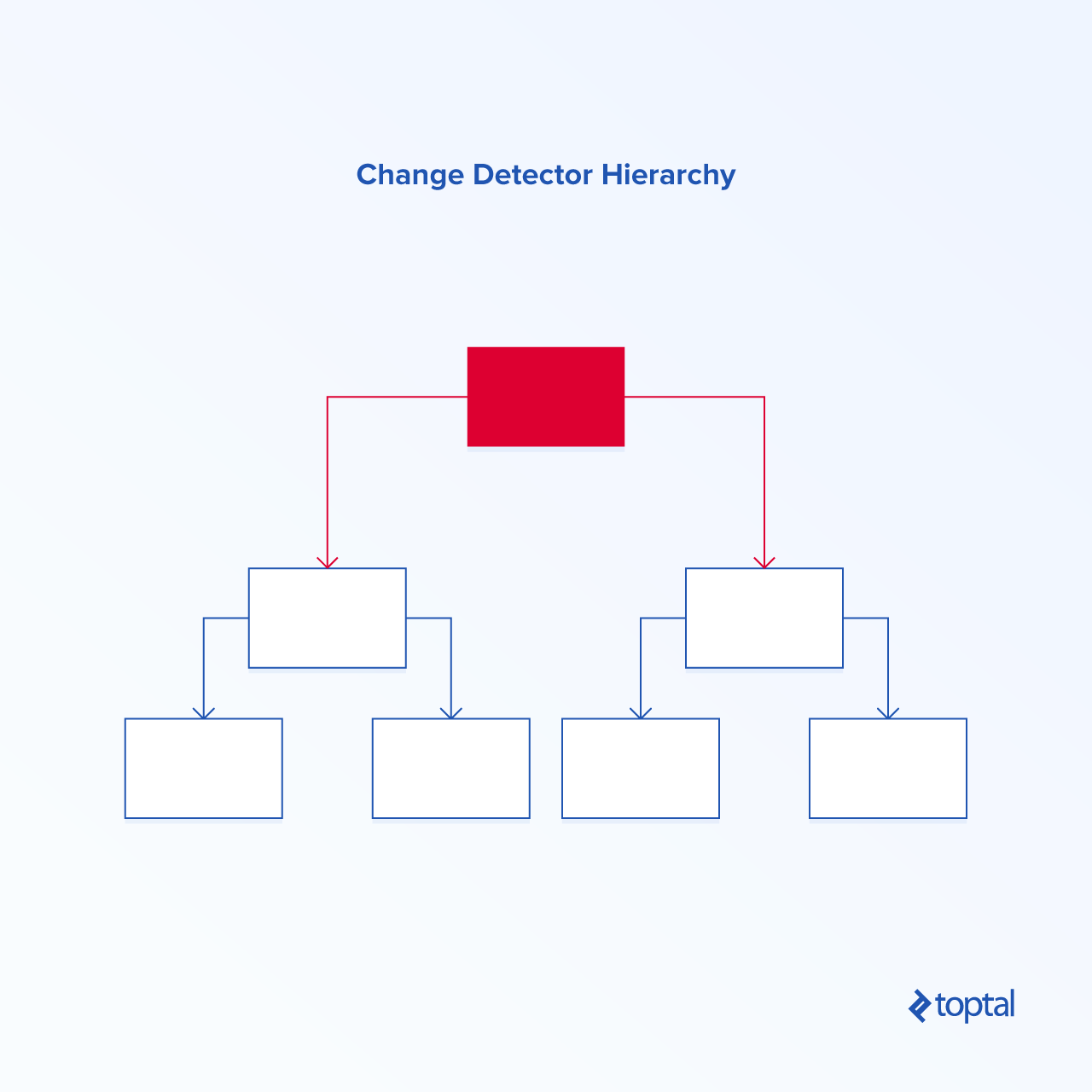 The change detectors provide a way to keep track of the component’s previous and current states as well as its structure in order to report changes to Angular.

If Angular gets the report from a change detector, it instructs the corresponding component to re-render and update the DOM accordingly.

In order to understand what a change detection strategy is and why it works, we must first understand the difference between value types and reference types in JavaScript. If you are already familiar with how this works, you can skip this section.

To get started, let’s review value types and reference types and their classifications.

For simplicity, one can imagine that these types simply store their value on the stack memory (which is technically not true but it’s sufficient for this article). See the stack memory and its values in the image below for example. 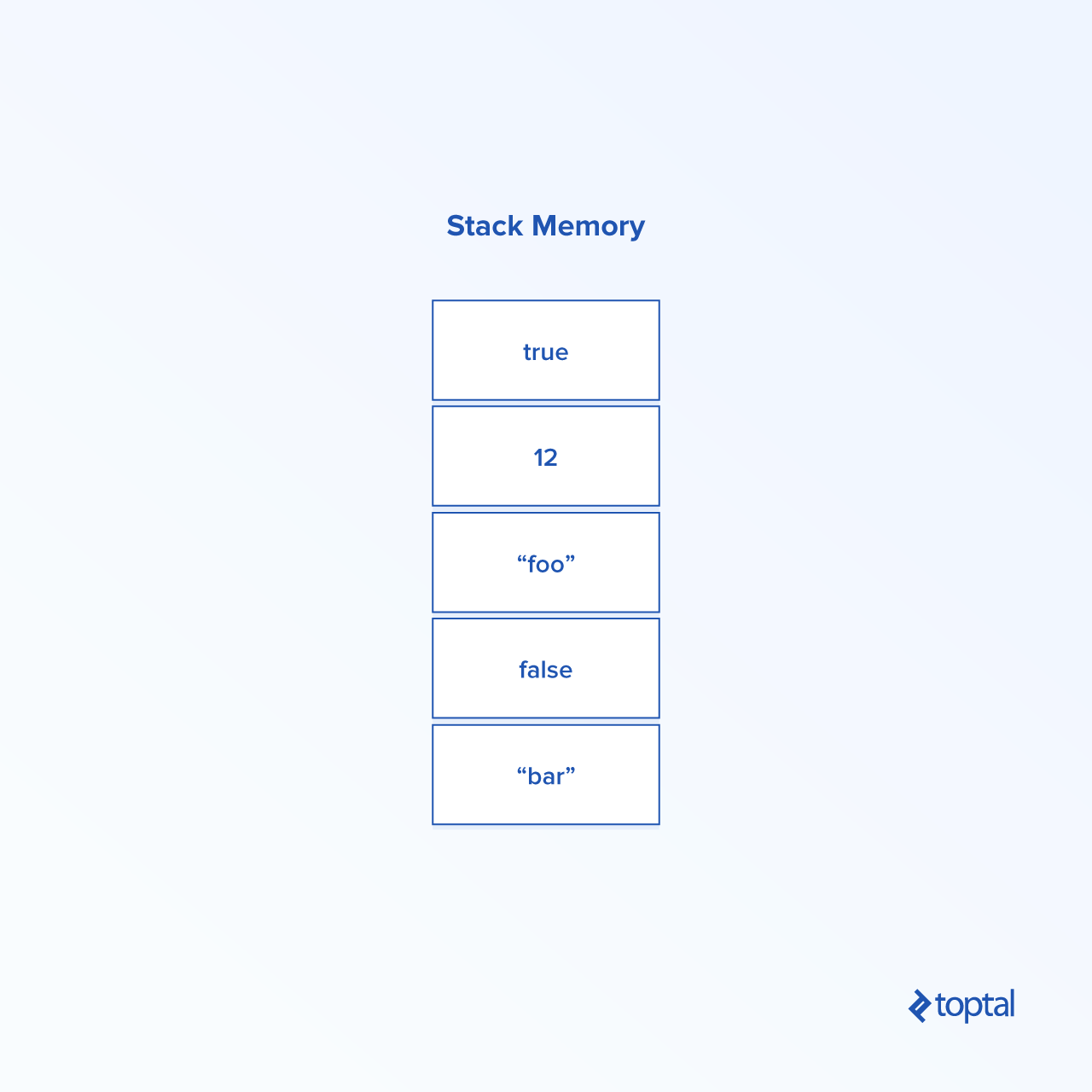 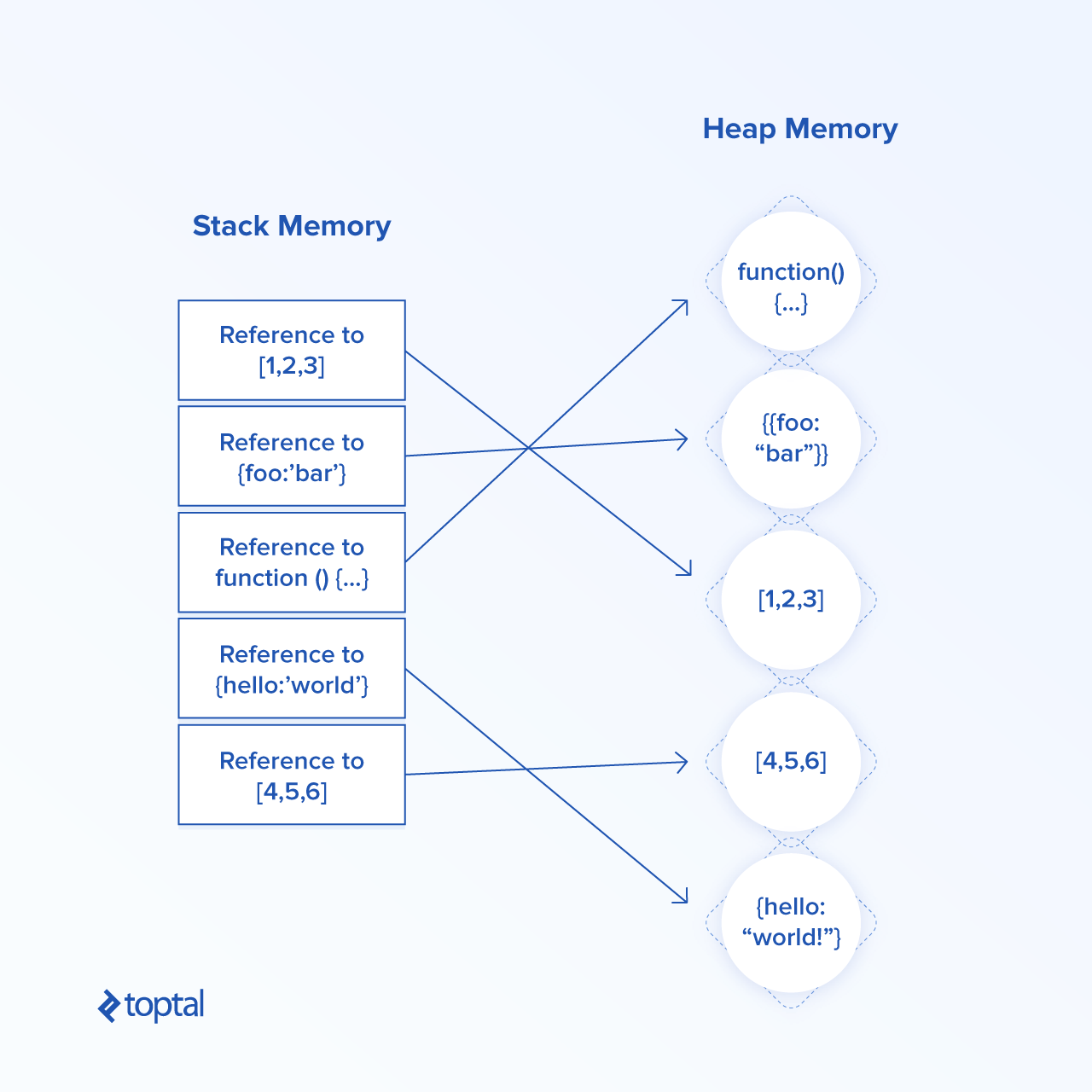 As we stated earlier, Angular monitors changes on the model in order to make sure it catches all of the changes. It will check for any differences between the previous state and current state of the overall application model.

The main idea behind the OnPush strategy manifests from the realization that if we treat reference types as immutable objects, we can detect if a value has changed much faster. When a reference type is immutable, this means every time it is updated, the reference on the stack memory will have to change. Now we can simply check: Has the reference (in the stack) of the reference type changed? If yes, only then check all the values (on the heap). Refer back to the previous stack heap diagrams if this is confusing.

The OnPush strategy basically asks two questions instead of one. Has the reference of the reference type changed? If yes, then have the values in heap memory changed?

For example, assume we have an immutable array with 30 elements and we want to know if there are any changes. We know that, in order for there to be any updates to the immutable array, the reference (on the stack) of it would have to have changed. This means we can initially check to see if the reference to the array is any different, which would potentially save us from doing 30 more checks (in the heap) to determine which element is different. This is called the OnPush strategy.

So, you might ask, what does it mean to treat reference types as immutable? It means we never set the property of a reference type, but instead reassign the value all together. See below:

Note that, in the examples above, we are “treating” reference types as immutable by convention, so in the end we are still working with mutable objects, but just “pretending” they are immutable.

So how do you implement OnPush strategy for a component? All you need to do is add the changeDetection parameter in their @Component annotation.

It is a good idea to enforce immutability if one decides to use the OnPush strategy on an Angular component. That is where Immutable.js comes in.

Immutable.js is a library created by Facebook for immutability in JavaScript. They have many immutable data structures, like List, Map, and Stack. For the purposes of this article, List and Map will be illustrated. For more reference, please check out the official documentation here.

In order to add Immutable.js to your projects, please make sure to go into your terminal and run:

This is how an Immutable.js Map can be used:

And, an Array can be used:

There are a couple main arguable drawbacks of using Immutable.js.

As you may have noticed, it’s a bit cumbersome to use its API, and a traditional JavaScript developer may not like this. A more serious problem has to do with not being able to implement interfaces for your data model since Immutable.js doesn’t support interfaces.

You may be asking why the OnPush strategy is not the default strategy for Angular. I presume it is because Angular didn’t want to force JavaScript developers to work with immutable objects. But, that doesn’t mean you are forbidden from using it.

If that is something you want to leverage in your next web project, you now know how easy Angular makes it to switch to a different change detection strategy.

What is change detection in Angular?

In Angular, when you change any of your models, the framework detects the changes and immediately updates the relevant views. This ensures the underlying views are always in sync.

Ahmet has over five years of industry experience in Java. He's also led the internal AngularJS training at Target and has developed iOS apps with more than 8,000 downloads. A work highlight of Ahmet's is when he solved the unique problem of estimating a user's current location in a building; the building structure hindered the weak satellite signals that the Sky Walker app (iOS) needed. He's also a US-certified chess master (top one percentile).

Ahmet Shapiro-Erciyas
Hi Phat, <a href="#https://angular.io/api/forms/NgModel">Models</a> are a part of the MVC pattern that Angular uses - where Models reflect the data that the view uses. We do mention views, but you don't have to be concerned with the low level details about view or viewstate in order to grasp the change detection strategy in the article. Hopefully that helps, best.
Sundar V
Nice one. Probably, there could be a section on how we could also use observables along with OnPush Change Detection strategy to build even more performant apps. Here is an even more detailed link by Victor Savkin on CD in Angular: https://vsavkin.com/change-detection-in-angular-2-4f216b855d4c
Phat Pham Xuan
Please help me! I'm a beginner in Angular and i don't understand when you mention "When you change any of your models". What's models in Angular? It's like a Object or something. When i write a demo, i can't understand why DoCheck() catch when i use settimeout() or setInterval() and i belive your's article will help you. Everything i know about "change detection" is the way Angular use to check DOM update up on ViewState, maybe: data binding, DOM event handler,... but in you article, you don't mention anything about view or viewstate. Can you help me? Thankyou so much!
comments powered by Disqus

Are you an Angular developer?