How to Get Rounded Corner Shapes In C++ Using Bezier Curves and QPainter: A Step by Step Guide

The current trend in graphics design is to use lots of rounded corners in all sorts of shapes. We can observe this fact on many web pages, mobile devices, and desktop applications. The most notable examples are the application push buttons, which are used to trigger some action when clicked. Instead of strictly rectangular shape with 90-degree angles in the corners, they are often drawn with rounded corners. Rounded corners make the user interface feel smoother and nicer. I am not entirely convinced about this, but my designer friend tells me so.

The visual elements of user interfaces are created by designers, and the programmer only has to put them in the right places. But what happens, when we have to generate a shape with rounded corners on the fly, and we cannot preload it? Some programming libraries offer limited capabilities for creating predefined shapes with rounded corners, but usually, they cannot be used in more complicated cases. For example, Qt framework has a class QPainter, which is used to draw on all classes derived from QPaintDevice, including widgets, pixmaps, and images. It has a method called drawRoundedRect, which, just as the name suggests, draws a rectangle with rounded corners. But if we need a little more complex shape, we have to implement it ourselves. How could we do that with a polygon, a planar shape bounded by a group of straight line segments? If we have a polygon drawn with a pencil on a piece of paper, my first idea would be to use an eraser and delete a small part of the lines at each corner and then connect the remaining segment ends with a circular arc. The entire process can be illustrated in the figure below. 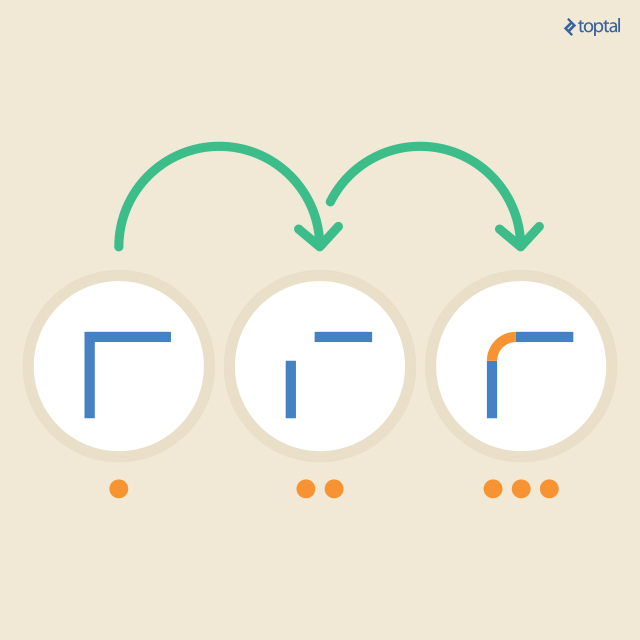 Class QPainter has some overloaded methods named drawArc, which can draw circular arcs. All of them require parameters, which define the arc center and size, starting angle and the arc length. While it is easy to determine the necessary values of these parameters for a non-rotated rectangle, it is an entirely different matter when we are dealing with more complex polygons. Plus, we would have to repeat this calculation for every polygon vertex. This calculation is a lengthy and tiresome task, and humans are prone to all sorts of calculation errors in the process. However, it is the software developers’ job to make computers work for human beings, and not vice-versa. So, here I am going to show how to develop a simple class, which can turn a complex polygon into a shape with rounded corners. Users of this class will only have to append polygon vertices, and the class will do the rest. The essential mathematical tool I use for this task, is the Bezier curve.

There are lots of mathematical books and internet resources describing the theory of Bezier curves, so I will briefly outline the relevant properties. 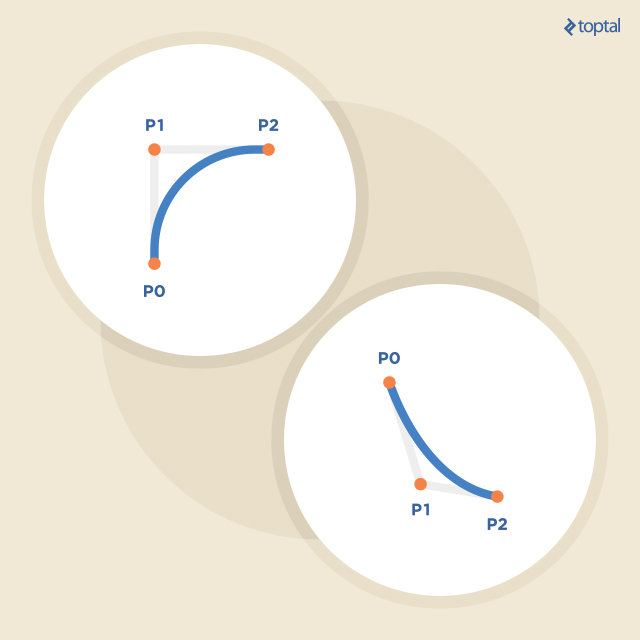 So, how do we solve our problem using Bezier curves? The figure below offers an explanation. 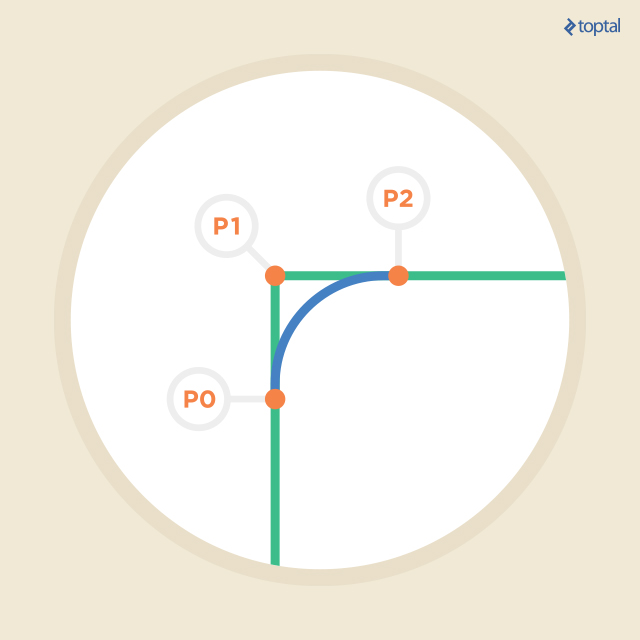 Class QPainter does not have a way to draw quadratic Bezier curves. While it is quite easy to implement it from scratch following the equation (1), the Qt library does offer a better solution. There is another powerful class for 2D drawing: QPainterPath. Class QPainterPath is a collection of lines and curves that can be added and used later with the QPainter object. There are some overloaded methods that add Bezier curves to a current collection. In particular, methods quadTo will add a quadratic Bezier curves. The curve will start at the current QPainterPath point (P0), while P1 and P2 have to be passed to quadTo as parameters.

QPainter’s method drawPath is used to draw a collection of lines and curves from QPainterPath object, which has to be given as parameter, with active pen and brush.

So let’s see the class declaration:

I decided to subclass QPolygon so that I do not have to implement adding vertices and other stuff by myself. Besides the constructor, which just sets the radius to some sensible initial value, this class has two other public methods:

The methods from the private part are just auxiliary methods used by GetPath.

Let’s see the implementation and I will start with the private methods:

Not much to explain here, the method returns the Euclidian distance between the given two points.

Method GetLineStart calculates the location of point P2 from the last figure, if the points are added to the polygon in the clockwise direction. More precisely, it will return a point, which is m_uiRadius pixels away from i-th vertex in the direction towards the (i+1)-th vertex. When accessing the (i+1)-th vertex, we have to remember that in the polygon, there is also a line segment between the last and the first vertex, which makes it a closed shape, thus the expression (i+1)%count(). This also prevents the method from going out of range and accesses the first point instead. Variable fRat holds the ratio between the radius and the i-th line segment length. There is also a check that prevents fRat from having a value over 0.5. If fRat had a value over 0.5, then the two consecutive rounded corners would overlap, which would cause a poor visual result.

This is how the GetLineStart method determines the location of the point that is m_uiRadius pixels away from i-th vertex in the direction of (i+1)-th.

This method is very similar to GetLineStart. It calculates the location of point P0 for the (i+1)-th vertex, not i-th. In other words, if we draw a line from GetLineStart(i) to GetLineEnd(i) for every i between 0 and n-1, where n is the number of vertices in the polygon, we would get the polygon with erased vertices and their near surroundings.

And now, the main class method:

Now it’s time to see how to use this class in practice.

This piece of source code is quite straightforward. After initializing two QPixmaps and their QPainters, we create a RoundedPolygon object and fill it with points. Painter P1 draws the regular polygon, while P2 draws the QPainterPath with rounded corners, generated from the polygon. Both resulting pixmaps are saved to their files, and the results are as follows:

We have seen that generating a shape with rounded corners from a polygon is not so difficult after all, especially if we use a good programming framework such as Qt. This process can be automated by the class that I have described in this blog as a proof of concept. However, there is still a lot of room for improvement, such as:

Altogether, the RoundedPolygon class, as it is, can be used as a tool anytime we want to add a designer touch to our GUI on the fly, without preparing pixmaps or shapes in advance.

Related: How to Learn the C and C++ Languages: The Ultimate List

During his career as a computer programmer and assistant professor at the Faculty of Computer and Information Science, Bojan has gained a wealth of experience in different computer science fields. He has learned to develop professional, well-documented, and easy-to-maintain applications for all of his clients.

Eugene
Just a small note regarding "it is easy to determine the necessary values of these parameters for a non-rotated rectangle" - it should be easy just as well for any rotated rectangle, as QPainter has some neat methods to rotate its coordinate system prior to drawing. Also it should be possible to do this for any non-right angle via shearing, but I've never tested it and I'm not sure how well it looks. But your method is definitely better in easing developers' job - thank you for the article.
Bojan Kverh
You are right, QPainter has methods to rotate, scale and translate the origin (and to set up general affine transformations), so it's fairly easy to draw rotated and deformed rectangles with rounded corners indeed, thanks for pointing that out.
comments powered by Disqus