James Cahall
James is a veteran, result-driven engineer with 7+ years of C-level experience. He is lead developer of a service with 8 million users.
SHARE

When it comes to iOS architecture patterns, the Model-View-Controller (MVC) design pattern is great for the longevity and maintainability of an application’s codebase. It allows classes to be easily reused or replaced to support various requirements by decoupling them from each other. This helps to maximize the advantages of Object Oriented Programming (OOP).

While this iOS application architecture works well on the micro level (individual screens/sections of an app), you may find yourself adding similar functions to multiple models as your app grows. In cases such as networking, moving common logic out of your model classes and into singleton helper classes can be a better approach. In this AFNetworking iOS tutorial, I’ll teach you how to set up a centralized singleton networking object that, decoupled from micro-level MVC components, can be reused throughout your decoupled architecture application. 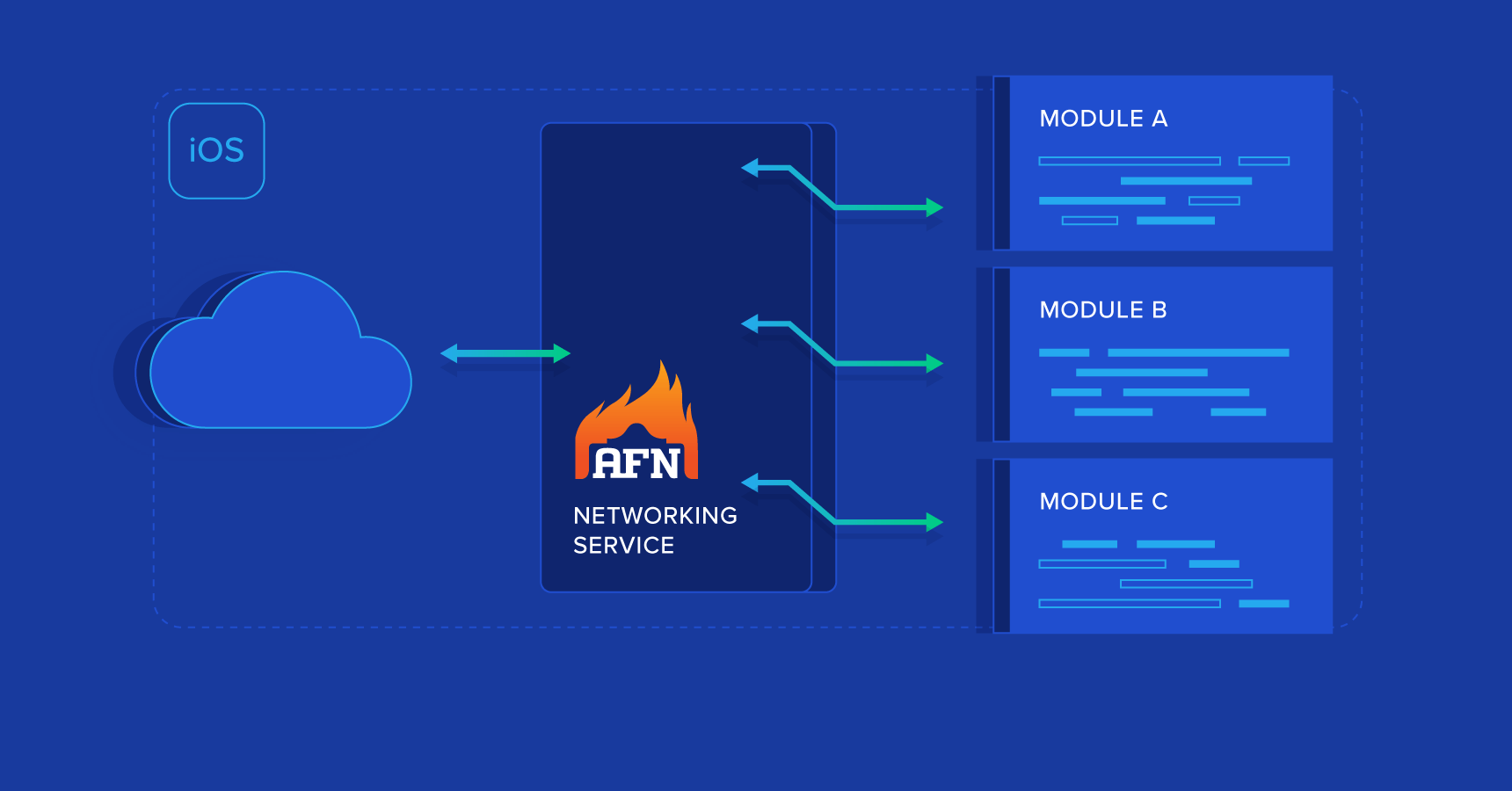 The Problem with iOS Networking

Apple has done a great job of abstracting many of the complexities of managing mobile hardware in easy to use iOS SDKs, but in some cases, such as networking, Bluetooth, OpenGL, and multimedia processing, classes can be cumbersome due to their goal to keep the SDKs flexible. Thankfully, the rich iOS developer community has created high-level frameworks to simplify most common use cases in an effort to simplify application design and structure. A good programmer, employing ios app architecture best practices, knows which tools to use, why to use them, and when it is better to write your own tools and classes from scratch.

AFNetworking is a great networking example, and one of the most commonly used open source frameworks, which simplifies a developer’s day-to-day tasks. It simplifies RESTful API networking and creates modular request/response patterns with success, progress, and failure completion blocks. This eliminates the need for developer-implemented delegate methods and custom request/connection settings and can be included in any class very quickly.

AFNetworking is great, but its modularity can also lead to its use in fragmented ways. Common inefficient implementations may include:

For applications with limited numbers of views, few API calls to implement, and ones that aren’t likely to change often, this may not be of great concern. However, more likely you are thinking big and have many years of updates planned. If your case is the latter, you’ll likely end up needing to handle:

If your networking code is scattered all over your codebase, this is now a potential nightmare. Hopefully, you have at least some of your parameters defined statically in a common header, but even then you may touch a dozen classes for even the most minor changes.

How Do We Address AFNetworking Limitations?

Create a networking singleton to centralize the handling of requests, responses, and their parameters.

A singleton object provides a global point of access to the resources of its class. Singletons are used in situations where this single point of control is desirable, such as with classes that offer some general service or resource. You obtain the global instance from a singleton class through a factory method. – Apple

So, a singleton is a class that you would only ever have one instance of in an application that exists for the life of the application. Additionally, because we know there is only one instance, it is easily accessible by any other class that needs to access its methods or properties.

Here’s why we should use a singleton for networking:

Some reasons not to use singletons:

A Simple Singleton Example with AFNetworking

First, as a prerequisite, add AFNetworking to your project. The simplest approach is via Cocoapods and instructions are found on its GitHub page.

While you are at it, I’d suggest adding UIAlertController+Blocks and MBProgressHUD (again easily added with CocoaPods). These are clearly optional but this will greatly simplify progress and alerts should you wish to implement them in the singleton on the AppDelegate window.

Once AFNetworking is added, start by creating a new Cocoa Touch Class called NetworkManager as a subclass of NSObject. Add a class method for accessing the manager. Your NetworkManager.h file should look like the code below:

Next, implement the basic initialization methods for the singleton and import the AFNetworking header. Your class implementation should look like the following (NOTE: This assumes you are using Automatic Reference Counting):

Great! Now we are cooking and ready to add properties and methods. As a quick test to understand how to access a singleton, let’s add the following to NetworkManager.h:

And the following to NetworkManager.m:

Then in our main ViewController.m file (or whatever you have), import NetworkManager.h and then in viewDidLoad add:

Launch the app and you should see the following in the output:

Testing our the networking singleton for appID: 1, HOST: http://www.apitesting.dev/, and PORT: 80

Ok, so you likely won’t mix #define, static const, and @property all at once like this but simply showing for clarity your options. “static const” is a better declaration for type safety but #define can be useful in string building since it allows using macros. For what it’s worth, I’m using #define for brevity in this scenario. Unless you are using pointers, there isn’t much in-practice difference between these declaration approaches.

Now that you understand #defines, constants, properties, and methods, we can remove those and move on to more relevant examples.

Imagine an application where the user must be logged in to access anything. Upon app launch, we’ll check if we’ve saved an authentication token and, if so, perform a GET request to our API to see if the token has expired or not.

In AppDelegate.m, let’s register a default for our token:

We’ll add a token check to the NetworkManager and get feedback on the check via completion blocks. You can design these completion blocks however you like. In this example, I’m using success with the response object data and failure with the error response string and a status code. Note: Failure may be optionally left out if it doesn’t matter to the receiving side such as incrementing a value in analytics.

If you added MBProgressHUD, it can be used here:

And our token check request:

Now, in the ViewController.m viewWillAppear method, we’ll call this singleton method. Notice the simplicity of the request and the tiny implementation on the View Controller side.

That’s it! Notice how this snippet could be used virtually in any application that needs to check authentication on launch.

Similarly, we can handle a POST request for login: NetworkManager.h:

We can get fancy here and add alerts with AlertController+Blocks on the AppDelegate window or simply send failure objects back to the view controller. Additionally, we could save the user credentials here or instead let the view controller handle that. Usually, I implement a separate UserManager singleton that handles credentials and permissions that can communicate with the NetworkManager directly (personal preference).

Once again, the view controller side is super simple:

Oops! We forgot to version the API and send the device type. Additionally, we’ve updated the endpoint from “/checktoken” to “/token”. Since we centralized our networking, this is super easy to update. We don’t need to dig through our code. Since we’ll use these parameters on all requests, we’ll create a helper.

Any number of common parameters can easily be added to this in the future. Then we can update our token check and authenticate methods like so:

Wrapping Up Our AFNetworking Tutorial

We’ll stop here but, as you can see, we’ve centralized common networking parameters and methods in a singleton manager, which has greatly simplified our view controller implementations. Future updates will be simple and fast and, most importantly, it decouples our networking from the user experience. Next time the design team asks for a UI/UX overhaul, we will know our job is already done on the networking side!

In this article we focused on a networking singleton but these same principles could be applied to many other centralized functions such as:

We also focused on an iOS application architecture but this could just as easily be extended to Android and even JavaScript. As a bonus, by creating highly defined and function-oriented code, it makes porting apps to new platforms a much quicker task.

To sum up, by spending a little extra time in early project planning to establish key singleton methods, like the networking example above, your future code can be cleaner, simpler, and more maintainable.

AFNetworking is an open source networking library for iOS and macOS that simplifies a developer’s tasks with a RESTful networking API and creates modular request/response patterns with success, progress, and failure completion blocks. It has a very active developer community and is used in some of the best apps.

What is a singleton object?

A singleton object is a class that you would only ever have one instance of in an application that exists for the life of the application. Additionally, because we know there is only one instance, it is easily accessible by any other class that needs to access its methods or properties.

James R. Cahall
The purpose of setting up the completion block as a declared parameter is to allow reuse and reduction of redundant code. Additionally, when a declared parameter, type checking works better in Xcode when put in a header import (reducing the chance for potential bugs)
Sergey Vinogradov
Good practice, but it this case better to use block like `- (void)registerUser:(MUser *)user completion:(void (^)(id result, NSError *error))completion {}`
comments powered by Disqus

Are you an iOS developer?