One Size Fits Some: A Guide to Responsive Web Design Image Solutions

Kado Damball
Kado is a JavaScript developer with a keen interest in data and data visualizations. He is also a machine learning and data mining hobbyist.
SHARE
Read the Spanish

As mobile and tablet devices come closer to achieving final world domination, web design and technology is in a race to accommodate the ever-growing number of screen sizes. However, devising tools to meet the challenges of this phenomenon brings a whole new set of problems, with one of the latest buzzwords to emerge being “responsive web”. This is the challenge of making the web work on most, if not all, devices without degrading the user’s experience. Instead of designing content to fit desktop or laptops, information has to be available for mobile phones, tablets or any surface connected to the web. However, this responsive web design evolution has proven to be a difficult and sometimes painful one.

While it can be almost trivial to accommodate textual information, the tricky part comes when we put into consideration content like responsive images, infographics, videos, an so forth, which were once designed with only desktops in mind. This not only brings up the question of displaying the content correctly, but also how the content itself is consumed using different devices. Users on smart phones are different to users on desktops. Things like data plans and processing speed have to be considered as well. Google has started to highlight mobile-friendly sites on its search results, with some speculating that it will lead to a substantial pagerank boost to such sites. Earlier solutions addressed this by deploying mobile-only subdomains (and redirects) but this increased complexity and fell out of fashion quickly. (Not every site has the ability to afford this route.)

On the Quest for Responsive Web Images 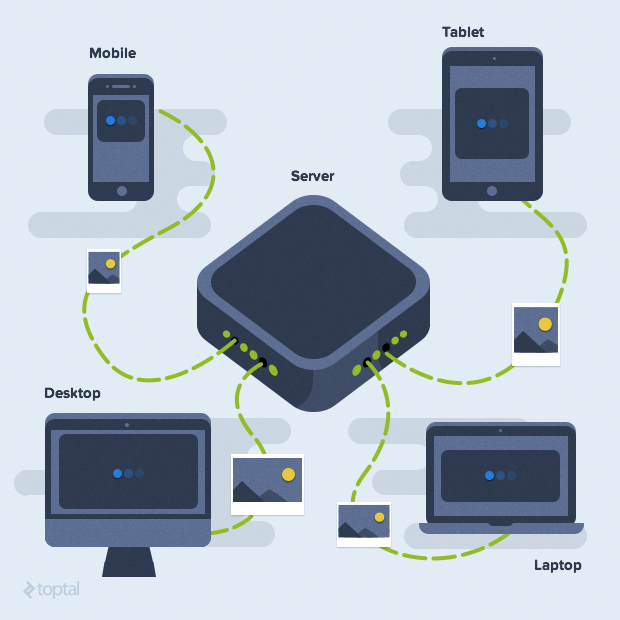 At this point, developers and designers have to ensure their website load is optimized to meet the users who are on mobile sites. Over 20% of web traffic is now mobile users, and the number is still rising. With images taking among the largest shares of page content data, it becomes a priority to reduce this load. Several attempts have been made to simplify responsive design image resizing, including, both server-side and front-end solutions. To discuss these responsive image solutions, we need to first understand the current image linking shortcomings.

The <img> tag has only the source attribute linking directly to the image itself. It has no way of determining the correct type of image needed without any add-ons.

Can’t we just have all the image sizes included in the HTML, and use CSS rules to display:none for all but the correct image? That is the most logical solution in a perfect logical world. This way the browser can ignore all the images not displayed and, in theory, not download them. However, browsers are optimized beyond common logic. To make the page render fast enough, the browser pre-fetches linked content before even the necessary stylesheets and JavaScript files are fully loaded. Instead of ignoring the large images intended for desktops, we end up having downloaded all images and resulting in an even larger page load. The CSS-only technique only works for images intended as background images because these can be set within the stylesheet (using media queries). 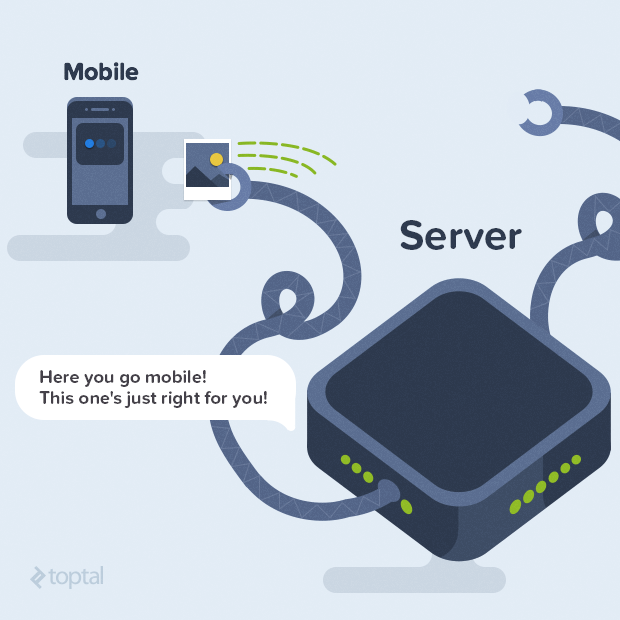 Barring mobile-only sites/sub-domains, we are left with sniffing user-agent (UA) and using it to serve the correctly sized images back to the user. However, any developer can attest how unreliable this solution can be. New UA strings keep popping up all the time, making it strenuous to maintain and update a comprehensive list. And of course, this doesn’t even take into account the unreliability of easily-spoofed UA strings in the first place.

However, some server-side solutions are worthy of consideration. Adaptive Images is a great solution for those preferring a back-end responsive image fix. It does not require any special markup but instead uses a small JavaScript file and does most of the heavy work in its back-end file. It uses a PHP and nginx configured server. It also does not rely on any UA sniffing but instead checks for the screen width. Adaptive Images works great for scaling down images, but it’s also handy for when large images need art direction, i.e. image reduction by techniques such as cropping and rotation - not merely scaling.

Sencha Touch is another back-end responsive design image solution, although it is better to refer to it as a third-party solution. Sencha Touch will resize the image accordingly by sniffing the UA. Below is a basic example of how the service works:

There is also an option to specify the image sizes, in case we do not want Sencha to resize the image automatically.

At the end of the day, server-side (and third party) solutions require resources to process the request before sending the correct image back. This takes precious time and in turn slows down the request-response trip. A better solution might be if the device itself determined which resources to request directly, and the server responding accordingly. 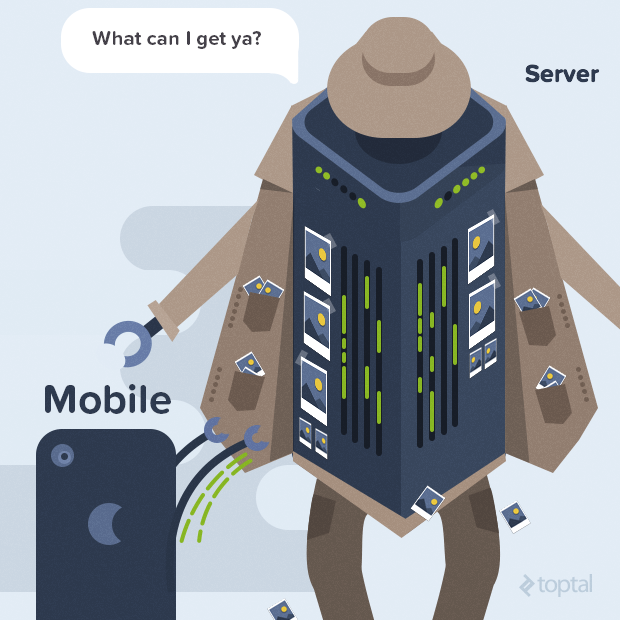 In recent times, there have been great improvements on the browser side to address responsive images.

The <picture> element has been introduced and approved in the HTML5 specification by the W3C. It is currently not widely available on all browsers but it will not be long before it is natively available. Until then, we rely on JavaScript polyfills for the element. Polyfills are also a great solution for legacy browsers lacking the element.

There is also the case of the srcset attribute that is available for several webKit based browsers for the <img> element. This can used without any JavaScript and is a great solution if non-webKit browsers are to be ignored. It is a useful stop-gap for the odd case where other solutions fall short, but should not be considered a comprehensive solution.

To improve performance on users with limited data plans, Picturefill can be combined with lazy loading. However, the library could offer wider browser support and address the odd cases rather than relying on patches.

Imager.js is a library created by BBC News team to accomplish responsive images with a different approach to the one used by Picturefill. While Picturefill attempts to bring the <picture> element to unsupported browsers, Imager.js focuses on downloading only the appropriate images while also keeping an eye out for network speeds. It also incorporates lazy loading without relying on third-party libraries. It works by using placeholder elements and replacing them with <img> elements. The sample code below exhibits this behavior:

Browser support is much better than that of Picturefill at the expense of being a more pragmatic solution than a forward thinking one.

Source Shuffling approaches the responsive image problem from a slightly different angle than the rest of front-end libraries. It resembles something out of the “mobile first” school of thought, whereby it serves the smallest resolution possible by default. Upon detecting that a device has a larger screen, it swaps the image source for a larger image. It feels like more of a hack and less of a full fledged library. This is a great solution for chiefly mobile sites but means double resource downloading for desktops and/or tablets is unavoidable.

Some other notable JavaScript libraries are:

At the end of the day, it is up to the developer to decide which responsive web design image approach suits the user base. This means data collection and testing will give a better idea of the approach to take.

To wrap up, the list of questions below can be helpful to consider before deciding the appropriate responsive image solution.

Kado is a JavaScript developer with a keen interest in data and data visualizations. He is also a machine learning and data mining hobbyist, a by-product of his BA in Economics. He currently works as a freelance developer.

Cole
Great post. I would also recommend ImgIX - http://www.imgix.com/
bahilleli .
You seem to suggest that display: "none" prevents downloading 'in theory'. Both 'in theory' and 'practice', this is not so for the vast majority of browsers. We routinely use display: none for items that aren't to be shown on initial load, but a network trace clearly shows that these files are still being downloaded (o/w when we want to show them there would be a delay!). And here is somebody who has tested various flavours of css to attempt this: http://timkadlec.com/2012/04/media-query-asset-downloading-results/
Kado
The 'display:none' behaviour was used as an tongue-in-cheek reference in the article. The summary is more clear about this. Apologies for confusion.
Cyrus
You are comparing the world we live in with the author's perfect world. None of your above things will be valid in a perfect world as it will just work! In a perfect world there would only be Chrome anyways :P
Rodrigo Alves
I created a solution to this problem that works by simply defining a pattern on where to look for images according to the device screen https://github.com/rodrigoalvesvieira/afterload.js
Jessica Green
Viewing images and graphics on different devices can really be tricky. Good thing that responsive design is now available. <a href="http://katakuru.com/pretoria-web-design-company/"></a>
comments powered by Disqus