Josip Šaban
With two Master's degrees and having worked for the largest Slovenian enterprises, Josip is a veteran of Microsoft business/database tech.
SHARE

Data is a key asset of any company, particularly transactional data which holds business secrets such as financial or health records. Data is most vulnerable in transit between the server that stores it and that client that requests it.

The standard approach to ensuring security is to encrypt data on the server and use the SSL-enabled HTTPS protocol to secure data in transport. However, what if we could increase the level of security even further, by using HTTPS and sending data in an encrypted format over the communication line, only to decrypt data on clients who have valid certificates? That approach would make a traditional man-in-the-middle (MITM) attack much more difficult. 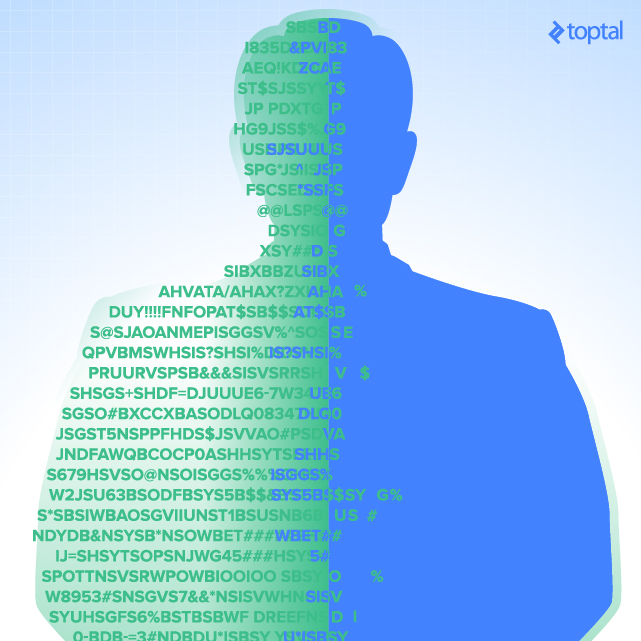 Microsoft’s solution to this problem is Always Encrypted, a way to send encrypted data over the pipeline and decrypt it only by users with access to valid certificates. So, even if the attacker gets the data, without a proper certificate stored on the client machine, the data would be useless.

This article describes how to set up and use Always Encrypted, and it’s recommended reading for anyone who is sending important data over the public communication lines, even if they are secured with SSL.

The Concept Behind Always Encrypted

At this time, the only Always Encrypted-enabled drivers are the .NET Framework Data Provider for SQL Server, which requires installation of .NET Framework version 4.6 on the client computer, and the JDBC 6.0 driver. That will probably change in time, but these are the official Always Encrypted requirements as of April 2017.

But why do we need this technology? There are a couple of good reasons why Always Encrypted should be used:

How to Use Always Encrypted

Using Always Encrypted requires a small amount of preparation within the database server storing the encrypted tables. The preparation is a two-step process:

So what’s a column master key? 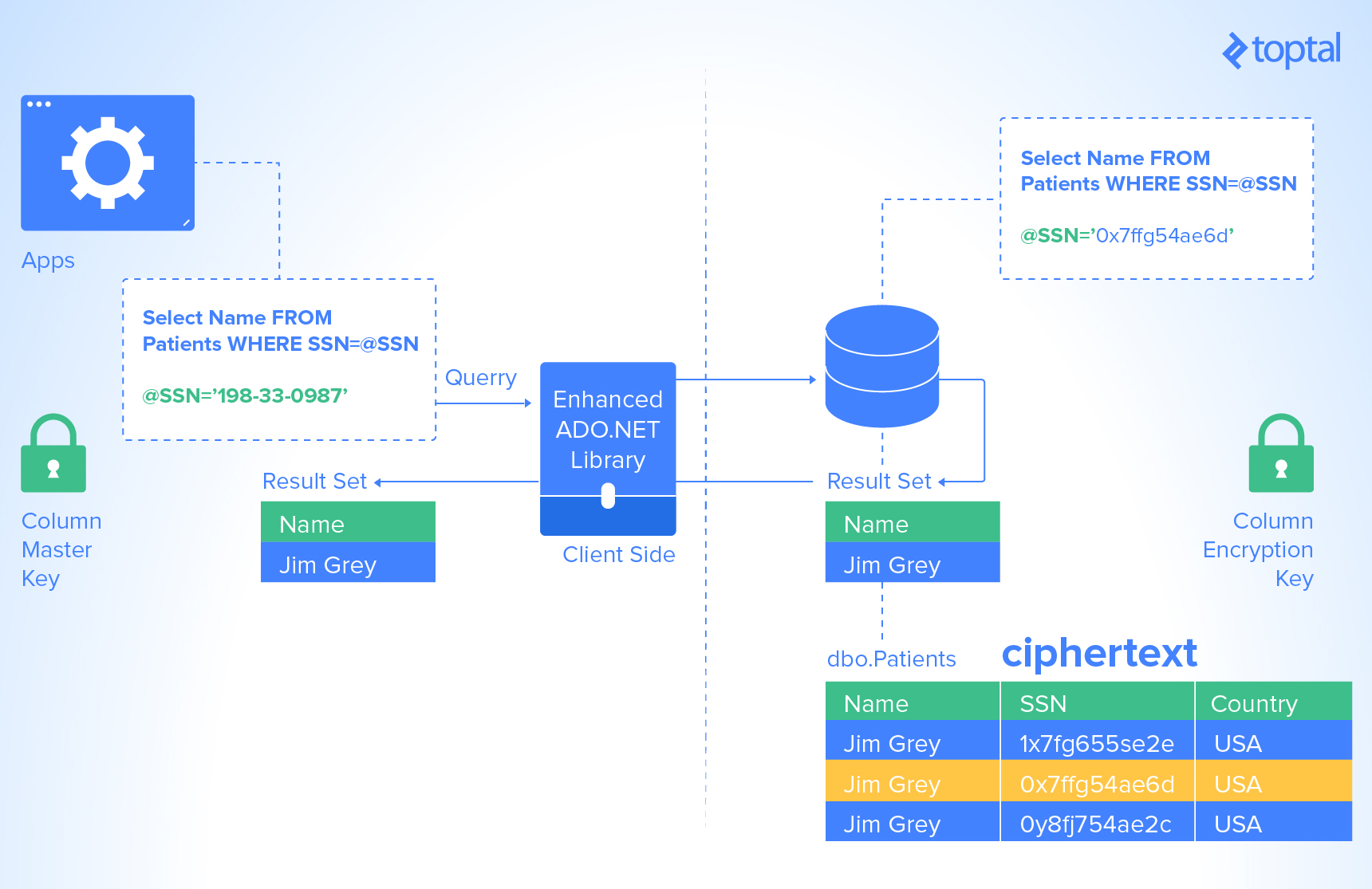 The application that is encrypting the data uses the column master key to protect various column encryption keys that handle the encryption of data within the columns of a database table. Using certificate stores from SQL Server, which are sometimes referred to as Enterprise Key Manager, requires the use of SQL Server Enterprise Edition.

In this article, we describe the use of a self-signed certificate that you store in the Microsoft Certificate Store of the Windows operating system. While this is approach is not the optimal configuration, it demonstrates the concept of Always Encrypted—but it also needs to be stated that this approach is not acceptable for production environments, where certificate management must be done with separate, secured user accounts and, preferably, on separate servers.

You can create a column master key definition by using the graphical interface within SQL Server Management Studio (SSMS) or by using T-SQL. In SSMS, connect to the SQL Server 2016 database instance in which you want to use Always Encrypted to protect a database table.

In Object Explorer, navigate first to the database, then to Security, and then expand the Always Encrypted Keys folder to display its two subfolders, as shown in the following figures:

Create a key in SSMS. 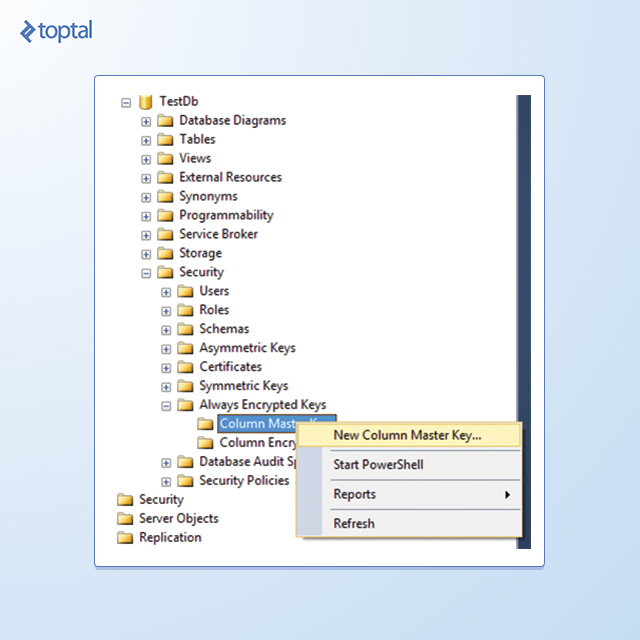 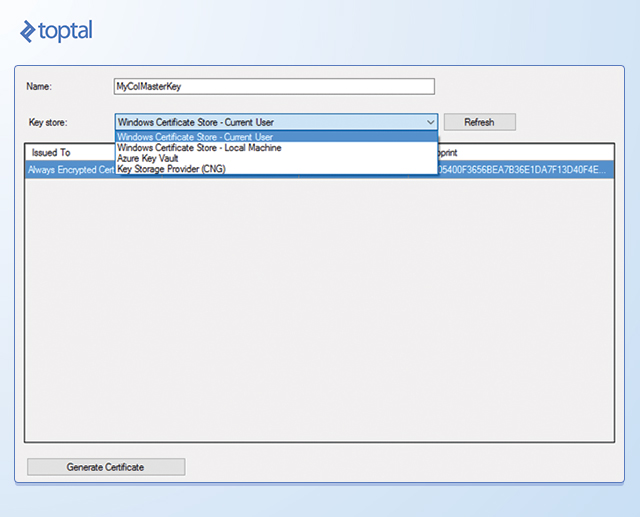 Check the key's existence in the Windows Certificate Store. 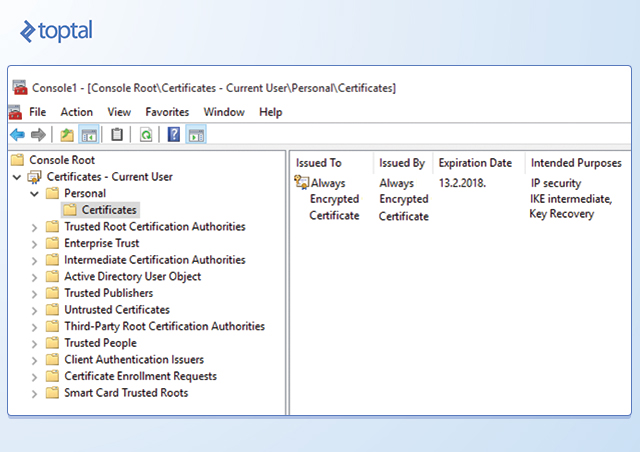 Note: You should perform these steps on a trusted machine, but not on the computer hosting your SQL Server instance. That way, the data remains protected in SQL Server even if the host computer is compromised.

You can find applicable instructions for exporting and importing certificates for your operating system at the following URLs: 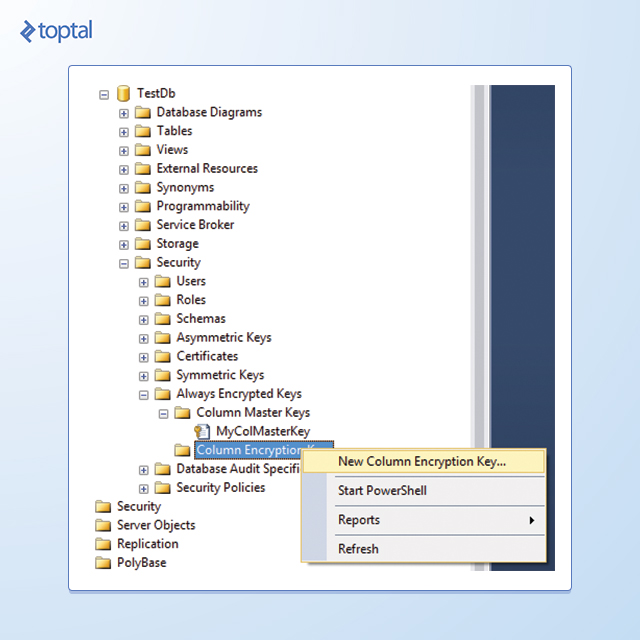 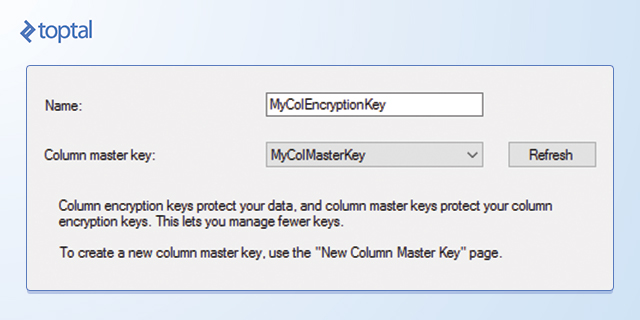 Creating a Table with Encrypted Values

After creating the column master key definition and column encryption keys, you can create a table to hold the encrypted values.

Before you do this, you must decide what type of encryption to use, which columns to encrypt, and whether you can index these columns. With the Always Encrypted feature, you define column sizes normally, and SQL Server adjusts the storage size of the column based on the encryption settings. After you create your table, you might need to change your application to execute commands on this table using Always Encrypted.

Before creating a table to contain encrypted values, you must decide whether or not each column should be encrypted.

First, will this column be used for looking up values or just returning those values?

If the column is going to be used for lookups, the column must use a deterministic encryption type, which allows for equality operations. However, there are limitations on searching for data that has been encrypted by using the Always Encrypted feature. SQL Server 2016 supports only equality operations, which include equal to, not equal to, joins (which use equality), and using the value in the GROUP BY clause. Any search using LIKE is not supported. Additionally, sorting data that is encrypted using Always Encrypted must be done at the application level, as SQL Server will sort based on the encrypted value rather than the decrypted value.

If the column is not going to be used for locating records, then the column should use the randomized encryption type. This type of encryption is more secure, but it does not support searches, joins, or grouping operations.

Creating a Table with Encrypted Columns

Because encrypted values can be indexes, no additional performance-tuning measures are required for values encrypted with Always Encrypted beyond the indexing and tuning that you normally perform. Additional network bandwidth and greater I/O are the only side effects that result from the increased size of the values being returned.

Performance is always a key factor, especially in this case, when we are adding overhead of encryption to usual database traffic. The best site to test performance is SQL Performance, which tested query execution and disk usage under various scenarios: 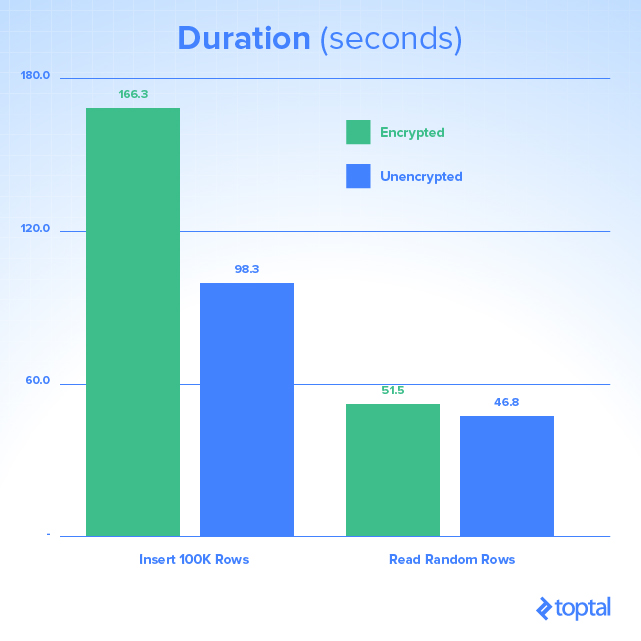 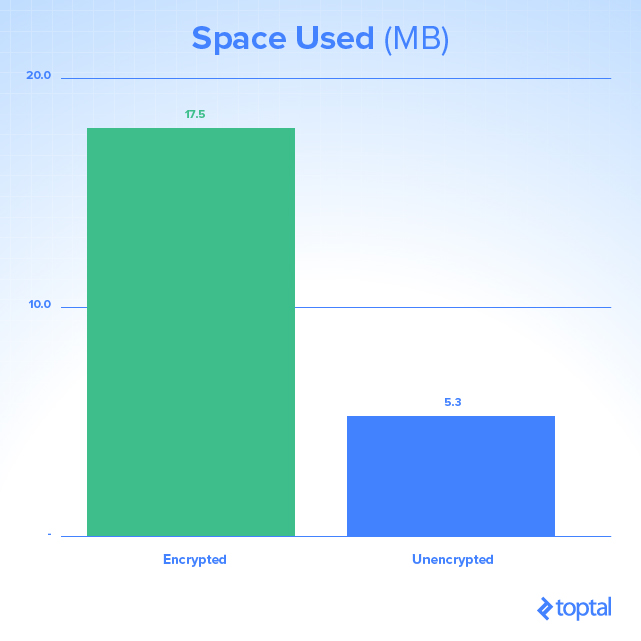 As there is CPU and hard drive work that needs to be performed with encryption and decryption processes, there is an obvious impact on the amount of storage space used and duration of queries. As this is influenced on your environment—CPU, RAM and disk features—you should test whether this will present a problem in production.

What do you have to do to properly implement Always Encrypted in legacy code?

Another change required to make Always Encrypted work is the addition of a connection string attribute to the connection string of the application connecting to the database: Column Encryption Setting=enabled.

Consequently, the .NET Framework provides a new method on the SqlConnection object called SqlCommandColumnEncryptionSetting, which has three possible values:

Note: Be aware that the use of this method can potentially require a significant amount of change to your application code. An alternative approach is to refactor your application to use different connections.

Is Always Encrypted Worth the Effort?

Not only does it helps prevent a lot of potential security concerns and provides SQL developers with added security features, but it also makes your system more compliant, which is vital in multiple industries, from telecoms to banking and insurance. It is also important to note that given technical prerequisites mentioned in the article, Always Encrypted can be implemented with minimal application changes to existing systems.

Although you might use custom solutions to get the same effect, this technology is bundled with new version of SQL Server, and can be used out-of-the-box. It is also important to note, as this is a new technology, there are still some limitations on its use, and it adds some extra hardware demenads.

However, unless they are a deal-breaker for your environment, and you have an application that is distributed outside your company’s Intranet, there is virtually no reason not to use Always Encrypted.

Josip is an experienced database guy who's developed websites, created banking DWH systems, and led development teams to deliver great products which are still in production today. He has advanced knowledge of the entire SQL Server stack and working knowledge of .NET, Business Objects, R, BizTalk, Microsoft Project, and MS Project Server. Along with his primary expertise, he is also a proficient technical writer and team lead.

Neale Upstone
Good to get coverage of an important feature. Some years ago I implemented this sort of field level encryption for www.eccosolutions.co.uk at the application level covering the numerous different SQL databases used by Ecco Solutions. If using these features, I'd recommend putting the effort in to encrypt field that you want to be able to search on. We devised algorithms to allow us to do this. Those algorithms do lessen the encyption strength, but the key here is to lessen the ability for a DBA to browse your data and discover personal information. They would still have a mountain to climb to crack the weakened fields, and all that would do is let them decrypt the family name. Your example of SSN is a good one for an encrypted key that you can use for search, as it either will be an exact match or will not be found.
Dilpreet
Can we remove this Encryption from the column permanently ?
sam s
Nice article… as usual. While the price is high I'm guessing it's better than the piecemeal approach that's currently in place. learn latest sql server course here: http://bit.ly/2MKpPBy
Sumit Verma
How to insert null/blank value to always encrypted column?
comments powered by Disqus

Stork: How to Make a Programming Language in C++