Eric W. Greene
Eric loves to write code in a high-paced and challenging environment with an emphasis on using best practices.
SHARE

With the rapid growth of JavaScript as a full stack language, more and more applications are utilizing frameworks that enable the web browser to handle more of the UI processing such as data binding, managing data views, transforming data and many other services. One of the most capable, extensible and popular frameworks is AngularJS, and one of the most useful components of the AngularJS framework is something called a directive. AngularJS provides many useful directives and, even more importantly, it provides a rich framework for creating custom directives.

In this tutorial, the four functions that execute as a directive is created and applied to the DOM will be explored and examples will be provided. This post assumes some familiarity with AngularJS and custom directives. If you’re newer to Angular, you might enjoy a tutorial on building your first AngularJS app.

The Four Functions of the AngularJS Directive Life Cycle

There are many options that can be configured and how those options are related to each other is important. Each directive undergoes something similar to a life cycle as AngularJS compiles and links the DOM. The directive lifecycle begins and ends within the AngularJS bootstrapping process, before the page is rendered. In a directive’s life cycle, there are four distinct functions that can execute if they are defined. Each enables the developer to control and customize the directive at different points of the life cycle.

The controller function facilitates directive communication. Sibling and child directives can request the controller of their siblings and parents to communicate information.

The pre-link function allows for private $scope manipulation before the post-link process begins.

The post-link method is the primary workhorse method of the directive.

In the directive, post-compilation DOM manipulation takes place, event handlers are configured, and so are watches and other things. In the declaration of the directive, the four functions are defined like this.

Commonly, not all of the functions are needed. In most circumstances, developers will simply create a controller and post-link function following the pattern below.

In this configuration, link refers to the post-link function.

Consider the following HTML snippet with the directives parentDir, childDir and grandChildDir applied to the HTML fragment.

The execution order of the functions within a directive, and relative to other directives, is as follows: 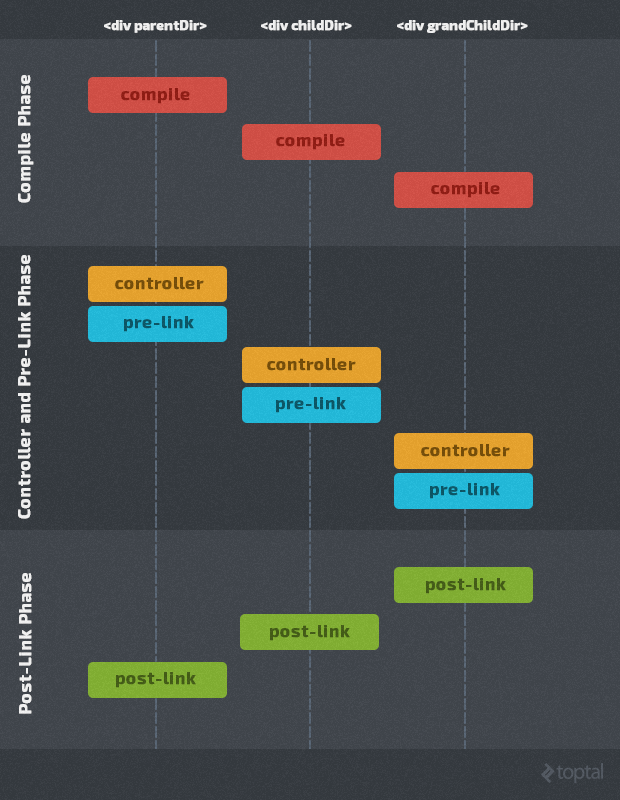 The compilation phase occurs first. Essentially, the compile phase attaches event listeners to the DOM elements. For example, if a particular DOM element is bound to a $scope property, the event listener that allows it to be updated with the the value of the $scope property is applied to the DOM element. The process of compilation starts with the root DOM element from which the AngularJS application was bootstrapped and traverses down the branches of the DOM using a depth-first traversal, compiling a parent first then its children all the way down to the leaf nodes.

After the controller function, the pre-link function executes. The pre-link function is mysterious to a lot of people. If you read much of the documentation on the Internet and in books, people write that this function is used only in rare circumstances and people will almost never need it. Those same explanations then fail to give an example of a situation where it could be used.

The post-link function is the function most commonly implemented in custom AngularJS directives. In this function, almost anything reasonable can be done. The DOM can be manipulated (for itself and child elements only), the $scope is available, the controller object for parent directives can be used, transclude functions can be run, etc. However, there are a few limitations. New directives cannot be added to the DOM because they will not be compiled. Additionally, all DOM manipulations must be done using DOM functions. Simply calling the html function on the DOM element and passing in new HTML will remove all of the event handlers added during the compile process. For example, these will not work as expected:

The code will not cause the HTML to change, but reassigning the string version of the DOM elements will remove all of the event handlers created during the compile process. Typically, the post-link function is used to wire up event handlers, $watches and $observes.

Once all of the post-link functions are executed, the $scope is applied to the compiled and linked DOM structure, and the AngularJS page comes alive.

Here is chart listing the purpose of each function, what is available when it executes, and best practices on how to use each function appropriately.

In this tutorial on AngularJS directives, we have learned about the purpose, execution order and overall capabilities and uses for each of the four directive functions: compile, controller, pre-link and post-link. Of the four functions, controller and post-link are the most commonly used but for more complex directives that need to have greater control of the DOM or need a private scope execution environment the compile and pre-link functions can be utilized.

Eric loves to write code in a high-paced and challenging environment with an emphasis on using best practices to develop high quality software that meets project requirements, budget, and schedule. He enjoys learning new technologies and sharing findings with his colleagues.

ss
Its very well explained and helpful.
Gopi Krishna
Hi Eric W. Greene, Thanks for sharing a great article on AngularJS!! I think there are lots of people who struggle to learn AngularJS. I have also tried my best to write on AngularJS about Top 10 Directives in AngularJS which will be helpful to people who are stepping into AngularJS. I will appreciate if you can take a few minutes to provide your feedback for the same, it would be a great help!! <a href="http://expertinangularjs.blogspot.in/2017/03/top-10-directives-in-angularjs.html">Top 10 Directives in AngularJS</a> Thanks a lot!!
Xavier Alexander
Haven't found any more clarifying and simplistic article on the custom directive's intriguing, and intimidating as well, concepts of Controller, Post-Link and Pre-Link. Thanks Eric.
Vikas K
This is one of the best read on directives. However it would be great if you can touch upon directive transclusion. I know transclusion in itself is a big topic but if you could cover basics then the reader would be aware of the concept. Nevertheless this post is awesome.
Erhan Gündoğan
great article, very informative. Thanks for sharing!
Philip
great blog. Thank you for posting this!
karthik339
I thought there would be some code examples that I can try out :) . Indeed a good article.
mocode
Great article man! Kudos for the deep dive. I think a lot of people needed that. Cheers,
Touhid Alam
Great article!
Kent Merrell
Concise and elegant overview. Good job.
Mkumar
Great article
Hal Smith Stevens
Great content and delivered with a rare clarity... Thanks!
Neha Nguyen
Complex forms with Advanced Directives in Angular JS ziplnk.com/angularjs-directive
Juukie14
Thanks for sharing!
Dwayne Crooks
I agree. This happened to me as well. It would have been nice if I didn't have to wait to get to my laptop to view the entire table.
Dwayne Crooks
Great post Eric! This is one of the most complete explanations of how the directive functions work that I've come across. Thanks for taking the time to share your knowledge.
movecodemove
Great post, Eric. One little nitpick, though: it would be great if your "Directive Function Chart" was as responsive as the rest of the page! I suppose that's possibly a note for the folks maintaining the Toptal blog. Maybe add a responsive/collapsible table component of some kind? Here's why: I loaded up the page on my phone to read during my subway ride and really wanted to read that directive function summary but, regardless of how I flipped and swiped my phone, Chrome just wouldn't let me read past the "DOM" column. Had to wait to get back to my PC to finally read the whole table. And, again, really great explanation of how directives work. I'll be making some code changes based on what I just learned from your post. Thanks!
GoldenHomer
Well, I learned a few new things today about directives. There's always something to learn with Angular.
Richard Rozsa
Great blog Eric. Thanks!
Francisco Claria
sweet :)
Anton Sozontov
Really good explanation! Finally I completely understand about how directives work. Thanks! :)
boriscy
Really nice article, good explanation about the order of the pre post compilation phases.
fernandez14
Quite good explanation of the dos and dont's of directives, I thought it was going to be something kinda like the bad stuff about using directives.
comments powered by Disqus