Vignes Aruljothi
Vignes specializes in web technologies and has many years of experience in building scalable applications using JavaScript and Node.js.
SHARE

Creating software does not end with writing good code. It gets completed when the software is deployed and able to handle the requests properly and when we can scale without hindering the performance and the cost of running it.

You’re probably thinking about how you have cloud computing to take care of all these things. “So what is this new serverless thing, Vignes?” 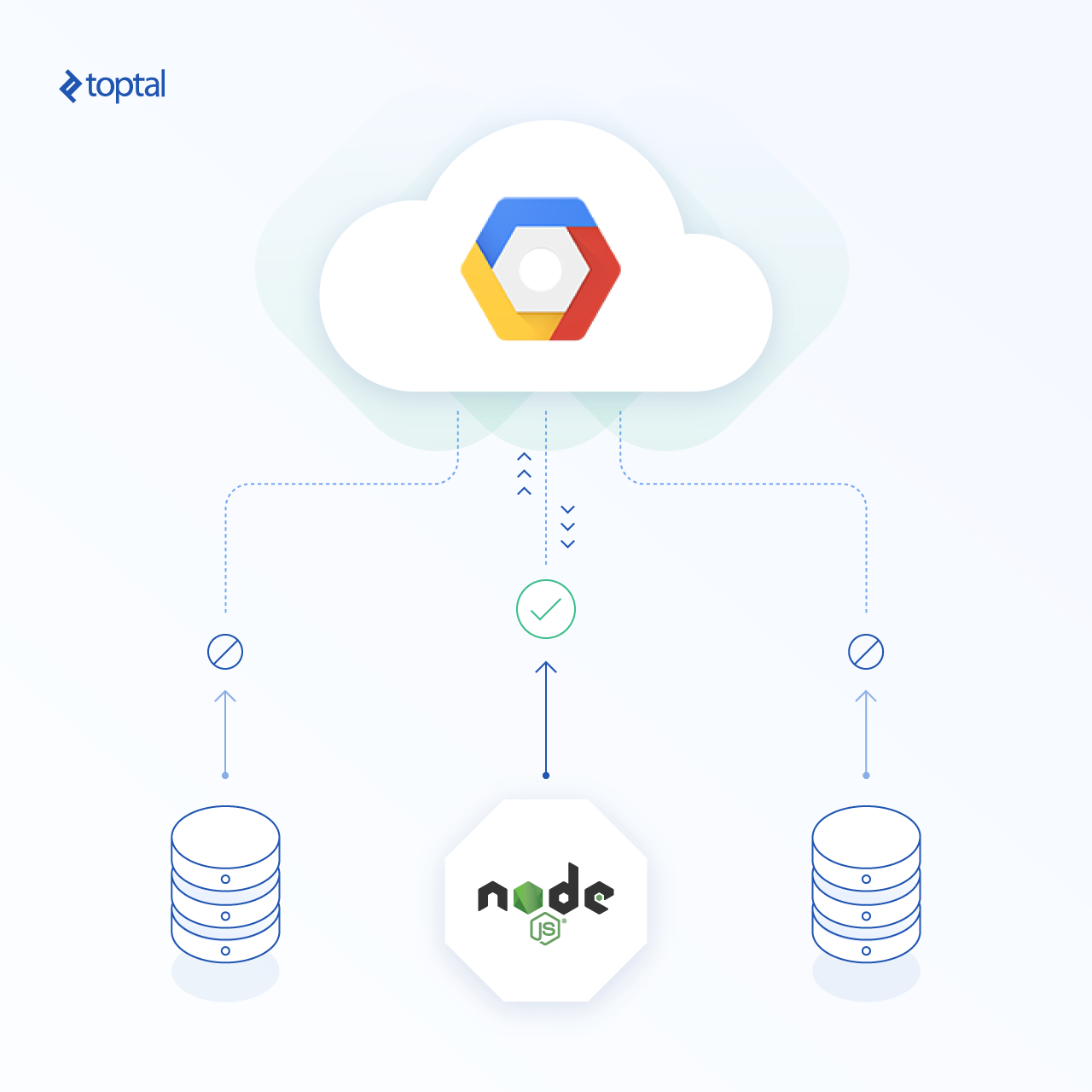 Serverless computing is an architecture style in which the code is executed in a cloud platform where we don’t need to worry about the hardware and software setup, security, performance, and CPU idle time costs. It’s an advancement of cloud computing that goes beyond infrastructure that abstracts the software environment as well. It means no configuration is required to run the code.

With serverless, the following will be your working style:

Our work is done! Now the platform provider will take care of incoming requests and scaling.

Serverless architecture is often coupled with a microservices style design. A microservice is a standalone part of big software that handles requests for one specific module. By creating microservices that can run in a serverless environment, it becomes easy to maintain the code and speed up deployments.

A serverless feature is often called a “back-end as a service” or “function as a service.” The number of serverless computing providers is beginning to increase. However, some of the traditional big players also provide serverless options, such as Amazon Web Services’ AWS Lambda Functions and Google Cloud’s Google Cloud Functions (GCF), the latter of which, while currently in beta, is what I am using. Although they work similarly, there a few important differences between them.

In this article, we will go through the process of implementing serverless code deployment using GCF. Google Cloud Functions is a lightweight, event-based, asynchronous compute solution that allows you to create small, single-purpose functions which respond to cloud events without the need to manage a server or a runtime environment.

GCF has three possible implementations separated based on triggers.

Google Cloud Functions does not require any additional special setup or installation. GCF ensures that the default node environment is set up and ready for execution. When a cloud function is created with HTTP as trigger, it provides a URL to trigger the function. Comparing with AWS Lambda, which uses an API gateway as a medium to communicate with it, Google Cloud Functions provides the URL immediately based on the projectID and region. 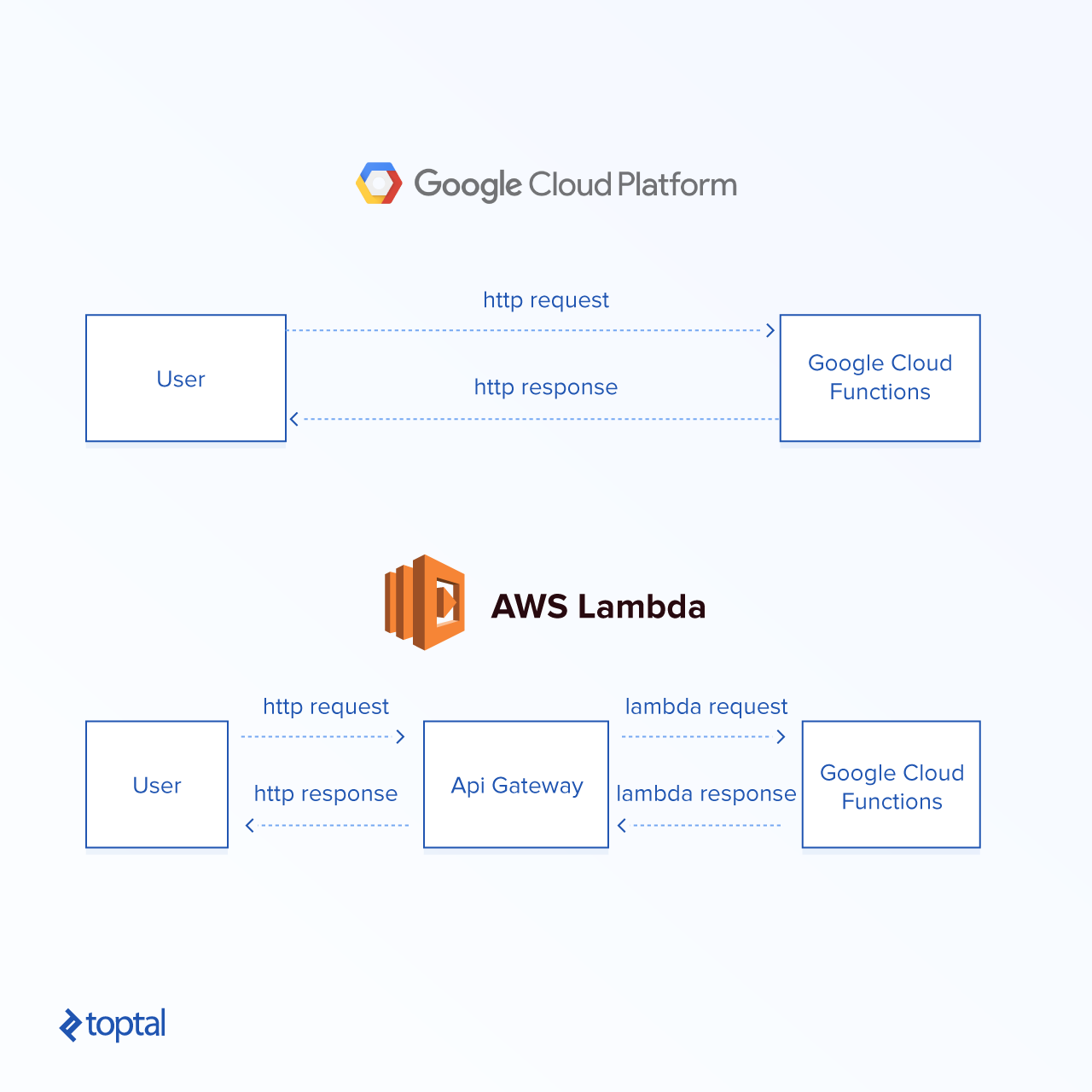 To make our code executable in GCF, we should wrap the code inside one single function. GCF will call that particular function whenever the trigger occurs. The possible ways to do this are uploading,

Any of the above methods will work.

GCF has a particular Node runtime version supported. Make sure the code is written to support that particular version. At the time of creating this post, GCF supports Node version v6.11.1.

To create a function, There are few options to consider.

To upload the code, simply do a copy paste of the code to create a function portal. For more than one file, zip the contents and upload the file. Make sure, in the case of a ZIP file, there should be either an index.js file or a package.json file with the main file mentioned.

Lets create a simple handler to return a 200 status and some message. Create a function and add the following code to the source. 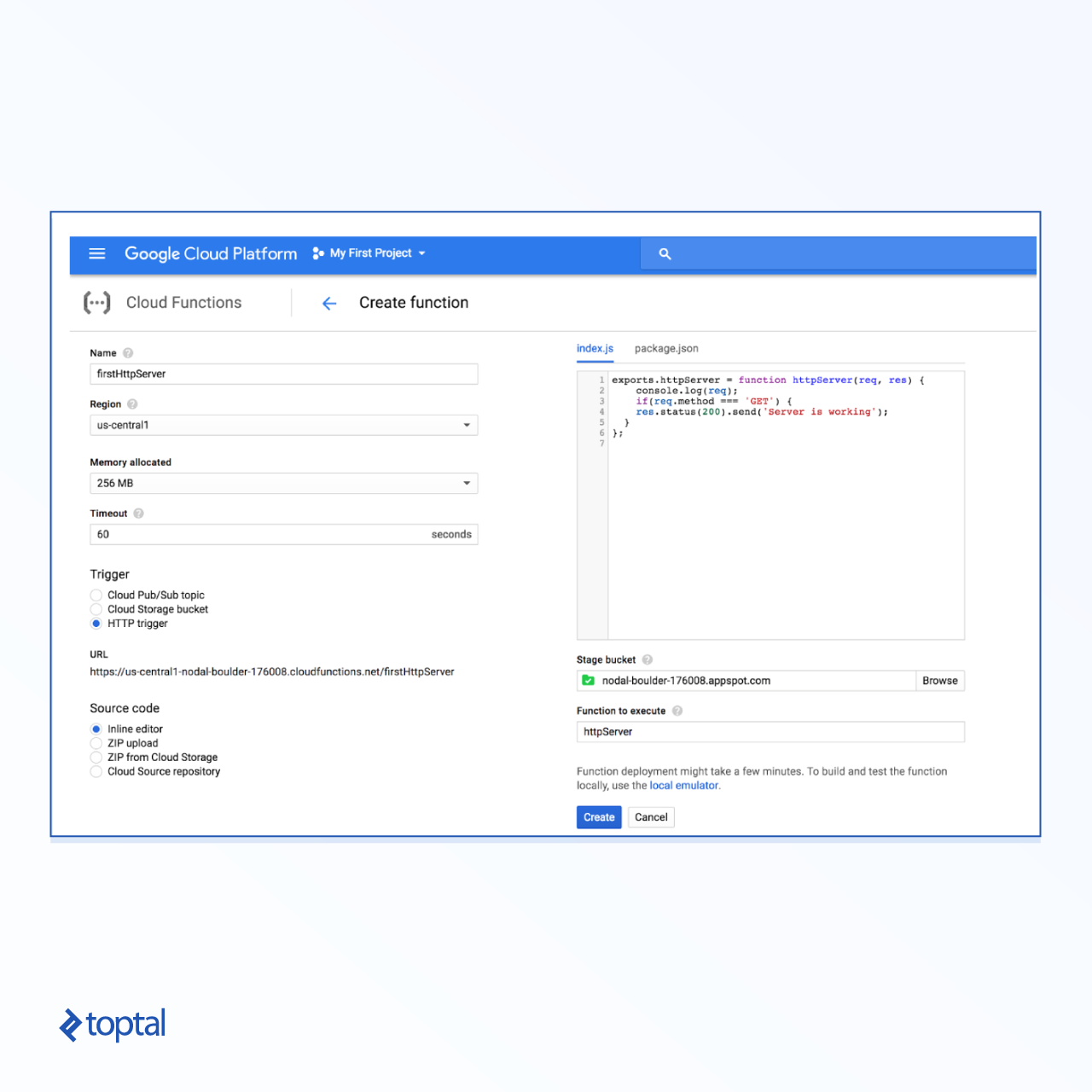 Once the function is created, Open the URL provided to trigger the function. It should respond like the following. 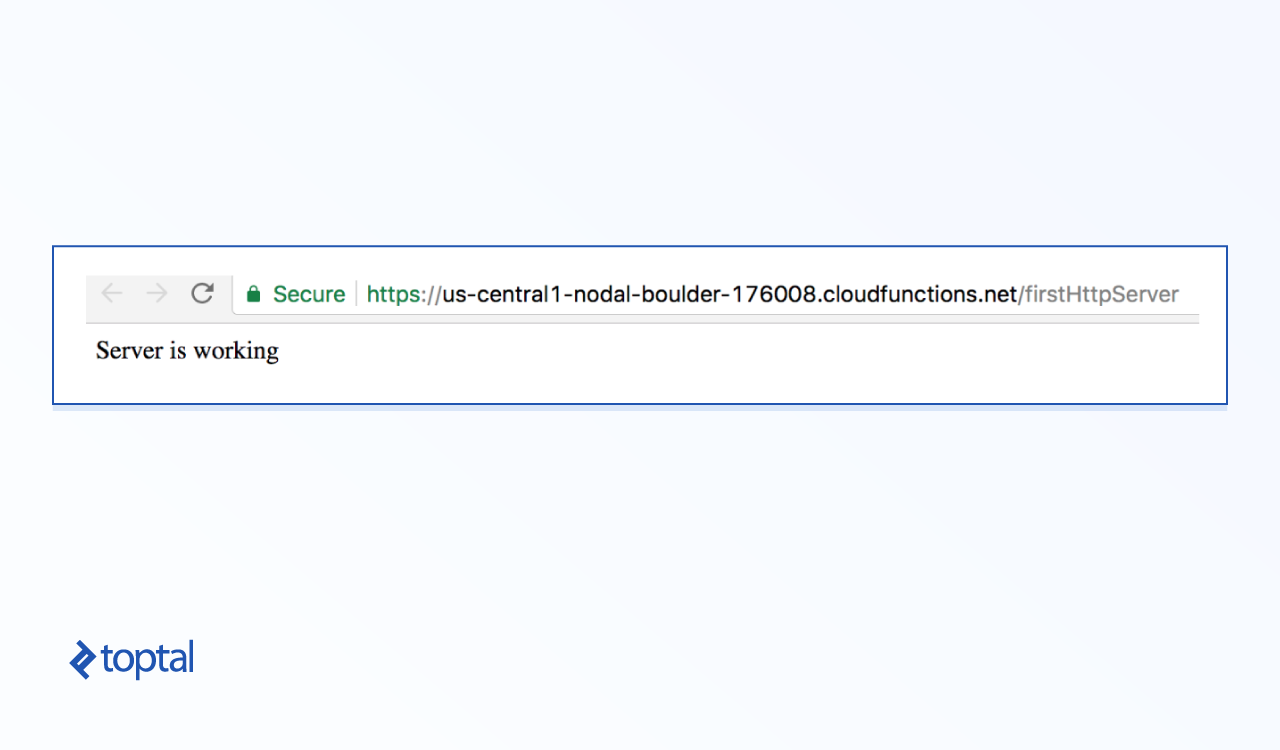 Now, let’s examine the req object in the logs. To view logs, GCF provides options right from the console. Click the the vertical dots and open the logs option. 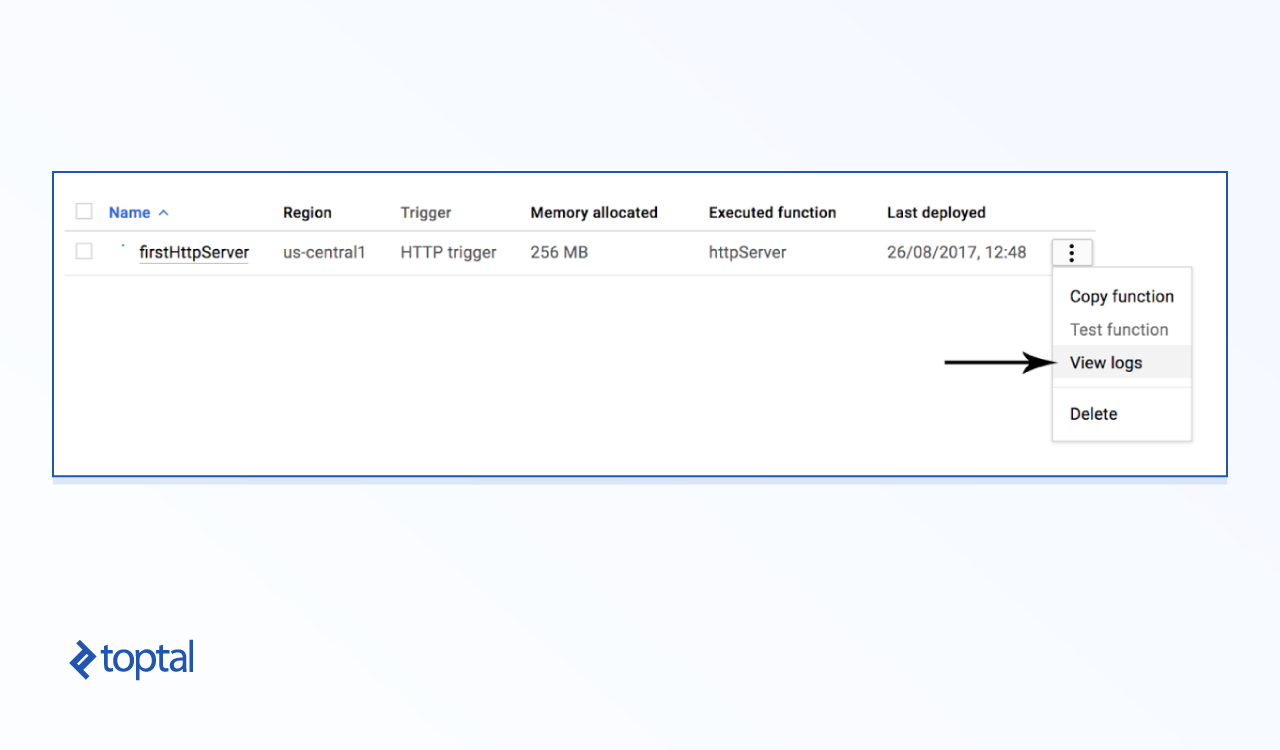 The following code is used to handle a simple GET & POST request for the /users route:

After updating, let’s test it in-browser now, but this time with /users at the end. 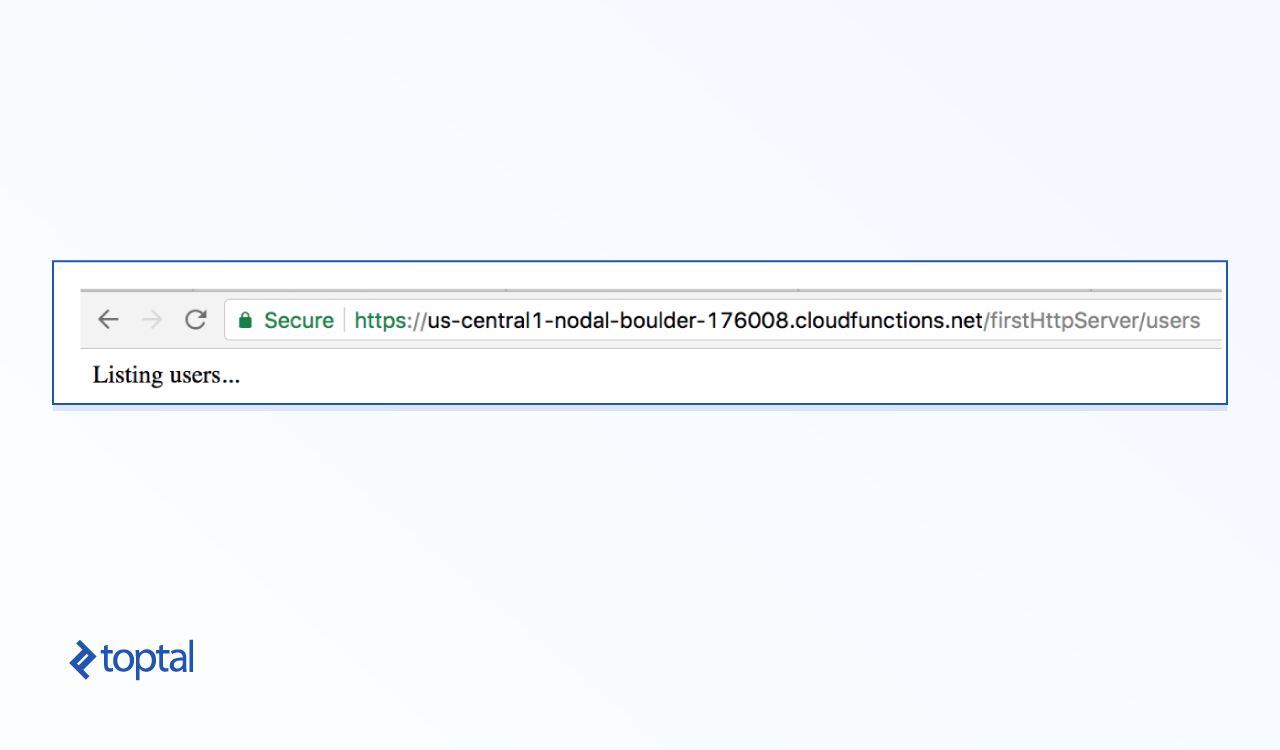 That’s cool. We created a basic HTTP server with routing.

If code were where the story ended, you wouldn’t be researching infrastructure options like serverless Node.js applications. Here’s a brief summary of how to take care of common tasks like deployment and debugging. Things Node.js developers already do for other applications.

Code for functions can be deployed in four ways.

The most convenient option is, obviously, deploying from a source repository.

While creating the function, Console provides the HTTP URL to trigger the function which is in the format: https://<region>-<project-id>.cloudfunctions.net/<function-name>

AWS Lambda’s function has cold start issues that makes the function execution take additional time to start up. Once started, the following executions will respond normally. This initial additional start-up time is referred as a cold start. Though we don’t have the official documentation for GCF related to this topic, the cold start issues didn’t show up during our testing.

GCF integrates with the Stackdriver Logging service in Google Cloud. All console logs and errors will get logged here, and it helps debug code that is deployed already.

The console provides options to test the function by passing a JSON as input. The function will be called with JSON as the input and the output will be displayed in the console. The request (input) and response is similar to the Express.js framework and can be unit tested during the development process itself. If you need a refresher on Node.js testing, check out A Node.js Guide to Actually Doing Integration Tests

Limitations and Next Steps

Using serverless functions has its own advantages, It also comes with limitations

Google Cloud Functions is maturing and improving a lot. It is still being improved and updated frequently, especially in the languages it can support. If you are planning to use Google Cloud functions, keep an eye on the changelogs to avoid any breaking changes in the implementation.

What is serverless computing?

Serverless computing is an architectural style in which a code module is executed on demand when triggered by an action, such as an HTTP request. Serverless architecture is often coupled with a microservices style design where each module contains only a single action.

What's the difference between AWS Lambda and Google Cloud Functions?

AWS Lambda and Google Cloud Functions (GCF) are both serverless computing providers. AWS Lambda provides support for more languages, triggers, and less maximum execution time. They work similarly but GCF is simpler to setup and use.

e viral
Hi, Just want to know this cloud function is good to upload bulk images on google cloud storage by passing image url. Please check link. https://stackoverflow.com/questions/53808901/how-to-download-store-image-file-inside-google-cloud-storage-bucket-by-just-send I have implemented these solution but problem with normal server, some time socket hangs or too much async request, its nor working perfectly. Here,Cloud function is the right choice.? if I will move my code on cloud function here.. will it solve my socket-hang or performance related issue? cloud function related codeExample: https://code-examples.net/en/q/2d22d42 Please update. Many thanks for this wonderful article.
comments powered by Disqus

Are you a Node.js developer?