A Guide to UTF-8 Encoding in PHP and MySQL

As a MySQL or PHP developer, once you step beyond the comfortable confines of English-only character sets, you quickly find yourself entangled in the wonderfully wacky world of UTF-8 encoding.

Unicode is a widely-used computing industry standard that defines a comprehensive mapping of unique numeric code values to the characters in most of today’s written character sets to aid with system interoperability and data interchange.

UTF-8 is a variable-width encoding that can represent every character in the Unicode character set. It was designed for backward compatibility with ASCII and to avoid the complications of endianness and byte order marks in UTF-16 and UTF-32. UTF-8 has become the dominant character encoding for the World Wide Web, accounting for more than half of all Web pages.

UTF-8 encodes each character using one to four bytes. The first 128 characters of Unicode correspond one-to-one with ASCII, making valid ASCII text also valid UTF-8-encoded text. It is for this reason that systems that are limited to use of the English character set are insulated from the complexities that can otherwise arise with UTF-8.

On a previous job, we began running into data encoding issues when displaying bios of artists from all over the world. It soon became apparent that there were problems with the stored data, as sometimes the data was correctly encoded and sometimes it was not.

This led programmers to implement a hodge-podge of patches, sometimes with JavaScript, sometimes with HTML charset meta tags, sometimes with PHP, and so on. Soon, we ended up with a list of 600,000 artist bios with double- or triple-encoded information, with data being stored in different ways depending on who programmed the feature or implemented the patch. A classical technical rat’s nest.

Indeed, navigating through UTF-8 data encoding issues can be a frustrating and hair-pulling experience. This post provides a concise cookbook for addressing these UTF-8 issues when working with PHP and MySQL in particular, based on practical experience and lessons learned (and with thanks, in part, to information discovered here and here along the way). 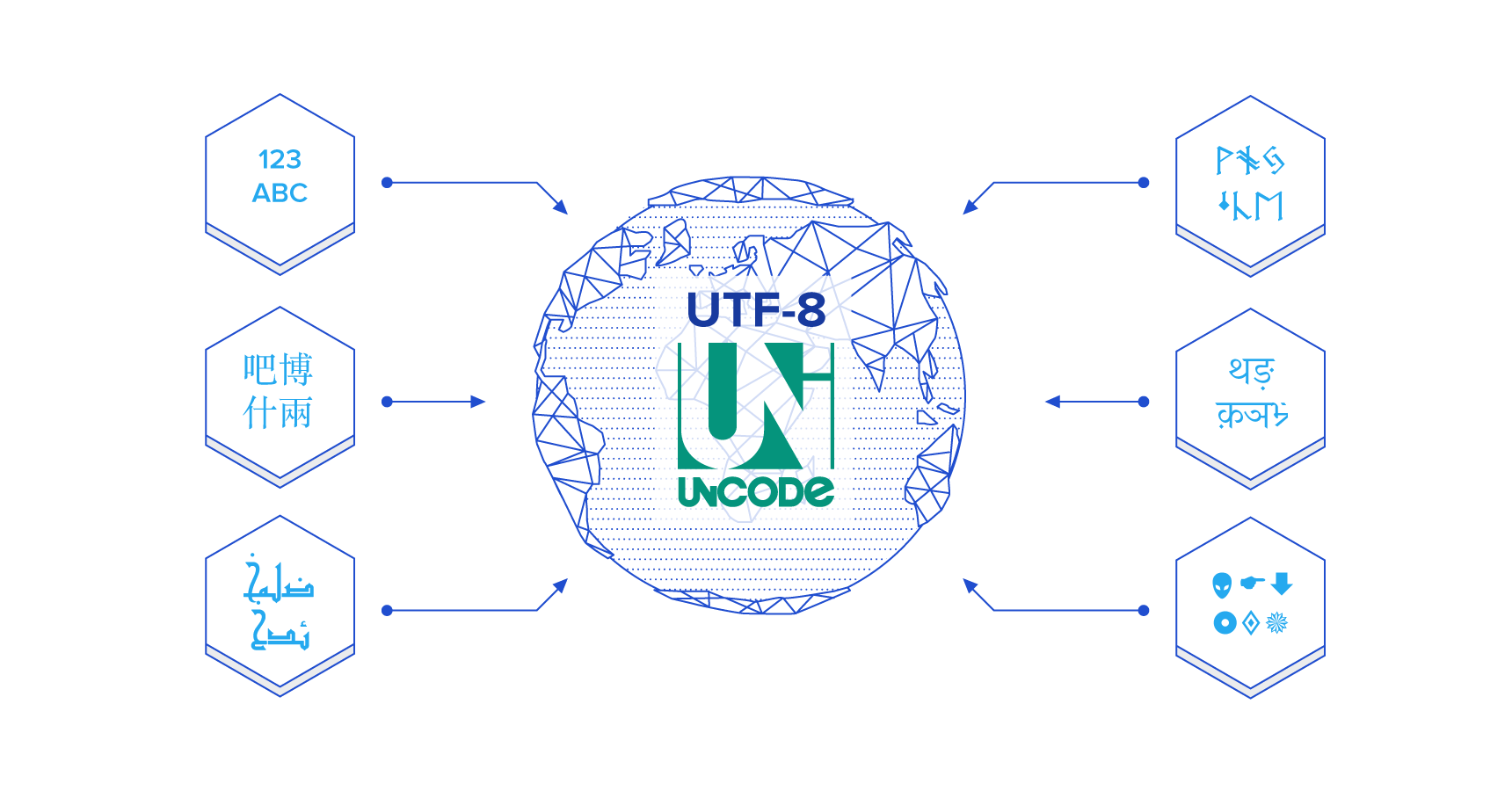 The first thing you need to do is to modify your php.ini file to use UTF-8 as the default character set:

(Note: You can subsequently use phpinfo() to verify that this has been set properly.)

OK cool, so now PHP and UTF-8 should work just fine together. Right?

Well, not exactly. In fact, not even close.

While this change will ensure that PHP always outputs UTF-8 as the character encoding (in browser response Content-type headers), you still need to make a number of modifications to your PHP code to make sure that it properly processes and generates UTF-8 characters.

To be sure that your PHP code plays well in the UTF-8 data encoding sandbox, here are the things you need to do:

On the MySQL/UTF-8 side of things, modifications to the my.ini file are required as follows:

MySQL UTF-8 Encoding – if you use Sphinx:

If you have an existing MySQL database that is already encoded in latin1, here’s how to convert the latin1 to UTF-8:

One other thing to remember and verify is that your source code files, resources files, and so on, are all being saved properly with UTF-8 data encoding. Otherwise, any “special” characters in these files may not be handled correctly.

In Netbeans, for example, you can right-click on your project, choose properties and then in “Sources” you will find the data encoding option (it usually defaults to UTF-8, but it’s worth checking).

Or in Windows Notepad, use the “Save As…” option in the File menu, and select the UTF-8 encoding option at the bottom of the dialog. (Note that the “Unicode” option that Notepad provides is actually UTF-16, so that’s not what you want.)

Although it can be somewhat tedious, taking the time to go through these steps to systematically address your MySQL and PHP UTF-8 data encoding issues can ultimately save you a great deal of time and grief. In the long run, this type of methodical approach is far superior to the all-too-common tendency to just keep patching the system.

This guide hopefully emphasizes the importance of taking the charset definition into consideration when setting up a project environment in the first place and working in a software project environment that properly accounts for character encoding in its manipulation of text and strings.

Related: Before Debugging PHP That’s Not Working, Consult This List of the 10 Most Common Mistakes That PHP Developers Make

What is UTF-8 character set?

Defined by the Unicode standard, UTF-8 is an 8-bit character encoding capable of storing ay Unicode character. It is backwards compatible with ASCII.

What does UTF-8 stand for?

UTF is short for Unicode Transformation Format, while the “8” suffix denotes the use of 8-bit blocks to represent characters.

How to insert Unicode characters in MySQL using PHP?

In order to insert Unicode characters in MySQL, you need to create a table with Unicode support, select the appropriate encoding/collation settings, and specify the charset in the MySQL connection. Then, you can proceed and employ PHP code to insert Unicode as you please.

Francisco is a full-stack engineer currently focused on hybrid apps (Ionic/Cordova) who has extensive experience in innovative solutions, Arduino, API/REST back-ends, distributed data manipulation systems, web applications, and UI/UX. He maintains a strong focus on sustainability and performance in his work and in the products he develops.