Wojciech Dobry
Wojciech is a product designer and web designer with 8 years of experience. He’s passionate about typography and sound design.
SHARE
Read the Spanish

As designers, we rarely work as a one-man army. Instead, we work in tandem with other designers, programmers, and even customers. This presents a rather unique problem. Having several different versions of the same document—for your colleagues, the developers, and clients—is a real inconvenience.

But wait. What if there were a tool that could allow you to work with different stakeholders in real time? Luckily, there is. In this article, I’ll show you why you should consider the Figma app as the ultimate tool for collaboration between developers, programmers, and customers.

First of all, cast your mind back. Remember the pure excitement when Google first launched G Suite Create? The ability to have many people working on the same document at the same time was a serious game changer. From that moment on, teams could collaborate by writing texts, analyzing data in spreadsheets, or creating presentations. Well, Figma is essentially G Suite Create for the design world.

Collaboration in the Figma App

To figure out whether Figma was the right collaboration tool for me, I ran a test of my own. I asked my colleague to help me create an interface for a new project I was working on. But, instead of going through the usual back-and-forth, we used the Figma platform. The results were astounding. I simply sent the project link across and, in mere seconds, I saw a friend’s cursor appear on my screen:

I then used the dedicated tools on the Figma app to swiftly give my colleague a project brief. I was surprised to find that the system was super intuitive. Literally, a moment after I sent the brief, I saw my colleague create the screens for which I’d asked:

This freed up my time so I could start the next stage of the project. Since the work was moving forward at such an extraordinary pace, I decided to create a component that we would then use on multiple screens:

To my amazement, as soon as I created a sketch of the button and labeled it as a component, my colleague was able to paste it into other screens:

Here’s where the real magic began! We started working simultaneously. I would change the appearance of the component while my colleague adapted it on the next screen:

Next, my colleague started putting new images on the screens, while I jumped straight into the prototyping step. It was a real time-saver. Take a look how easily you can create an interactive prototype in the Figma app:

You may be wondering what my colleague did while I was prototyping. Well, not a moment was wasted. He used this period to add informative comments on all the screens, so that our client could easily understand the design:

The final step was to pass the project on to the development team. While I had my doubts about compatibility here, I was pleasantly surprised. Luckily, the team didn’t need to use any third party software or export the file from Figma to be able to work on it:

The project was so quick. From the moment I sent my colleague a link, it took about ten minutes to complete. We even used Skype to talk things through as we worked. The ability to focus on different elements of the design saved us so much time. What’s more, Figma made the collaboration as straightforward as could be. I truly enjoyed the entire process. 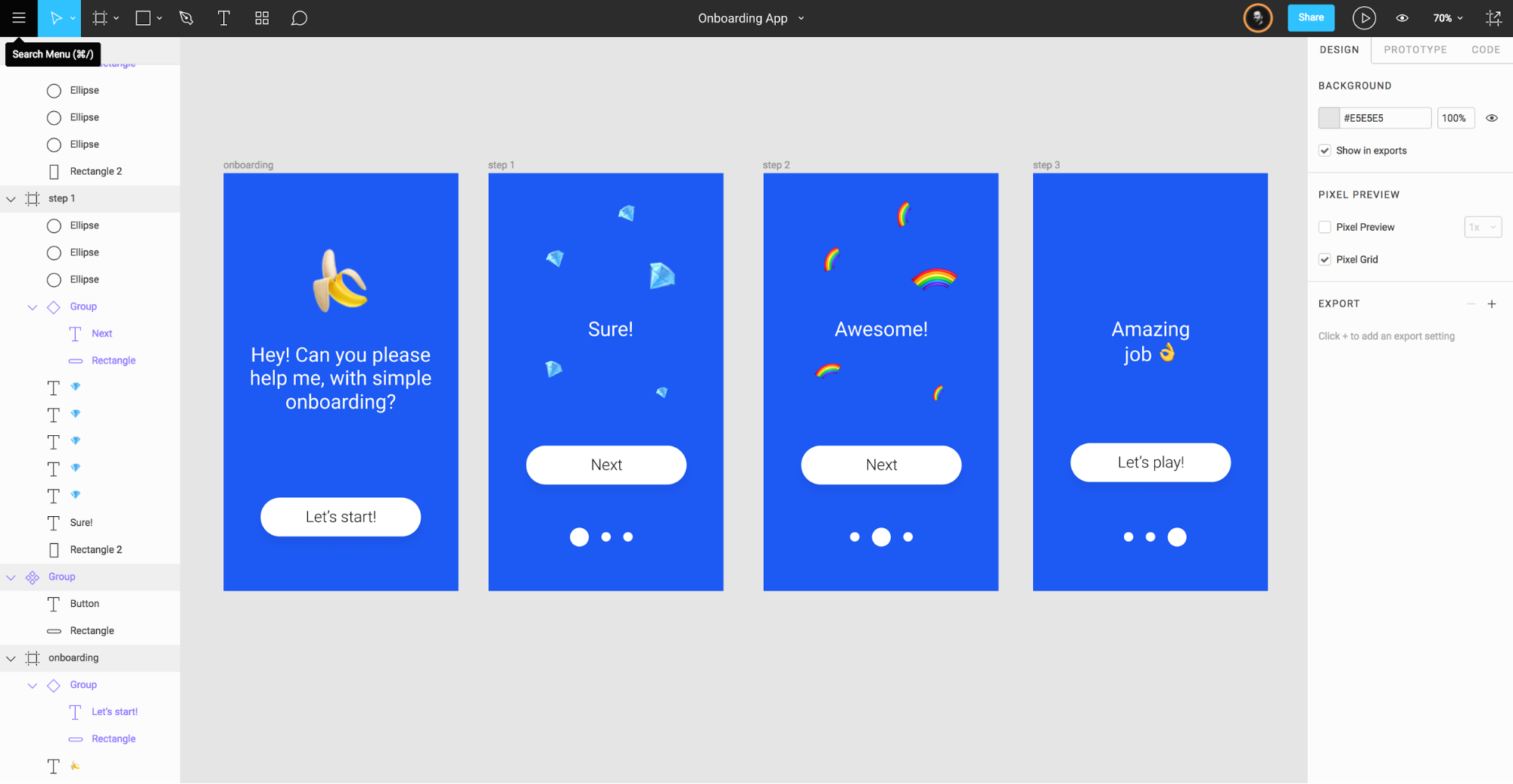 The Figma app marks a new age in the world of design. Before its release, there was no tool out there that allowed designers to collaborate in real-time. It’s super easy to understand, intuitive, and fun to use. I’d go as far as to say that it completely transforms the way in which you can work with your colleagues and clients. With that in mind, next time you’re collaborating on a design project, do yourself a favor and try Figma yourself. I promise you won’t regret it!