Matt Dixon
As a sales and finance specialist, Matt has raised over $30m for his businesses, in addition to founding his own wellness company.
SHARE

The global energy market fundamentally enables the modern economy to function. Soon, the processes enabling energy commodities to flow from source to customer may be transformed by blockchain energy applications. Recent partnerships between leading multinational oil, gas and utility companies and blockchain innovators foreshadow a new frontier for energy.

In the following article we explore two fascinating applications of blockchain to real-world business challenges in energy. Through these examples, we revisit themes from our first blockchain application article, including: 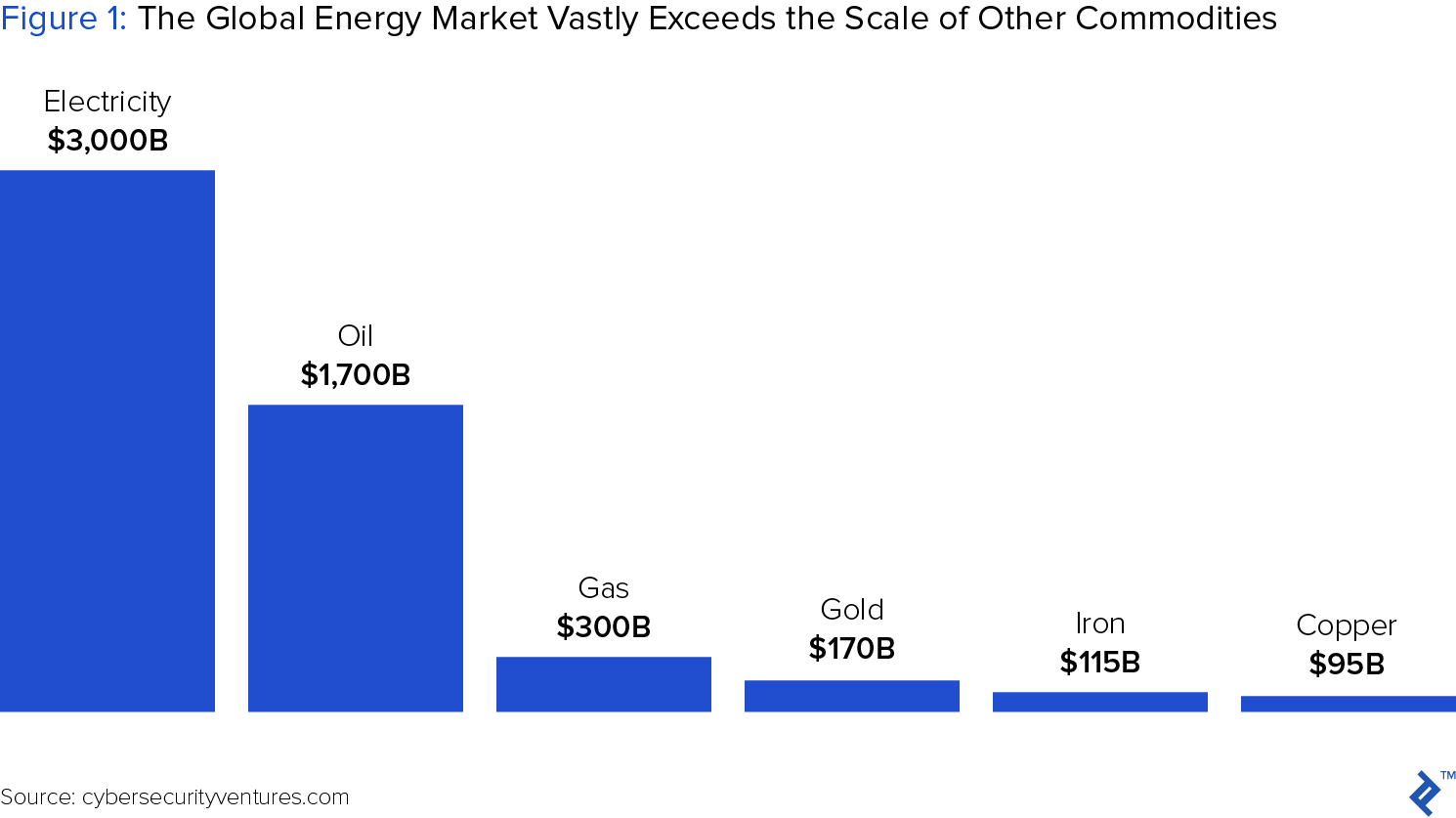 Blockchain Background and Relevance to Energy

As with other highly-regulated, transaction-intensive industries such as banking, structural elements that underpin the energy industry are well-suited for blockchain application.

Early blockchain applications in energy combine aspects of both use cases, as they target supply chain efficiency and multiparty financial transactions. Similar to most enterprise blockchain applications, those covered in this article rely on permissioned ledgers, which differ fundamentally from popular public blockchains, such as Bitcoin, because they are not accessible to everyone. Instead, a designated administrator dictates user access and information rights.

In an approach similar to consortia, which we also covered in our first article, blockchain innovators are organizing groups of industry participants with common interests, and orchestrating efforts to build new products that will replace underperforming legacy systems. 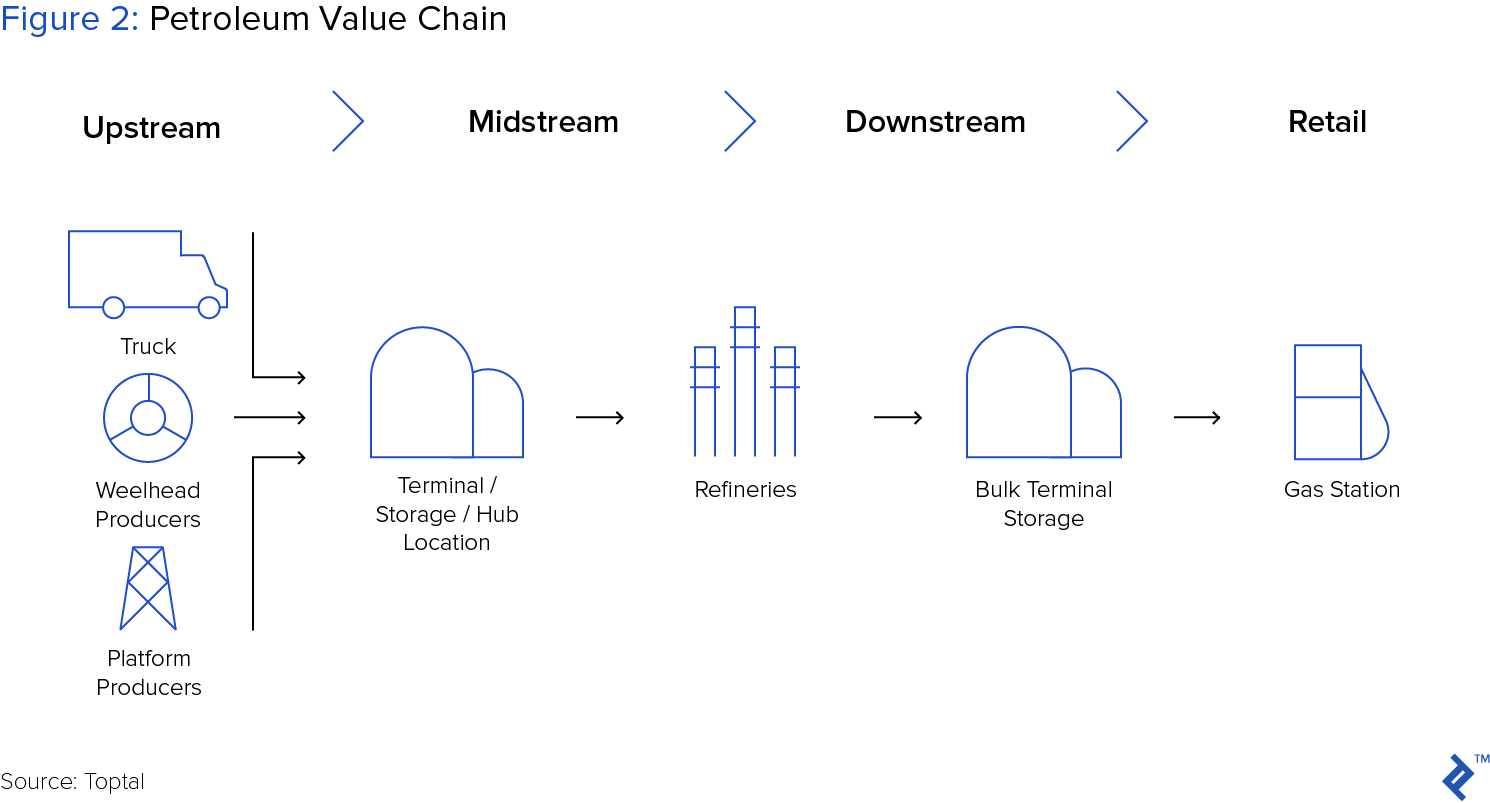 While the global market for ETRM software generates a relatively modest $1 billion of annual revenue, its impact is outsized, influencing trillions of dollars of energy resources annually. With global oil & natural gas exports, alone - a conservative estimate of the total notional value impacted - ETRM directed $855 billion of commodity flow in 2016.

Current ETRMs are siloed and inefficient

To illustrate the landscape in which ETRM functions, its current limitations, and the opportunity for blockchain, a brief walk through a typical commodity trade is helpful. At a high level, the trade culminates in three forms of settlement between two parties:

In a simplified energy trade, as highlighted by a recent article from the Cleantech Group, Buyer and Seller initiate the transaction. Both parties confirm the commodity price by consulting the relevant price exchange, for example the CME for West Texas Intermediate crude oil.

Then, working through an online exchange or a broker, Buyer initiates the purchase. After settling the trade, both Buyer and Seller enter transaction details into their ETRM systems, then send identical information to their broker and each other, confirming the trade and ensuring information matches. The data reconciliation step often relies on emailed spreadsheets, or some other manual cross-check, which increases transaction time and vulnerability to human error. 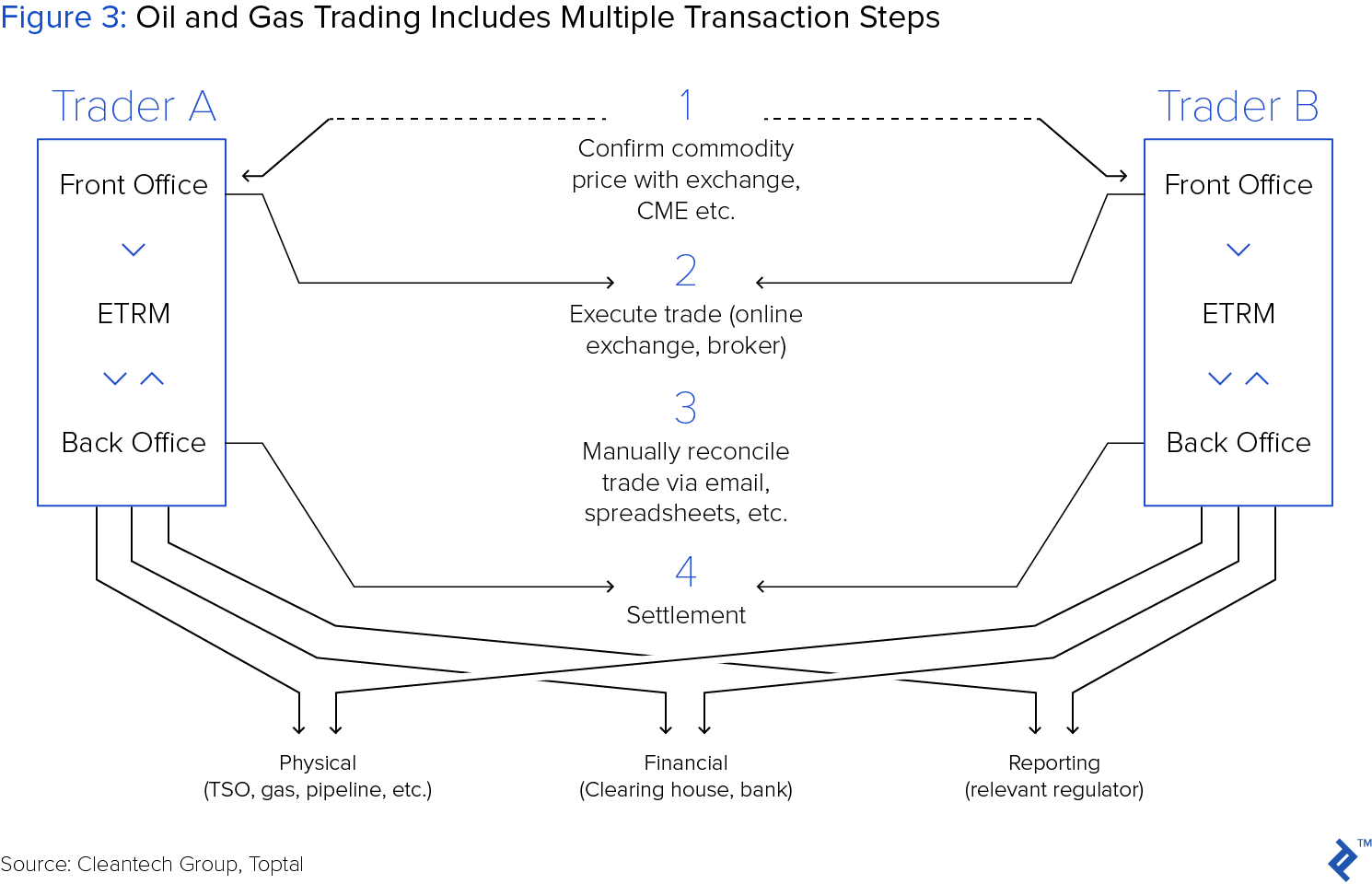 With the above in mind, industry participants have started turning to blockchain as a way to improve and render more efficient the ETRM systems orchestrating trading activity. Accordingly, several promising pilots are underway to explore how blockchain applications can overhaul these systems.

To optimize for these needs, BTL built a proprietary blockchain. Though similar in structure to popular versions such as bitcoin and Ethereum, Interbit is a unique, permissioned ledger. By comparison, a blockchain such as Ethereum would put all customer data in one place, whereas Interbit creates a unique blockchain for each bilateral customer relationship. Each of these blockchains, in turn, connects to a master blockchain. As a result, the Interbit structure creates a more flexible permissioned system, in which BTL grants information access solely to transacting counterparties.

BTL also optimized Interbit for speed, recognizing unique scalability needs of its customers. Unlike bitcoin or Ethereum, which can only process 7 and 15 transactions, respectively, Interbit can process 100,000+ transactions per second. 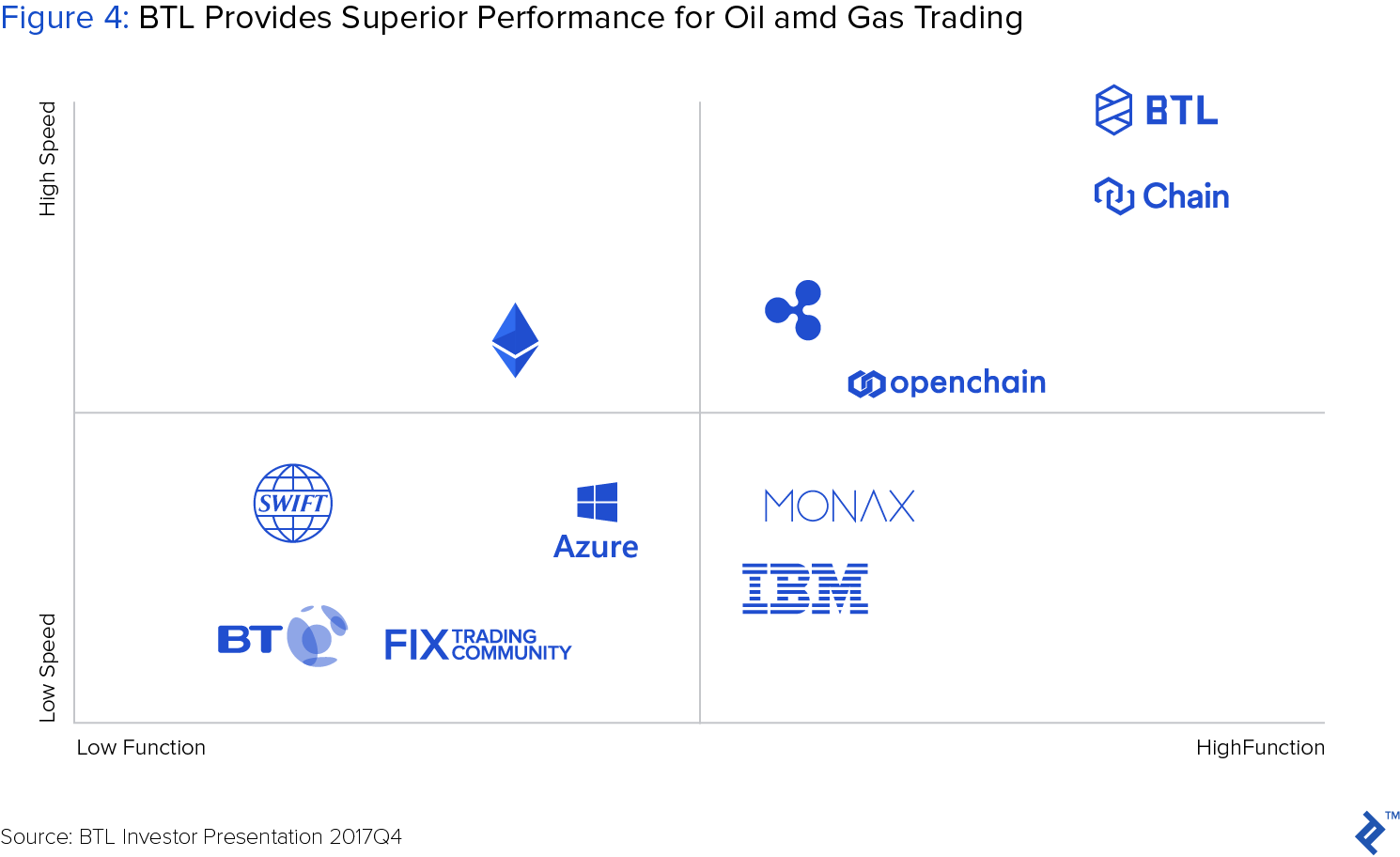 BTL first targeted gas trading, where legacy process relied on cumbersome document trading. As customary practice, buyers generate a nomination - a request for a physical quantity, at a specified price, delivered to a specified point - to the upstream seller. The nomination is often emailed as an attached PDF to all operators participating in the transaction. Once these parties receive the nomination, they enter the data into their ETRM software. However, nominations are often updated, requiring all participants to subsequently search through the updated PDF to locate new information and repeat the manual data entry process.

Although notionally simple, the manual reconciliation process is practically complex and costly, requiring multiple days or months to complete. Further, transaction time increases when trading parties are not subsidiaries within the same company. Long settlement times translate to higher cost, as counterparties must allocate trade collateral in the form of committed capital, which is only freed up once the trade is settled.

Enter Blockchain. More than improving the reconciliation process, it entirely eliminates it. According to BTL:

“Reconciliation is baked into the process of adding data to the chain. Data entry errors are eliminated, as entries inconsistent with information held by counterparties will not be validated and added to the record… A transparent and synchronized distributed ledger provides immediate settlement and an authoritative record of gas estimates, when they were provided, and who signed off on them.”

“If blockchain can expedite the cumbersome work streams of energy trading, the impact on the industry will be profound. Further, it can significantly de-risk cross border commodity transactions by potentially standardizing authentication with counterparties in emerging markets.”

While blockchain holds great potential to improve ETRM systems, transitioning to this new technology is complex and should be done carefully. Continuing with the BTL example, the company pursued a measured approach over the past 2 years, launching a series of pilot programs with diverse global energy companies.

With each successive pilot, BTL built on prior success, expanding scope and the number of innovation partners. In a strategy reminiscent of blockchain consortia covered in our first article, BTL efforts orchestrated strategic objectives from multiple parties with a shared interest - in this case, more efficient energy trading. 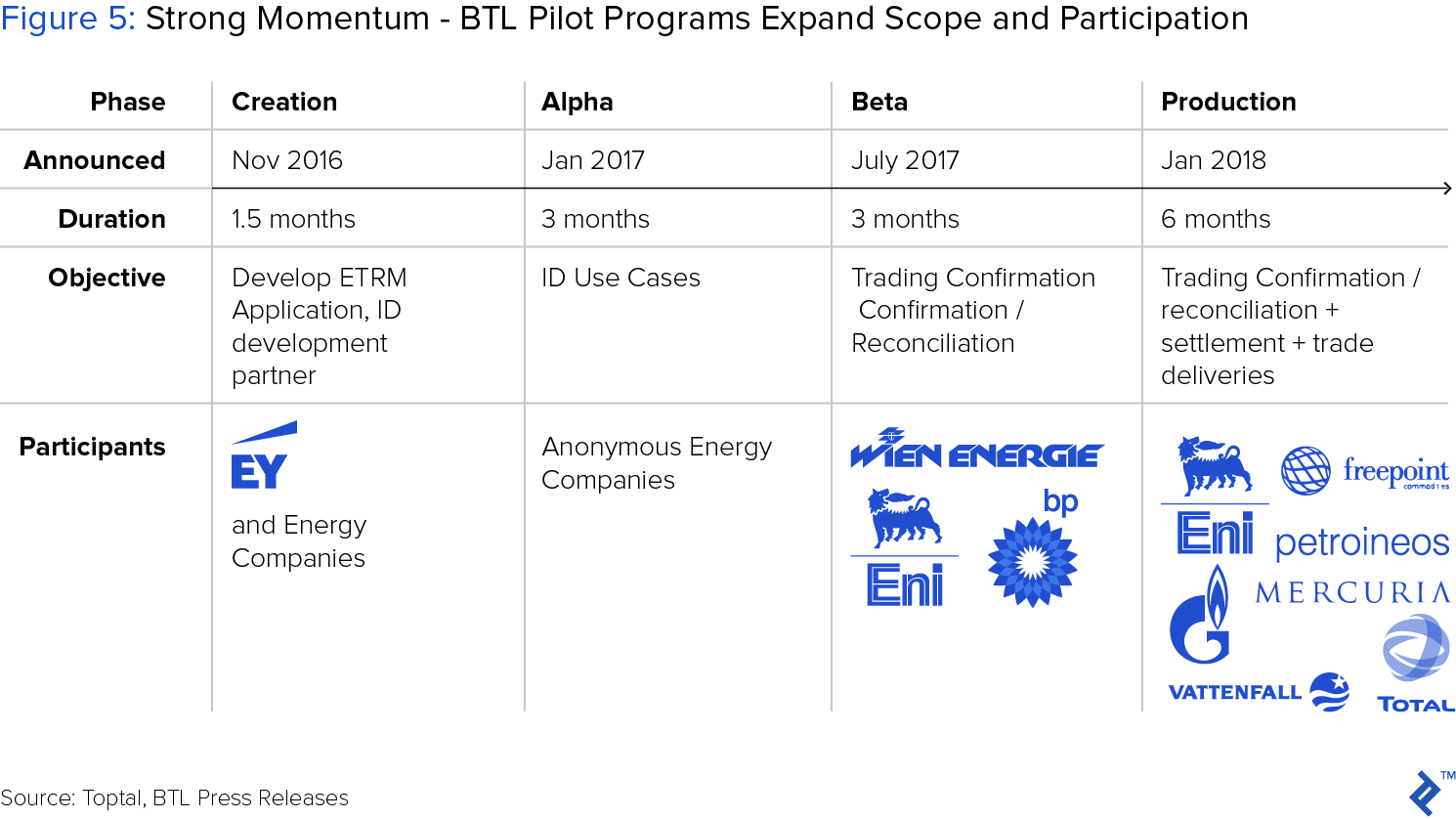 “Following our experience during the European energy pilot, we look forward to expanding the scope to enable straight through processing through the whole settlement process as well as bringing wider participation from the industry.”

The theme of building upon early success, particularly by drawing more industry partners, echoes the trajectory of blockchain developments in other industries, such as the food supply chain. In each vertical, as additional partners contribute resources and product feedback, the solutions under development will undoubtedly strengthen.

In addition to oil & gas, the electricity market holds great potential for blockchain applications. Renewable energy, in particular, introduces market dynamics that are well-suited for the distributed ledger. As a growing electricity source, renewables should increasingly influence utilities and customers to adopt blockchain-based solutions that improve market efficiency.

Although renewables only account for about 10% of global electricity generated, they are rapidly displacing fossil fuel generation. In 2017, new investment in renewables accounted for more than 50% of new generation capacity added.

As the electricity generation mix becomes increasingly distributed, particularly in the form of residential and small commercial solar installations, new opportunities arise for electricity supply and demand to meet. With growing networks of distributed generation and net metering capability, consumers now have the ability to more directly monitor and control their power consumption and production.

As with oil and gas, electricity trading poses a compelling use case for blockchain. Similarly, electricity trading occurs between a variety of counterparties who stand to benefit from a shared ledger of trading activity. The burgeoning peer-to-peer energy market is already deploying blockchain to improve transaction economics for buyers and sellers. 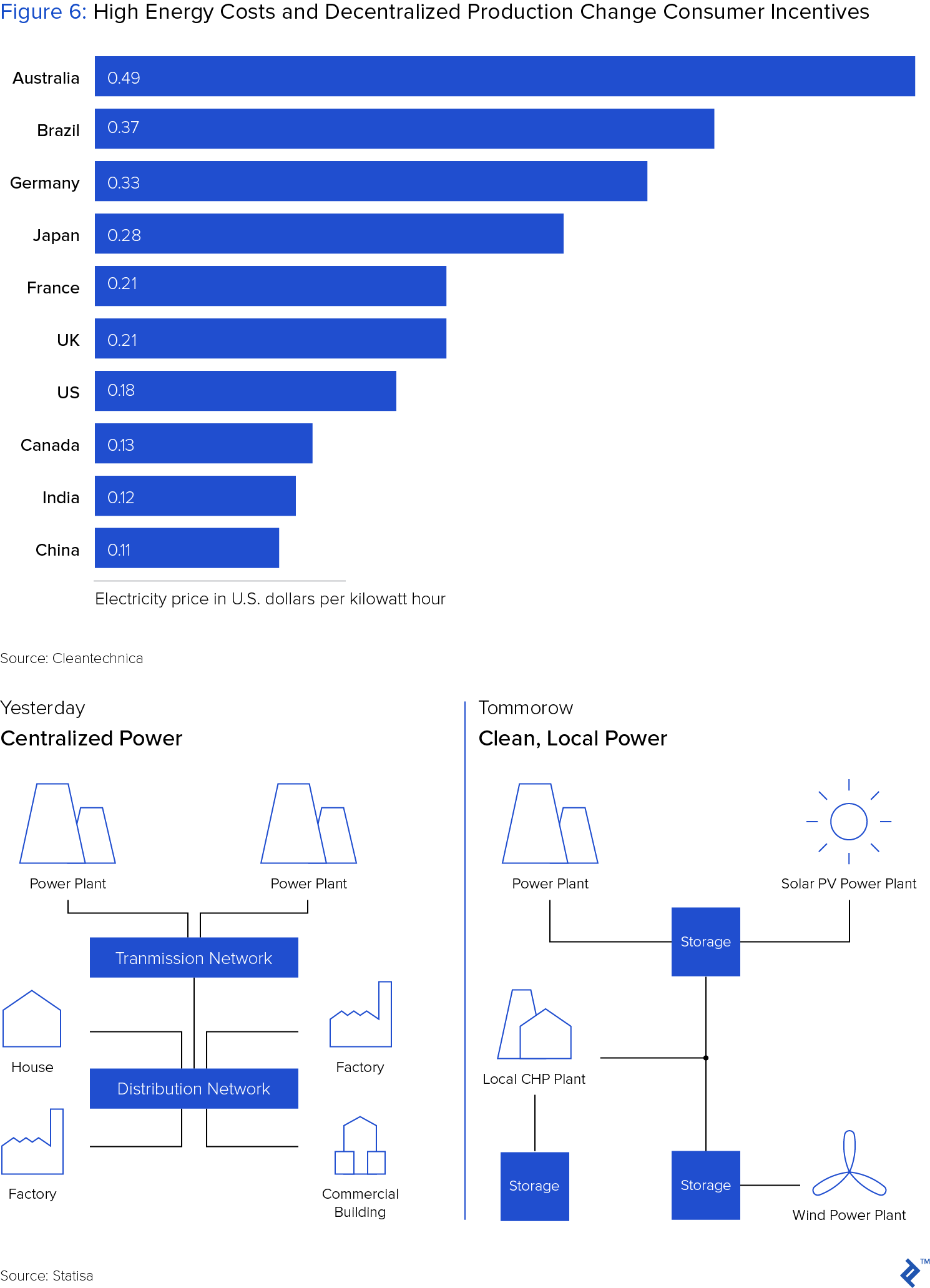 Within the Australian electricity market, a blockchain startup called Power Ledger identified an unmet opportunity at the intersection of high electricity prices, increasing distributed solar energy, and unattractive options for consumers to sell surplus energy. To serve the unmet need, they developed an eponymous technology, a blockchain-based peer-to-peer energy trading platform that enables consumers to sell surplus solar energy to neighbors without a middleman.

“Consumers don’t like selling their power back to the retailer and buying it back at a higher price. … Presently, if you’ve got surplus solar electricity you sell it back for a low feed-in tariff and buy it back (from the grid) for a high rate.”

Supporting the Power Ledger approach, both the the Australian government and one of Australia’s largest utilities, Origin Energy, signed on to sponsor multiple pilot projects. The former awarded Power Ledger an $8 million grant to deploy Interbit to monitor energy and water usage in the city of Fremantle, providing the “transactional layer” to a consortium of academic, infrastructure and technology partners. In the Origin Energy pilot, Power Ledger connected customers who wanted to either sell or buy excess electricity.

In both cases, the Power Ledger blockchain digitized electricity, allowing consumers to trade it in the form of tokens called Sparkz. A sparkz represents a specified amount of energy, pegged 1:1 to the local currency, and is redeemable from the sponsoring utility or relevant authority.

For example, electricity customers could trade one kilowatt-hour of solar energy for perhaps, 15 Sparkz, which would be redeemable from Origin for $A0.15 Australian dollars. A seller who received Sparkz for energy sold to her neighbor could redeem Sparkz for currency from Origin.

“As somebody purchases or consumes electricity, [the trade] is recorded on the blockchain and those two pieces of information form the transaction for which Sparkz are transferred… The actual recording of the electricity is the movement of Sparkz from the buyer’s wallet to the seller’s wallet.” 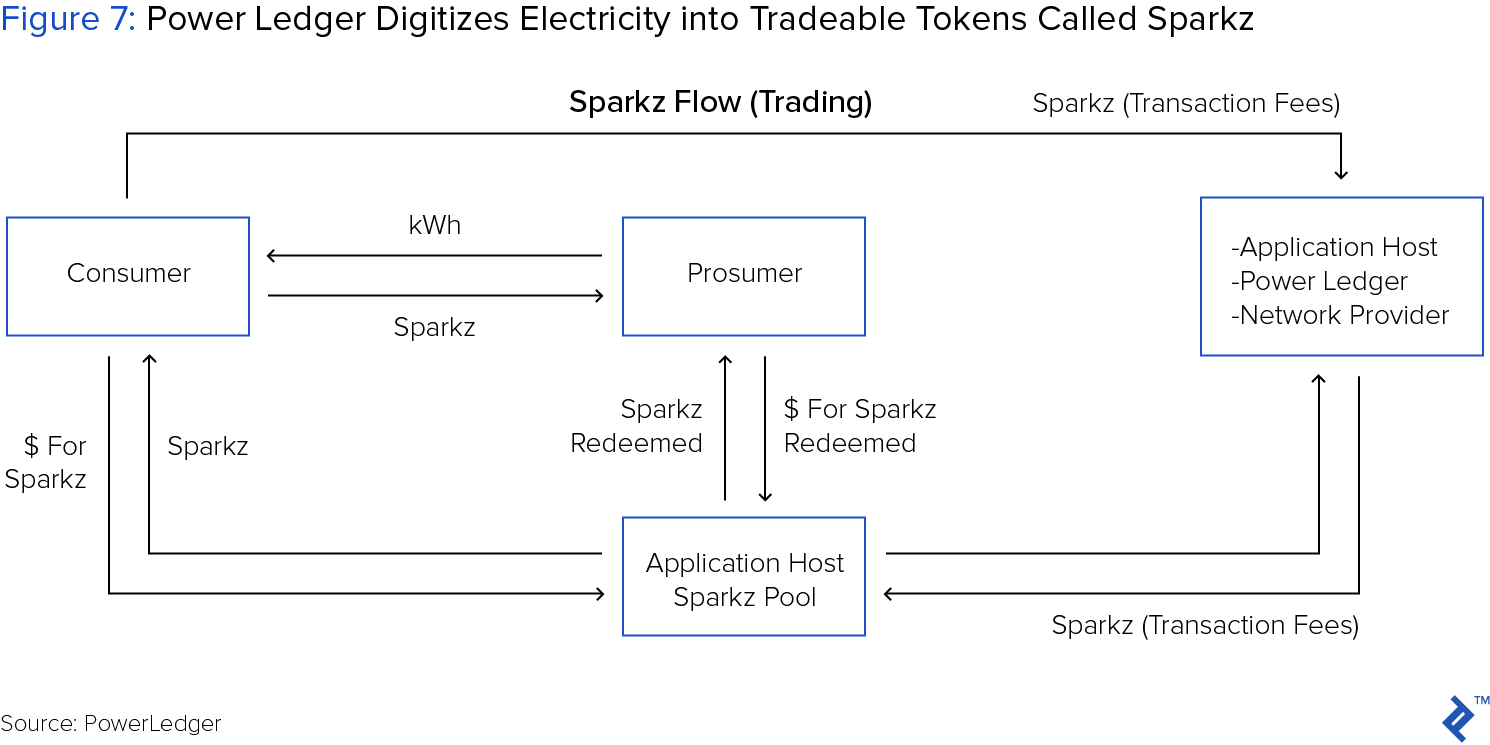 “While it’s still fairly early days for this technology, we are keen to explore the potential benefits that peer-to-peer energy trading could offer our customers. Power Ledger is one of a number of emerging technologies we’re currently exploring, which we believe could help us meet the changing needs of our customers.”

Based on savings data collected from early pilots, Power Ledger stands to massively impact Australian consumers. Results from a 2016 pilot suggest households could save $A600 annually - nearly 40% of the average 2017 bill - using Power Ledger.

And while blockchain should relieve the byzantine document flows, Dunand acknowledged another imminent challenge: the legal obstacles of getting governing authorities to recognize blockchain. As such, as more industry leaders follow suit and invest resources into pilots, they should match investment in R&D with comparable effort in educating regulators, helping them comprehend - and ultimately endorse - the discoveries of their exploratory endeavors.

Rollin Shultz
A lot of fancy buzzwords and ideas here, but it is all still an extension of an old model. That model being to keep energy production in the hands of a few corporations who use large scale power plants which waste billions of joules of energy through transmission and distribution. Just think how much in resources could be saved if energy production was conducted on a model of individual site production. Each homeowner being responsible for their own production. It wouldn't work for people living in cities, but then cities would be better used as strictly places to conduct commerce not for living unhealthy lifestyles of cramped living spaces. People who live in cities will never experience natural living, caring for animals, or growing food in a garden. They live like mice in cages. Renewable energy can work, but not on the old mass production and transmission model.
Sanjaye Savant
welcome to the future of transactions....
Matt Dixon
Yes, the opportunity to reduce reliance on outdated, inefficient transmissions is real. Hopefully increasing distributed generation, coupled with innovative methods for matching local supply and demand - such as blockchain-powered P2P trading - will accelerate the renewable trend.
all max
very nice article Matt...your linkedin profile doesnt seems to be working.
Bits N' Blocks
Various electricity companies are also coming up with innovative solutions using blockchain technologies for power trading and power exchange. In Germany, it's a win-win situation for power companies and consumers, where they apply blockchain to trade and decide the energy supplier. both the sides have reported to save around 10% in the annual energy bills. <a href="<b>https://bitsnblocks.co</b>"></a>
comments powered by Disqus