Breanden Beneschott, co-founder and COO of Toptal, lays out a cultural framework for achieving and sustaining hypergrowth—sharing concepts that have steered Toptal clients to double- and triple-digit growth over the last seven years.

Breanden Beneschott
As the co-founder of Toptal, Breandan was instrumental in the creation of Toptal’s. He helped set up our infrastructure in 40+ countries.
SHARE

Hypergrowth is a phenomenon with near-mythical status in Silicon Valley and the startup world, bringing to mind images of founders showered in PR and venture funding as their companies grow users and revenue by double-digit percentages every month.

Hypergrowth emerges from an organizational mindset - a culture that some teams have and others simply lack.

According to the World Economic Forum, companies experiencing “normal growth” exhibit a compound annual growth rate (CAGR) of 20% or below. On the other hand, companies experiencing “hypergrowth” boast a CAGR in excess of 40%. As the technology and best practices that enable hypergrowth propagate to new markets, businesses in a variety of sectors and stages have the opportunity to scale fast and pursue once-unthinkable growth goals.

But many executives don’t appreciate the fact that hypergrowth is a double-edged sword. When ignited and managed unsustainably by leaders who lack experience or want a quick flip, hypergrowth can be a fast way to destroy long-term value. On the other hand, founders and executives who understand how to cultivate sustainable hypergrowth reap substantial rewards.

As the co-founder and COO of a company that has grown to nine-figure revenues within the last several years, I’ve learned that hypergrowth emerges from an organizational mindset—a culture that some teams have and others simply lack. In this article, we’ll discuss the cultural prerequisites for a team to enter the hypergrowth phase and thrive within it.

The CAGR benchmarks that define hypergrowth should be contextualized by considering the size of the organization in question. Startups need to achieve a growth rate in the hundreds of percent year-over-year just to survive early on. The label of hypergrowth doesn’t apply to this early stage; when you’re running a new company, fast growth is table stakes.

Rather, as defined by the Harvard Business Review, hypergrowth is the steep part of the “S curve”, or the period in which a company achieves product-market fit and grows from infancy to maturity in a short amount of time. 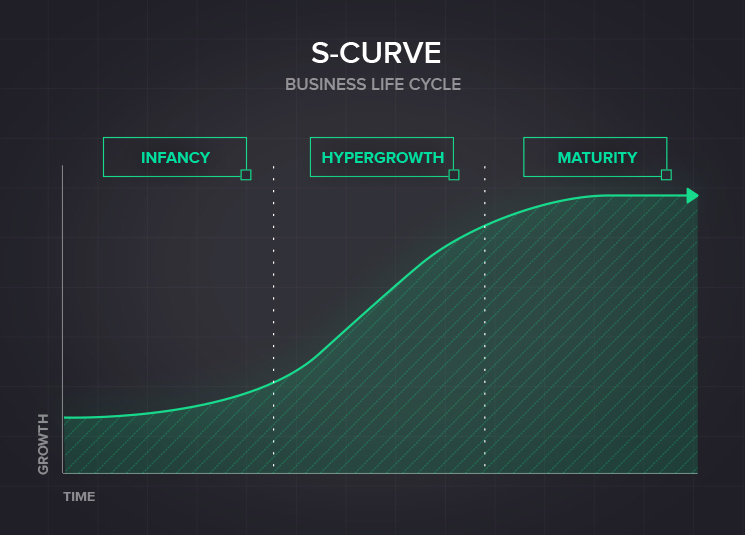 The immense leverage of new technology and business models has made hypergrowth equally available to startups and century-old firms with an eye for experimentation. Age and size don’t have to be barriers to scaling fast - as evidenced by companies as diverse as Skechers and LendingTree, which have achieved triple-digit earnings growth over the past three years.

At its core, any organization is a system of talent and principles working to achieve a common goal, and growth is the KPI of that system. We believe the hypergrowth phase can be optimized, maximized, extended, and “won.” It is paramount that founders and executives drive their organizations into the hypergrowth stage as quickly as possible, and maintain that growth for as long as possible because a company’s long-term market share and enterprise value are largely defined during hypergrowth.

To Optimize For Hypergrowth, Think Culture

So how do you set up your company for sustained hypergrowth, spending as much time as possible in the steep part of the S-curve?

There is no set of growth hacks or silver bullets that will ignite hypergrowth in your organization. It is all too easy for founders and executives to mistake early success in raising capital and public relations for sustainable growth, riding the resulting wave to a premature flameout because they neglected the foundation of that growth—think back to high-flying failures like Fab, Beepi, and Theranos.

The Slacks, Amazons, and Supercells of the world - along with companies like Douglas Dynamics, an industrials powerhouse that has achieved a three-year revenue CAGR of 46% far from Silicon Valley - understand that hypergrowth isn’t achieved through capital raises or PR, but by focusing on team and culture, the building blocks that grow alongside your company and ensure you win your battles day in and day out. In the words of Ben Horowitz, these cultural optimizations are “lead bullets” — they aren’t flashy short-cuts, and won’t spark hypergrowth in isolation, but they produce a platform for sustainable and rapid growth when implemented in unison.

We believe there are three cultural prerequisites to hypergrowth:

1. Your company is a fractal, and every branch needs a founder

A company experiencing hypergrowth is like a fractal tree:

Every few months, each branch on the tree grows new branches. Each branch represents a different function within your company (e.g., sales, marketing, recruiting), and each sub-branch is a process or sub-team within each function (e.g., the sales team for one of your verticals).

It is critical that every branch behaves like its own startup, pushing hard to double in unison - not necessarily in headcount, but in the outcomes that matter - with the rest of the company. As an executive, thinking about your organization in this way allows you to keep an eye out for lopsided growth and flag potential issues early. For example:

How does this mentality translate to culture? Early-stage executives are in a constant race against time, balancing multiple priorities to achieve product-market fit and grow to scale before exhausting their runway. When building a successful hypergrowth company, this mindset must extend to every part of the team.

When members of your team have a founder-eye perspective of the company’s priorities and challenges, they no longer experience rapid change from the passenger seat. Instead, your colleagues will feel empowered to drive rapid change, making intelligent decisions within the context of the company’s directions and needs, and freeing executives of the cognitive load of micromanaging processes that change daily as your organization grows.

When members of your team have a founder-eye perspective of the company’s priorities and challenges, they no longer experience rapid change from the passenger seat. They drive rapid change.

As a hypergrowth executive, it is your responsibility to monitor the growth of all branches of the tree, pruning or restarting nodes that are sputtering, and adjusting growth rate in the areas that need it. Don’t limit your focus to the branch that’s growing really fast. Don’t miss the forest for the trees.

As a hypergrowth founder, how do you adjust the growth rate in a particular branch of your company? To answer this, we can look to how growth is governed in nature, where the fundamentals of growth within an environment are well-defined.

In biology, population growth is governed by one of two functions: exponential or logistic. If the environment of a population is resource-constrained (e.g., land or food is limited), the population will exhibit logistic, S-curve growth, expanding rapidly before hitting the carrying capacity of that biosphere.

However, if an environment is not resource constrained, the population will exhibit exponential growth indefinitely, with the invading species (company) taking over entire continents (markets) over years or decades.

Carrying capacity is governed by:

In evaluating how to enable or throttle growth, a hypergrowth executive (or empowered team lead) must have full awareness and control of these levers. For example:

To ensure all branches of a startup’s tree have enough room to grow, a hypergrowth executive must use these levers to raise the environment’s carrying capacity as much as possible, ensuring that no branch is constrained due to artificial resource limitations.

Your job is to remove your team’s constraints.

In practice, this also means building a culture where resources are not siloed between different functions, but pooled and diverted to any idea that makes an impact. Every employee at your organization must know that they can count on more resources if and when they build something that works, regardless of the focus of their particular branch.

Ambitious executives typically drag their organizations through a brief hypergrowth phase, working intensely to capture value before preparing the company for an acquisition or burning out and settling into the stable end of the S-curve.

This is a vastly different mindset that we call the Founder’s Infinite Loop:

Here’s an example: Imagine a few of your growth hypotheses have paid off, and your company has started to grow 10-20% a month and feel like a rocketship.

While a growth executive may be thrilled and eager to ride the wave, a hypergrowth executive will be obsessing over how to balance the other branches of his startup: what will happen when you can’t recruit top performers fast enough to cash in on the growth, or when you can’t update operational processes fast enough to maintain the quality of service?

Now that you’ve hit an inflection point, how do you do everything possible to ensure that another inflection point follows? And another? This is the Founder’s Infinite Loop, and it isn’t just for founders—it’s for all executives, and your team should do their best to live it, too.

Hypergrowth Is a Marathon, Not a Sprint

There’s no doubt that optimizing culture for hypergrowth requires hard work on behalf of an organization’s leaders and its whole team. But the benefits of a hypergrowth mindset extend beyond the hypergrowth phase and into a company’s ability to grow as a mature operation.

Whether in the physical world or in an organization, any process of expansion creates cracks and fractures—they are a necessary part of growth. Executives who are destined to plateau at normal growth will examine those cracks and dismiss them for the sake of moving fast or because of external distractions.

But executives who understand hypergrowth recognize that growing fast has a way of turning little fractures into big ones. The key is building a culture that becomes a force multiplier in regulating and repairing the cracks, instead of enlarging them. By employing the tactics above to nurture a hypergrowth mindset in yourself and your team, you create a system capable of accelerating itself to rapid and sustainable growth.

tommy hulk
I have had a lot of harvest after watching this article from you! I feel it interesting, your post gave me a new perspective! I have read many other articles about the same topic, but your article convinced me! I hope you continue to have high quality articles like this to share with veryone! <a href="http://uspstrackingmap.com">usps tracking</a>
comments powered by Disqus